Bloodbath on Weed Street: One Man’s Fear is Another Man’s Opportunity - The Cannabis Investor

Bloodbath on Weed Street: One Man’s Fear is Another Man’s Opportunity

Just when we thought the cannabis sector was bottoming out a couple of big news stories have shaken the market to its core. Investor fortitude is facing its ultimate test. The vast majority of leading cannabis stocks have already corrected between 35% – 50% from their 2019 highs. Investors should seriously contemplate their actions when it comes to selling their core positions at these low levels. I am only referring to the high-quality companies. Not the crumby penny stocks.

More than likely this is just a temporary situation based on current market conditions. It is not permanent. If you’re panic selling because you believe the entire cannabis market is going to collapse than you shouldn’t be investing in this space in the first place. Stick to mutual funds and bonds. It’s no secret this market can be volatile at times, but big risks come with big rewards.

The Holy Grail of Market Catalysts

In reality, the cannabis market is in its infancy and the quote “We’re an inch into a marathon” certainly puts things into perspective. With an increasing amount positive news coming out of Washington D.C. recently the U.S. market looks like it could fully open up sooner than most experts expected. U.S. Federal cannabis legalization is the holy grail of market catalysts and will surely send marijuana stocks soaring.

The lifting of the Federal ban in the United States will likely be preceded by many smaller mini catalysts such as rescheduling or desheduling, states rights protections (new Cole Memo), and new cannabis banking legislation that would allow the major banks to serve cannabis companies without the fear of Federal punishment. All of these mini catalysts are on the near-term horizon and would surely fuel the market and prime it for the eventual explosion full U.S. nationwide legalization would bring. If things play out this way it would provide for larger overall market gains rather than if the U.S. legalized cannabis next week.

Buy When There’s Blood in the Streets

Big market corrections can be your friend. Like the old saying goes, “The time to buy is when there’s blood in the streets”. This saying dates all the way back to the 18th century and is credited to Baron Rothschild of the Rothschild banking family. The Rothschilds were known for their contrarian style that made them many fortunes buying stock during times of extreme panic selling.

Warren Buffett also employs a similar philosophy. Buffett has warned, “You pay a very high price in the stock market for a cheery consensus.” What he means by this is if everyone in the crowd agrees with your investment decision, then it’s probably not a good one. Going against the grain is often tough but it can pay off big time. Trust your gut next time you have an idea but the general market feels the opposite way.

If Rothschild or Buffett were investing in cannabis stocks today, they would very likely have some serious cash ready to deploy and go bargain hunting with. 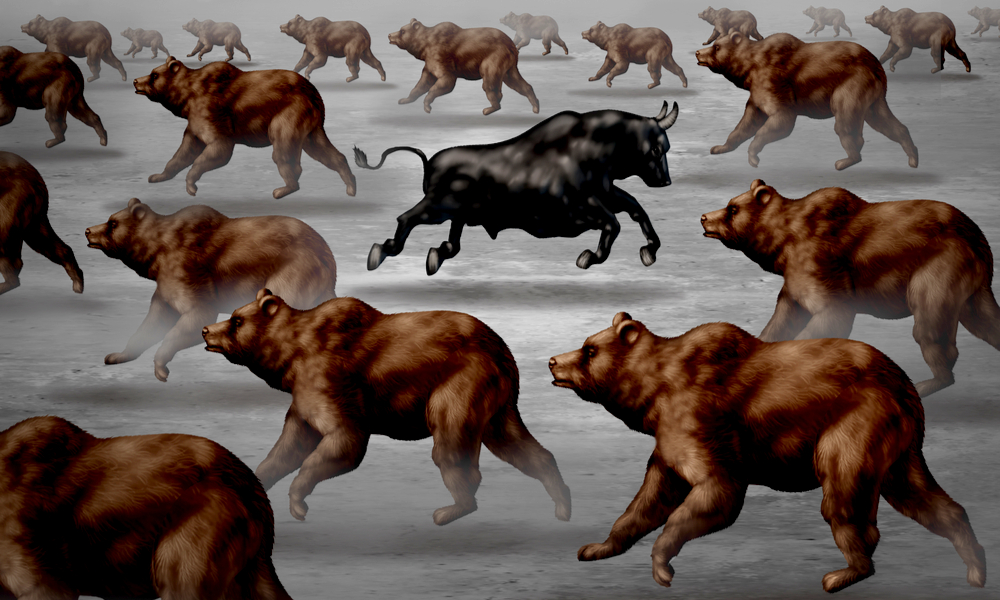 We are now over a week removed from the news that shocked the cannabis world when Canopy Growth (TSX: WEED) (NYSE: CGC) announced the firing our their founder, CEO and board member Bruce Linton. Linton was seen by many as the top CEO in the game and his removal certainly leaves a void in Canopy’s leadership and possibly the entire sector. We are likely seeing a delayed reaction in Canopy’s price action as investors took their time to digest the surprising news. Canopy’s stock has begun to really sell-off over the past few days as investors come to the realization that the new leadership may not be able to fill Linton’s huge shoes.

Although Canopy reported some large losses in their most recent earnings, Linton has stated publicly on many occasions that this was all part of their plan. Canopy’s plan was to expand rapidly into all feasible legal markets worldwide in order to lock up massive market share. The idea was to have short term earnings pain in return for long term financial gains. It’s a shame that Linton was not able to see his plan through after Constellation Brand’s (NYSE: STZ) new CEO Bill Newlands decided to mark his turf. Now it is up to Constellation to run a ship in unfamiliar waters without the ship’s long time captain.

It makes sense that investors feel uncertain about Canopy’s immediate future, but it doesn’t make sense for other companies that have nothing to do with Canopy to feel the selling pain as well. The market crowd is full of followers and Canopy has always been a stock that has led the market up or down and we are seeing that in action once again. Situations like this are what create the opportunities that lead to some of the biggest winning trades. You just have to be able to spot them. Put your emotions aside for a minute and ignore the noise of the market crowd. If everyone in the market is saying sell, then you should probably consider buying.

The firing of Linton could end up being a mistake, only time will tell. One thing we do know is that Linton will have no problems finding new opportunities. Linton stated on the Midas Letter podcast that he plans to spend more time working on Martello Technologies Group (TSXV: MTLO) (OTC: DRKOF) where he currently sits on the board as Co-Chairman. Just the brief mention of this was enough to send Martello’s stock soaring over 400% in just 5 days. Linton does envision getting involved in the cannabis space again but this time in the United States. We’ll definitely be keeping an eye out for whatever new cannabis venture Linton gets involved with.

Special Committee Forms to Put the ‘Trust’ Back in CannTrust

The Linton news started the small snowball and the bombshell Health Canada announcement from CannTrust (TSX: TRST) (NYSE: CTST) sent it rolling down the hill. The market’s fear has been growing in size daily which culminated in Friday’s ‘Bloodbath on Weed Street’. Each piece of news wasn’t enough to shake the market on its own, but when combined and amplified by the crowd over a few days it was enough to send the cannabis market fear meter through the roof. Irrational thoughts took over and investors began to unload cannabis stocks that have nothing to do with Canopy or CannTrust. Messages like “the game is over, better get out now” flooded the message boards causing even more fear. One piece of advice. Don’t ever listen to anything said in a stock market message board.

CannTrust’s worst nightmare began on July 8th when the company released a press release informing investors of their failed Health Canada compliance report. The company’s violation was the result of them growing cannabis in 5 unlicensed rooms at their Pelham, Ontario facility. As a result, Health Canada placed a hold on 5,200 kg of dried bud that had been harvested in those rooms. CannTrust in an attempt to save face with Health Canada put a voluntary hold on 7,500 kg of dried cannabis equivalent that was grown in these rooms but was now at its Vaughan facility.

To make matters worse and further propel CannTrust’s shares downward, the company announced on Thursday July 11th the formation of a special committee and the suspension of all cannabis sales. The company’s voluntary hold on sales was done as precaution while Health Canada conducts its review of their manufacturing facility. The forming of a special committee is never a good thing as we saw with Aphria (TSX: APHA) (NYSE: APHA) and their LATAM scandal and Namaste Technologies (TSXV: N) (OTCQB: NXTTF) and their situation involving former CEO Sean Dollinger. In both instances it led to the removal of the company’s CEO.

Shares of CannTrust’s stock are down over 48% in the last 5 trading sessions. The relative strength index (RSI) closed Friday at a mindboggling 10.30. In other words, never seen before oversold levels. It’s only a matter of time until the smart money steps in and begins accumulating a discount position, if they haven’t started already. The possibility of a takeover from an industry peer just went up big time. It would not be surprising to see a company launch a takeover bid for CannTrust in the near future. 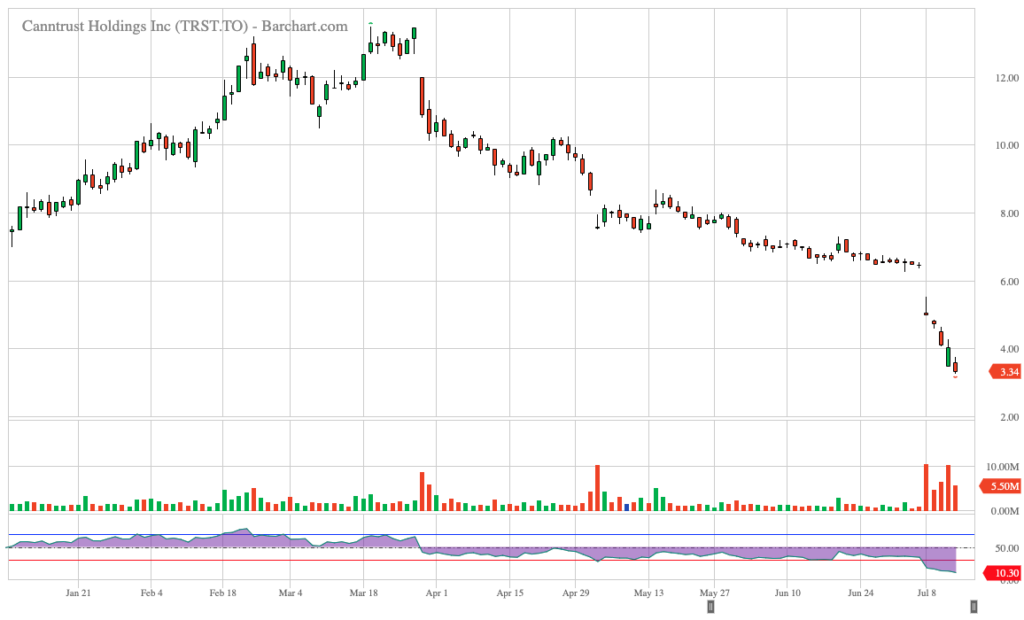 At the end of the day, we as cannabis investors have been in this situation before and because we are so soon into the game, there will ultimately be another major catalyst just around the corner that will flip the script and send the crowd into a frenzy once again. Fortunes are made buying good companies when things look like complete shit and the bottom is going to fall out. The fact is the industry foundation is rock solid and here to stay. As long as you make good decisions and are willing to take calculated risks there are enormous rewards waiting to be had. Personally, I see this latest market sell off as a good thing for investors. It has brought the share prices of the majority of quality cannabis stocks down to unthought of levels and thus created a much larger upside for investors to profit from on the next big run in the cannabis market.

Fortune favours the brave, trust your gut, block out the noise and don’t be afraid to trade against the grain.