This U.S. Cannabis Stock Appears to Be Way Undervalued and May Actually Benefit From a Second Wave of the Pandemic - The Cannabis Investor

As the U.S. begins to come out from its lockdown, we’re starting to see dramatic upticks in infections. Most states failed to adhere to recommendations from health experts and opened well before they were prepared. Adding fuel to the fire is the politicizing of wearing a protective face mask, which has been recommended as an effective means of minimizing the transmission of the virus. Not to mentioned mass protests and demonstrations across the nation, most of which didn’t even come close to following social distancing guidelines. With that said, all signs are pointing to an escalation of infections and a second wave of the pandemic. There is now a strong possibility that many states could be headed back to some form of lockdown or quarantine.

What does all of this have to do with cannabis? Well, in March and April, at the beginning of the lockdowns, there was a significant boost in cannabis demand and the legal marijuana industry was officially deemed as essential leading to a spike in sales nationwide. As we witnessed, then, when people were confined to their homes, cannabis sales rose substantially. The considerable increase in demand, in turn, creates an excellent opportunity for cannabis producers, especially those in states with current supply shortages.

A perfect example is the state of Michigan, which commenced adult-use cannabis sales in December 2019. Michigan’s recreational market has grown by leaps and bounds since the start of the new year, and just recently, state adult-use sales surpassed medical sales for the first time on a weekly basis. In addition to surging marijuana sales, Michigan is experiencing state-wide product shortages. While the current situation brewing in the Great Lakes State certainly bodes well for the leading cannabis producers and retails, there may be an even bigger opportunity for investors, which can actually invest directly in the state of Michigan’s top cannabis company.

The King of Michigan Cannabis

The clear cut leader in Michigan, which just recently went public and controls a dominant 22% share of the market goes by the name Red White & Bloom (CSE: RWB) (OTCQX: RWBYF) and compared to its multi-state operator (MSO) peers, is trading at an extremely attractive valuation.

The bulk of Red White & Bloom’s operations are currently based in Michigan, where the company got its start as MichiCann and, as mentioned, owns a whopping 22% share of the legal Michigan cannabis market. RWB’s holding in the state of Michigan, PharmaCo, was recently awarded nine additional cultivation licenses, which management believes could generate $200 million in revenues annually. In all, the company currently has ten dispensaries and five cultivation facilities throughout the state, and the company expects to open up eight more dispensaries in 2020, nearly doubling its retail footprint in Michigan. The added cultivation capacity will also allow the company to wholesale its products to other retailers. 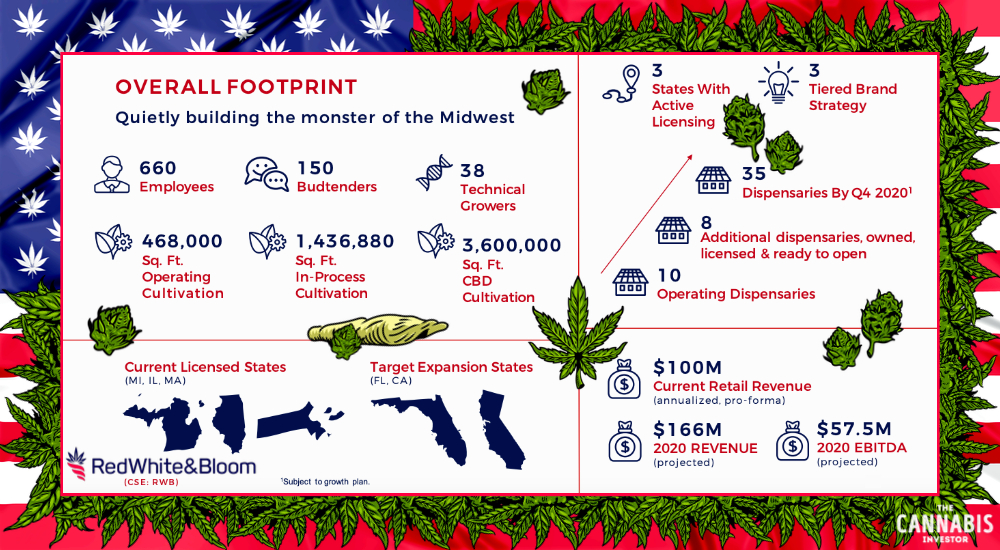 Expanding upon its dominating position in Michigan, Red White & Bloom entered the Illinois market by acquiring a 3.6 million sq ft indoor hemp/CBD cultivation and processing facility, which is said to be the world’s largest. RWB’s Illinois facility is capable of producing and processing 600,000 lbs of hemp biomass per year, which the company intends to use to produce health and wellness products derived from CBD and other cannabinoids. RWB already has an initial $25 million offtake agreement with a drug company for cannabis-derived pharmaceutical compounds. The company’s management team, led by CEO Brad Rogers, has plans to convert and license a portion of the facility for the production of high THC products, putting the company in a position to be a serious player in Illinois too. The Illinois market is already estimated to be worth over $2.5 billion and in the first three months of adult-use sales, generated $110 million. Some are already predicting that Illinois could become the most lucrative cannabis market in America.

Building off its midwest expansion, RWB is establishing itself in the highly lucrative Massachusetts market, with the company already securing two coveted cultivation licenses as well as a processing license. RWB has also acquired the property needed to build a 50,000 sq ft state of the art processing facility. RWB says it will focus on wholesale for the undersupplied Massachusetts cannabis market initially and is considering possibly retail strategies in the future once its wholesale business is firing on all cylinders.

“We’re very disciplined in what we’re doing. We call ourselves Super State Operators. We’re not a multi-state operator. We’re super state, meaning that we go in [states] with a big footprint, and we dominate wherever we go.”

Unlike many MSO’s, RWB is rolling its brands out nationally right from the jump, which should save the company a great deal of money on purchasing costs and R&D. RWB intends to release products that will appear to virtually all cannabis consumers with products planned to sell at low, medium and high price points.

Most recently, Red White & Bloom inked a blockbuster deal with the most renowned cannabis brand of all-time in High Times. The licensing agreement with High Times is truly a game-changer for RWB. The exclusive partnership will soon see all of RWB’s current and future dispensaries rebranded under the High Times brand name, which has been synonymous with cannabis for over 40 years. RWB’s High Times branded stores will manufacture and distribute High Times branded cannabis products, including flower, vapes and edibles.

“Closing this deal with the only real iconic brand in cannabis and working alongside the first-class people that come with it, is just the beginning of another 45-year journey that will define RWB and High Times in this chapter of history as the best-in-class for generations to come,” commented RWB Chairman and CEO, Brad Rogers on the company’s landmark High Times deal.

RWB Appears to Be Very Undervalued

Red White & Bloom is projecting 2020 revenue of $166 million and EBITDA of $57.5 million according to the company’s most recent investor presentation. Those are serious numbers that should soon catapult the company into the upper echelon of the burgeoning U.S. cannabis industry. Still, there is currently a disconnect between future earnings and RWB’s current share price. The situation has created an opportunity for investors that doesn’t present itself that often. If management forecasts are correct, then the price of RWB’s stock stands to rise substantially from current levels.

Below you’ll find a table comparing RWB to its competitors. Note RWB’s Enterprise Value and EV/EBITDA Ratio relative to its peers as it could indicate the company’s stock is trading at a bargain. 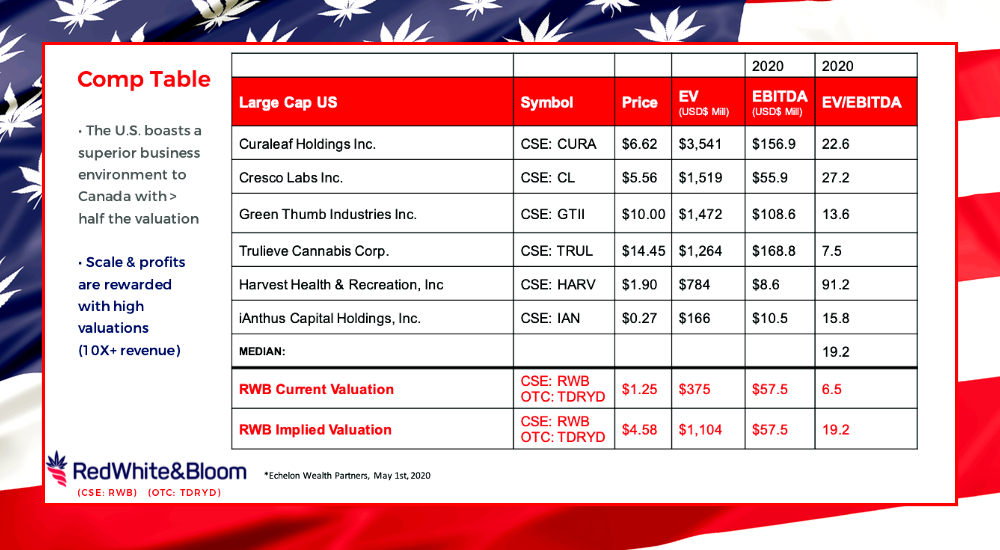 As the saying goes, the proof is in the pudding, which may explain the cheap valuation on RWB shares as some investors may be waiting for the company to release its financials for the first time as a public company. RWB has the opportunity to deliver on its earnings report, which is expected in the coming weeks. However, as is almost always the case with the wait and see approach, by the time a company’s earnings are released (assuming they are good), the share price of the stock will have usually risen significantly, leaving those that took the risk with all the profits.

It’s simple, no risk, no reward. For those that believe in RWB’s vision and the vast potential of the United States cannabis market as a whole, Red White & Bloom, at its current valuation, is likely offering the best bang for your buck in the sector. If RWB’s numbers are strong as anticipated, the stock should rally in a big way and start to fall in line with the valuations of its peers, while in the process wiping away the current valuation disconnect. Until then, the attractive share price could be an excellent opportunity for investors to accumulate a position in what could be the next great American cannabis story.