The summer months have historically been bearish times for cannabis equities. While, on the contrary, the fall season has almost always been extremely bullish for pot stocks.

Thankfully for cannabis bulls, the summer is over, and the fall season has arrived.

Will history repeat itself? It appears so. Focusing specifically on the U.S. cannabis sector, a perfect storm seems to be brewing that could see the market set up for a big-time rally.

For investors looking to play the impending American cannabis boom, here are 3 U.S. pot stocks and 2 U.S. cannabis ETFs investors should have on their trading radars.

Last week, the U.S House passed a large-scale defence spending bill, which included an amendment to protect banks and other financial institutions that work with state-legal cannabis businesses from being punished by the federal government. To make it to President Biden’s desk to be signed into law, the bill will need to be approved by the Senate, which most agree poses a stiffer challenge than the House.

“This will strengthen the security of our financial system in our country by keeping bad actors like foreign cartels out of the cannabis industry. But most importantly, this amendment will reduce the risk of violent crime in our communities. By dealing in all cash, these businesses and their employees become targets for robberies, assaults, burglaries and more. This is a public safety and a national security matter—very germane to the issues at hand, dealing with foreign cartels and particularly the cash that is developed by this business that leads to crime,” commented Rep. Ed Perlmutter (D-CO) days before the House vote.

Sponsored by Rep. Ed Perlmutter (D-CO), the Secure and Fair Enforcement Banking Act (SAFE Act) has now been approved by the House five times, with cannabis advocates hoping the firth time’s the charm.

Just one day after the House approved the SAFE Banking Act, it was announced that legislation to legalize cannabis at the federal level would be voted on by the House Judiciary Committee this week.

Introduced by Judiciary Committee Chairman Jerrold Nadler (D-NY), the Marijuana Opportunity, Reinvestment and Expungement Act (MORE Act) would federally decriminalize cannabis, remove marijuana from the controlled substances list and eliminate criminal penalties for an individual who manufactures, distributes, or possesses marijuana. The bill will also invest in communities that have been disproportionately harmed by the failed War on Drugs.

“Many of these bills were reported out of the committee and passed by the full House of Representatives last Congress, and I look forward to working with all my colleagues once again to get these bills through Congress and on to the president’s desk,” said chairman Nadler.

Last December, the MORE Act was passed by the House but failed to advance in a Republican-controlled Senate. With Democrats now in control of all three branches of the federal government, including the House and the Senate, cannabis advocates are optimistic of the bill’s chances this time around.

“We are excited to see Chairman Nadler and House leadership move forward once again with passing the MORE Act. Public support and state-policy demand for repealing federal marijuana criminalization has never been higher and Congressional action on this legislation is long overdue. The days of federal marijuana prohibition are numbered,” stated NORML political director Justin Strekal. 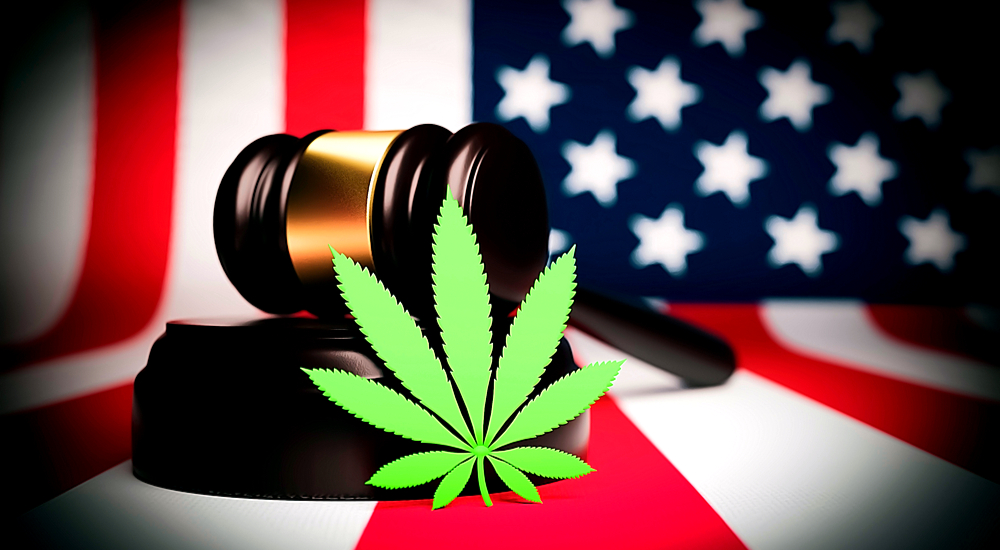 Additionally, there is another piece of legislation looking to legalize cannabis federally. Led by Senate Majority Leader Chuck Schumer (D-NY), Finance Committee Chairman Ron Wyden (R-OR) and Sen. Cory Booker (D-NJ), the Cannabis Administration and Opportunity Act (CAOA Act) would also deschedule cannabis federally. In addition, the CAOA would remove cannabis from the list of controlled substances and eliminate criminal penalties for an individual who manufactures, distributes, or possesses marijuana. The bill will also expunge prior cannabis convictions, allow people to petition for resentencing, maintain the authority of states to set their own marijuana policies and provided a path for responsible federal cannabis regulation similar to the alcohol and tobacco industries.

“The War on Drugs has too often been a war on people, and particularly people of color. Not only will this legislation remove cannabis from the federal list of controlled substances, but it will also help fix our criminal justice system, ensure restorative justice, protect public health, and implement responsible taxes and regulations,” commented Sen. Chuck Schumer.

“Cannabis prohibition, a key pillar of the failed war on drugs, has caused substantial harm to our communities and small businesses, and especially for communities of color. It’s as simple as this: Senators Booker, Schumer and I want to bring common sense to the federal government, end prohibition and restore the lives of those hurt most and set them up for opportunity,” added Sen. Ron Wyden.

The Stage is Set

In closing, a combination of strong technicals and near-term catalysts has the U.S. cannabis sector on the verge of a potentially massive bull market rally. With the likely run in its infancy, the time is now for investors to place their bets. Should the long-standing federal cannabis prohibition finally come to an end, it would remove the cloud of uncertainty that has loomed over the U.S. sector for years and kept many of the big money institutional players watching from the sidelines. If one or more of the above cannabis reform bills pass the Senate, it could open the flood gates to new retail and institutional buying in the cannabis sector at levels not yet seen before. This potential tsunami of new investment capital could very well result in a boom in U.S pot stocks that absolutely dwarfs the 2018 Canadian bull run.

How will things play out? Only time will tell, but one thing is certain, the stage is set. Now, it’s time for the politicians to deliver on their promises.

All things considered, the obvious follow-up question from investors would likely be, how can one position themselves to profit from the potential upcoming run in U.S. cannabis stocks?

There are many ways investors can play it. Risk-averse investors could consider top U.S.-focused cannabis ETFs such as the AdvisorShares Pure U.S. Cannabis ETF (NYSE Arca: MSOS) or the Horizons U.S. Marijuana Index ETF (NEO: HMUS).

While those investors with a higher risk tolerance might be better suited investing in individual pot stocks with the highest potential upside, as that strategy, with the correct stock picks, will likely outperform the sector’s top ETFs by a wide margin.

With that said, here are three U.S. pot stocks to consider as we embark on this potentially historic American cannabis boom.

“We’re very disciplined in what we’re doing. We call ourselves Super State Operators. We’re not a multi-state operator. We’re super state, meaning that we go in [states] with a big footprint, and we dominate wherever we go,” explained Rogers in an interview last year.

Trulieve (CSE: TRUL) (OTCQX: TCNNF) is a vertically integrated “seed-to-sale” multi-state operator (MSO) and the clear-cut leader in the state of Florida. The company boasts an impressive 48% share of the Florida market. Trulieve has 85 retail stores in Florida and 90 nationwide. The company continues to expand into new state markets, including Massachusetts, Pennsylvania, Connecticut and West Virginia. With Trulieve’s acquisition of fellow MSO Harvest Health (CSE: HARV) (OTCQX: HRVSF), the company will add several additional states to its already vast arsenal.

ALSO READ: Creso Pharma to Uplist to the NASDAQ