Cannabis Declared Essential Amid COVID-19 Crisis, a Monumental Moment for the Legal Industry - The Cannabis Investor

Cannabis Declared Essential Amid COVID-19 Crisis, a Monumental Moment for the Legal Industry

United States federal laws and cultural naysayers be damned — cannabis has been declared an essential service by a growing number of U.S. states and Canadian provinces.

“Most of the American public and an increasing number of government leaders stopped buying into the demonization of cannabis years ago,” says Karen O’Keefe, Director of States Policies, Marijuana Policy Project. “Now, not only have two-thirds of states recognized that medical cannabis should be legal — with 11 legalizing adult-use — many are recognizing that safe access to cannabis is essential.”

Erik Altieri, Executive Director of the National Organization for the Reform of Marijuana Laws (NORML), shared a similar perspective, arguing that U.S. public policy is finally starting to catch up with views of the vast majority of the American public.

“The recognition by our government officials that cannabis is indeed not just here to stay, but an essential part of life for millions of Americans — particularly in the patient community — is a welcome move in the right direction,” says Altieri. “It is also a move that could not have come at a better moment for those who still require access to maintain quality of life during these trying and troubled times.”

In an effort to conform with the necessary social distancing, some states have begun to enact new policies such as expanded delivery, curbside pickup, and limiting the number of patrons in dispensaries. Other states are permitting doctors to issue cannabis prescriptions through telemedicine, as opposed to in-person appointments. Cannabis law firm Vicente Sederberg LLP has even issued a set of voluntary guidelines for cannabis companies to follow in the current climate.

Based on early numbers, the efforts to keep cannabis products accessible in the U.S. amidst the global health pandemic have been working, as sales are up considerably. Apparently, ‘panic buying’ has moved beyond toilet paper to include marijuana products and even cannabis stocks. 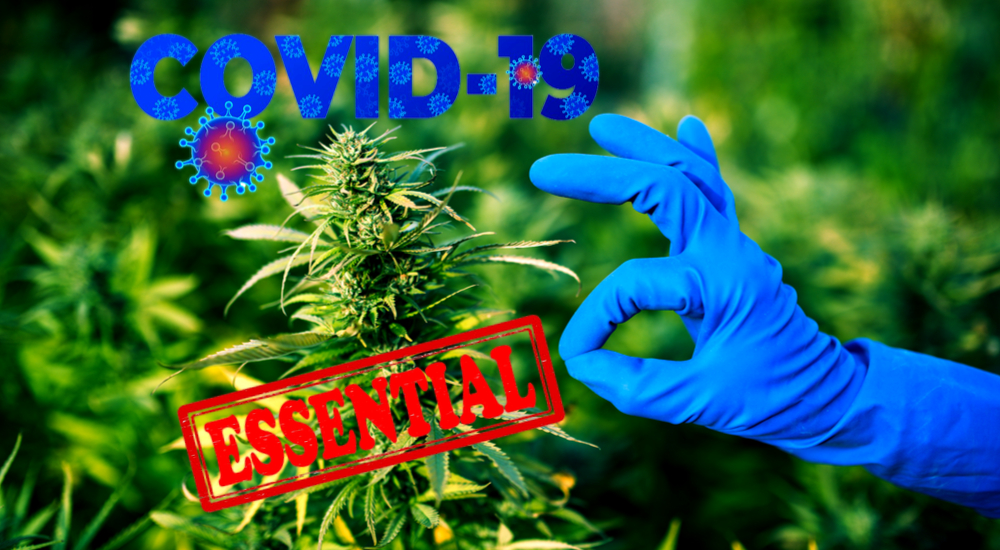 Like many states south of the border, a number of Canadian provinces have deemed cannabis an essential service in the face of the COVID-19 public health emergency. When cities and provinces began identifying which services were essential — and could, therefore, remain operational — it was no surprise to see services such as grocery stores, pharmacies, liquor stores, hospitals, long-term care facilities, and emergency responders on that list. However, some areas of the economy that made the essential list — such as cannabis — were less obvious.

So while industries such as hospitality, tourism, travel, and entertainment (i.e. public events) have all been stopped in their tracks, cannabis production and distribution in Canada continue to march on.

In Ontario, Canada’s most populous province, Premier Doug Ford, announced his government’s List of Essential Services on March 23, 2020. The cannabis inclusion was packaged along with alcohol: “Beer, wine and liquor stores and alcohol producers, and stores that sell beer and wine through arrangements with authorized providers; cannabis stores and cannabis producers.” Ontario’s decision to deem cannabis as an essential industry resonated throughout the province, as roughly half of Canada’s federal cannabis license holders (142 of 337) are located in Ontario, along with approximately 50 regulated dispensaries.

“We call on workplaces that remain open to be vigilant and to enforce the highest possible standards of cleanliness and caution as we continue the fight together against COVID-19,” explained Vic Fedeli, Minister of Economic Development, Job Creation and Trade.

While no government officials dare say it, the reality is that these are incredibly stressful times, and cannabis is a go-to destresser for millions on both sides of the border.

Whether we call it managing anxiety, self-medicating, or finding a relatively safe way to calm down, it’s clear that many among us are using cannabis to r-e-l-a-x. And despite the media’s never-ending tendency to make light of cannabis use, it’s actually no joke.

“It’s not bemusing at all,” explains Steve DeAngelo, co-founder of Harborside Health. Steve is a well-respected cannabis advocate and is known by many as the “Father of the Legal Cannabis Industry.” “It flows out of the life experience we’ve had with cannabis in our society. Cannabis is the first line of defence for many medical conditions that would otherwise send people to the doctor, hospital or pharmacies at a time when we’re trying to keep people away.”

“The mental qualities cannabis imparts include serenity, calm, reflection, and compassion are something that are going to be in short supply and very valuable,” DeAngelo continued. “We see a significant drop in consumption of more dangerous drugs when cannabis is available. If legal cannabis is no longer available, we’d essentially be telling people to drink more, take more tranquillizers and use more opioids when we’re at a time when none of those behaviors are particularly helpful.”

Precisely what the doctor ordered for these anxious and fearful times.

Also Read: These 2 Companies are Turning LSD, Magic Mushrooms, Ketamine and MDMA into the Next Blockbuster Drugs