Cannabis has long been known to provide a host of medicinal benefits. Users have proclaimed the plant’s ability to treat pain, anxiety, insomnia, epilepsy, lack of appetite and a host of other ailments. The long list of positive health benefits led to California legalizing medical cannabis in the mid-’90s and since then, other states have followed the Golden State’s lead. There are now 30 U.S. states with medical marijuana programs in effect.

Over the last decade, recreational cannabis has been legalized nationwide in Canada as well as 11 states in America. One of the most recent states to legalize adult-use cannabis was Michigan, which has a population of nearly 10 million people. To put that into perspective, Michigan has roughly 1/3 the population of Canada.

Since Michigan’s recreational sales commenced in December 2019, both medical and adult-use cannabis sales have experienced a huge increase in demand. Weekly medical sales have almost doubled and weekly recreational sales have soared over 800%. For the period of June 8 – 14, adult-use sales totalled $10.02 million surpassing medical sales for the first time on a weekly basis, with total medical sales coming in at $9.97 million. These figures will likely continue to climb as Michigan’s marijuana industry matures with experts projecting the overall market to grow to more than $1.5 billion annually.

The legal cannabis (both medical and recreational) market in Michigan has already reached $20 million in weekly sales. As mentioned, weekly recreational sales outweighed medical sales for the first time, despite medical dispensaries outnumbering adult-use dispensaries by nearly 3 to 1 in the state.

The rise in recreational sales compared to medical sales makes sense, as many consumers with questionable or even legitimate ailments no longer need to go through the trouble of obtaining and updating a medical cannabis card. In fact, since adult-use sales began, the medical cannabis patient count has dropped by 7% in the state.

The adult-use marijuana market in Michigan has plenty of room to grow with 1,400 local governments still outlawing recreational sales. As the tax dollars continue to flow in and residents tire of driving long distances for legal pot, expect to see these regulations eased.

All in all, since December 2019, Michigan has generated total adult-use cannabis sales of $138 million. During that same period, medical sales totalled $473 million and the state of Michigan collected $22.9 million in sales and excise taxes.

Leading the charge in the burgeoning Michigan marijuana market is Red White & Bloom (CSE: RWB) (OTCQX: TDRYD). The newly public company recently made its highly-anticipated trading debut on the Canadian Securities Exchange (CSE) after completing a merger with Tidal Royalty. RWB currently boasts a dominating 22% market share in Michigan, more than any other company in the state. RWB has also acquired additional licenses (41 in total) that will allow the company to nearly double its dispensary count in the state, as well as increase its cultivation and manufacturing capacity.

“We’re very disciplined in what we’re doing. We call ourselves Super State Operators. We’re not a multi-state operator. We’re super state, meaning that we go in [states] with a big footprint, and we dominate wherever we go,” stated RWB CEO Brad Rogers as he explained the term super state operator during a recent interview. 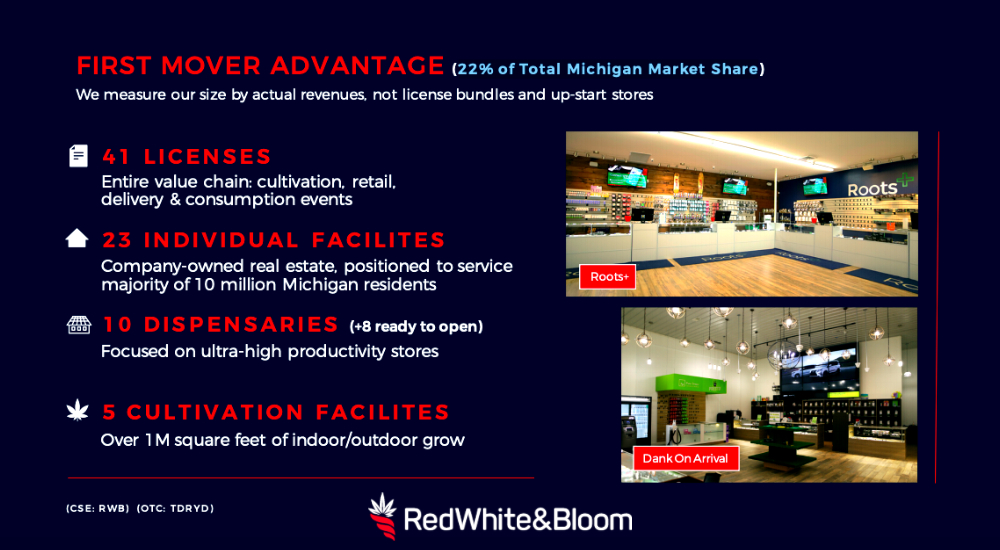 Looking to become the leading Midwestern cannabis company, RWB has entered Illinois, where the state marijuana market is expected to eclipse $2.5 billion. The company recently purchased a turn-key, 3.6 million sq ft hemp CBD production facility. The Illinois facility is capable of producing large amounts of high-quality hemp and CBD flower, which can also be used to create other high margin extract products. RWB already has its first offtake deal in place to supply in excess of $25 million worth of CBD distillate in 2020.

The newest market for Red White & Bloom is Massachusetts, a limited license state that has been very lucrative for the companies that have been able to obtain a license. RWB has acquired licenses for processing and cultivation as well as a wholly-owned 2.8-acre parcel of land, where the company plans to construct a 50,000 sq ft state of the art processing facility. RWB intends to utilize the future facility to manufacture branded products for distribution to retail outlets throughout the state. Much like in Illinois, management will announce its retail game plan once its cultivation and processing facilities are up and running.

RWB plans to roll out each of its brands and products across all the markets the company is operating in, as opposed to having unique products in different states, which is common among other U.S. multi-state operators (MSOs). This strategy will save the company a great deal of money on R&D, packaging and logistics, which will lead to higher margins and likely, greater shareholder value.

Red White & Bloom’s management, led by cannabis industry legend Brad Rogers, recently closed a landmark licensing deal with the most dominant cannabis brand of all time, High Times. The agreement gives RWB exclusive rights to the High Times brand in the states of Michigan, Illinois and Florida. The plan is to rebrand all of RWB’s existing/future dispensaries to High Times dispensaries, as well as rollout High Times branded products. The deal also gives RWB access to the Culture brand, which will focus on high-quality CBD products. 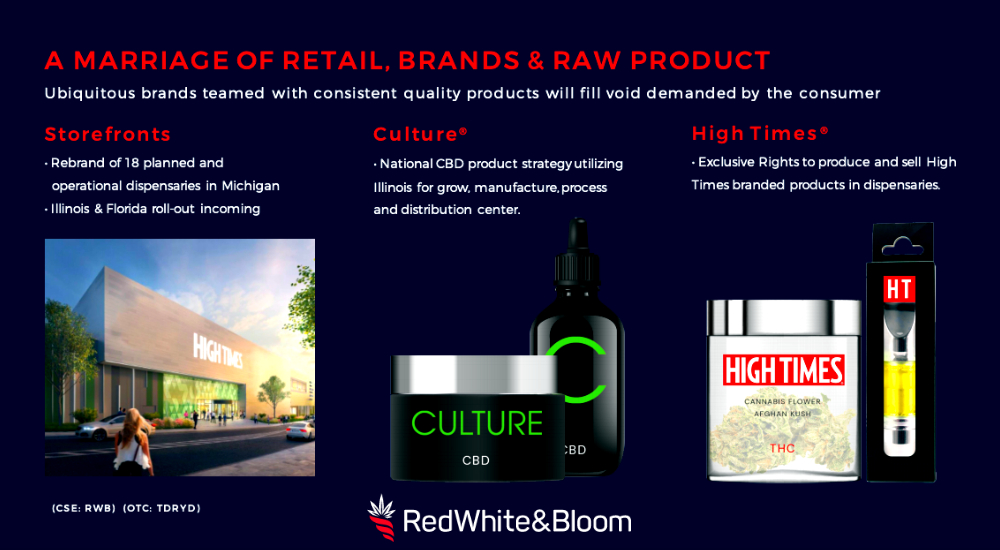 The Michigan recreational cannabis market has gotten off to a hot start and is expected to grow substantially from here. Red White & Bloom is the clear cut leader in the Great Lakes State and investors should expect the company to continue its aggressive but calculated expansion with additional dispensaries and production facilities on the horizon.

Meanwhile, management is executing its game plan in the valuable Illinois and Massachusetts markets, with dispensaries and additional facilities expected in the near future. With RWB’s world-class leadership, it’s reasonable to expect the company will dominate these cannabis markets in the same fashion as Michigan.

Shares of Red White & Bloom (CSE: RWB) are in the final stages of a Bull Pennant technical chart formation. Hence the name, bull pennants are bullish continuation patterns that form during the period of consolidation that follows a sharp move to the upside. As the support and resistance trend lines converge, the chart’s appearance will resemble a baseball pennant.

As is typical with this type of technical chart formation, volume should be decreasing as the stock’s trading range continues to tighten like a coil. Investors should be on the lookout for a spike in trading activity to signal a potential breakout as the price approaches the apex of the Bull Pennant pattern.