As the COVID-19 pandemic continues to rage in the U.S., cannabis companies are excelling even as other industries flounder. Having been deemed essential in every state where it is legal, cannabis sales have blossomed since lockdowns began nearly five months ago. The country’s newest legal market, Illinois, announced recently it yet again broke its monthly sales records with $47.6 million in total sales in June. Other states are experiencing similar surges in demand. The cannabis industry has become so large that it recently surpassed the NBA in revenue.

Given the boom and the numerous tailwinds affecting the industry, it’s not surprising that cannabis companies have been extensively discussing consolidation. No deal has been more significant than Curaleaf’s (CSE: CURA) (OTCQX: CURLF) acquisition of Grassroots, making the newly combined entity the largest cannabis company in the world by revenue. Even Aurora Cannabis (TSX: ACB) (NYSE: ACB) (FRA: 21P) and Aphria (TSX: APHA) (NYSE: APHA) (FRA: 10E), two of the largest Canadian licensed producers (LPs), have discussed a possible merger.

Of course, not all mergers and acquisitions are created equal, especially in the cannabis industry. Over the past few years, a number of companies have grossly overpaid for assets, resulting in write-downs and sell-offs.

Red White & Bloom believes that its recent acquisitions have come at much more attractive prices, leading to increased shareholder value.

Red White & Bloom Might Be the MSO with the Most Upside

Red White & Bloom (CSE: RWB) (OTCQX: RWBYF) is the most recent large U.S. multi-state operator (MSO) to go public after the company made its highly-anticipated trading debut on the Canadian Securities Exchange (CSE) in early June of this year. RWB arose from the combination of privately-held MichiCann and publicly-traded Tidal Royalty. The company is led by CEO and Chairman Brad Rogers, a highly successful veteran of the Canadian cannabis industry. Rogers previously founded one of the sector’s first public companies in Mettrum Health Corp., which was later acquired by Canopy Growth (TSX: WEED) (NYSE: CGC) (FRA: 11L1) for $430 million, marking the first major merger in the industry. Roger’s extensive experience, combined with the seasoned management team he has surrounded himself with, will serve RWB very well in its pursuit of becoming a dominant player in the cannabis industry.

While Red White & Bloom plans to one day establish operations across the country and become one of the largest cannabis companies in the U.S., the company’s current focus is on the Midwest, specifically Michigan and Illinois.

RWB, via its current investment, is the market leader in Michigan, boasting a dominant 22% market share in the Great Lakes State. RWB’s current Michigan footprint includes ten dispensaries in Michigan and additionally has 8 more ready to go; the company’s existing and in-process cultivation in the state measures over 500,000 square feet.

Meanwhile, in Illinois, RWB operates the world’s largest indoor hemp cultivation facility. The hemp/CBD facility measures in at 3.6 million square feet and is capable of producing 600,000 pounds of CBD rich biomass annually. While the company is exclusively growing hemp at the moment, RWB plans to convert a portion of the facility into high-THC cannabis production and break into the $2.5 billion Illinois cannabis market. 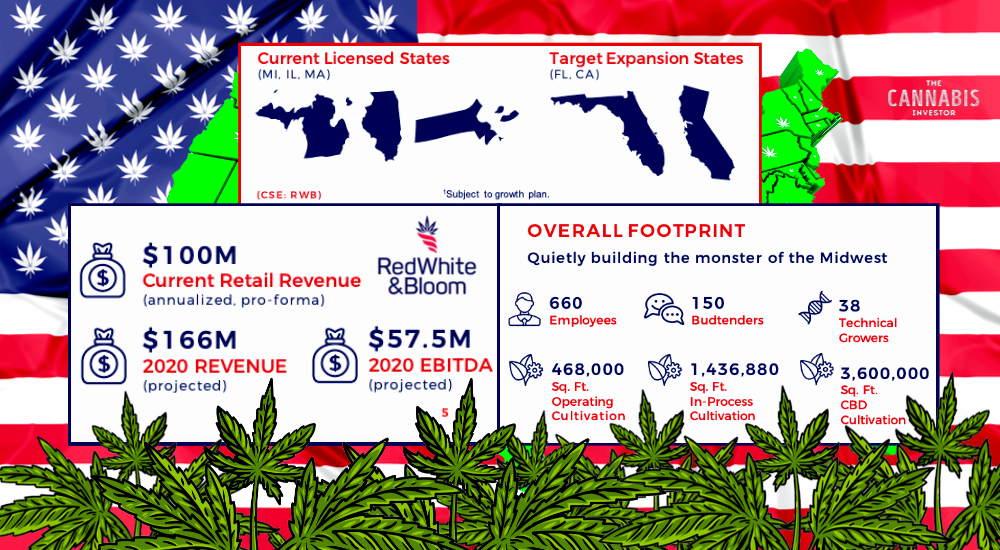 RWB has begun to expand out of the Midwest, first in Massachusetts, then in California, Florida and Oklahoma.

In Massachusetts, the company has obtained three licenses: two for cultivation and one for processing. RWB management has also secured a parcel of land that is zoned for cannabis cultivation/processing. Red White & Bloom intends to use this future facility to wholesale RWB products to other retailers throughout the state. Once the company’s cultivation/processing capacities are sufficient, management plans to open retail outlets stocked with its own products.

Red White & Bloom is entering California and Oklahoma through the Platinum Vape deal.

Knowing the value of entering the California cannabis market, as well as recognizing an opportunity to increase shareholder value, RWB decided to acquire leading cannabis derivative producer Platinum Vape (PV). PV products can be found in over 700 retail locations across three states (CA, MI, OK). Recognizing the value that PV can bring to the newly combined company, Platinum Vape’s founders will stay with the company and manage the PV line as well as bring RWB’s brand to life through its colorful brand personality, because, of course, life is better in Platinum.

The deal to acquire PV appears quite lucrative for RWB shareholders. Despite PV generating over $70 million in profitable revenues each year, RWB is only paying $35 million in cash upfront. While the agreement allows up to $25 million in additional incentives to be paid to PV founders one year from closing, this future payment is contingent on the continued growth of PV revenues. If PV’s founders reach all of their milestones, the total consideration will be $60 million, less than one year of current revenues. Of course, to achieve these millstones, revenues will need to rise above $70 million, making the terms of the deal even more attractive for RWB.

Platinum’s founders see the upside in the stock in the long-run, which could make them much more than the headline $60 million at the end of the day. Investors should always take note of what the smart money is doing and tag along for the ride.

When RWB shifts from a mid-cap company to a large-cap company, they could very well get a “market re-rating” shifting up the valuation of both firms in the process as it collectively becomes “more investable” to large investors. There’s also the cost savings that come from merging the two firms and eliminating some fat.

Obtaining a profitable company for less than its annual revenues would be considered a coup in most industries, but is especially impressive in the cannabis space, where companies have time and again overpaid for assets. Perhaps most infamous was Aurora’s acquisition of MedReleaf for C$2.6 billion in 2018.

The main highlights of the deal were three production facilities, with peak production estimated at 140,000 kgs annually. Today, only one of these facilities is in operation, the other two having been closed and/or sold off. The remaining facility, now known as Aurora River, is capable of producing 28,000 kgs of cannabis per year. Given the C$2.6 billion price tag, this level of production is a pittance, making the acquisition an unmitigated disaster for Aurora shareholders.

Overpaying for assets isn’t strictly a Canadian problem. Certain U.S. companies have also made considerable missteps by overpaying. Most recently, struggling cannabis firm iAnthus Holdings (CSE: IAN) (OTCQX: ITHUF) (FRA: 2IA) announced a $235 million write off, mostly related to the goodwill they booked when they acquired MPX Bioceutical for $1.6 billion in early 2019. With over $400 million in goodwill and intangible assets remaining on their balance sheet, compared to revenues of under $80 million, iAnthus will likely be writing off most or all of that amount over the coming quarters.

This prudent merger of RWB x PV could prove to be a harbinger for a rosy future for the U.S. cannabis industry for doing something that has become quite taboo—creating value. 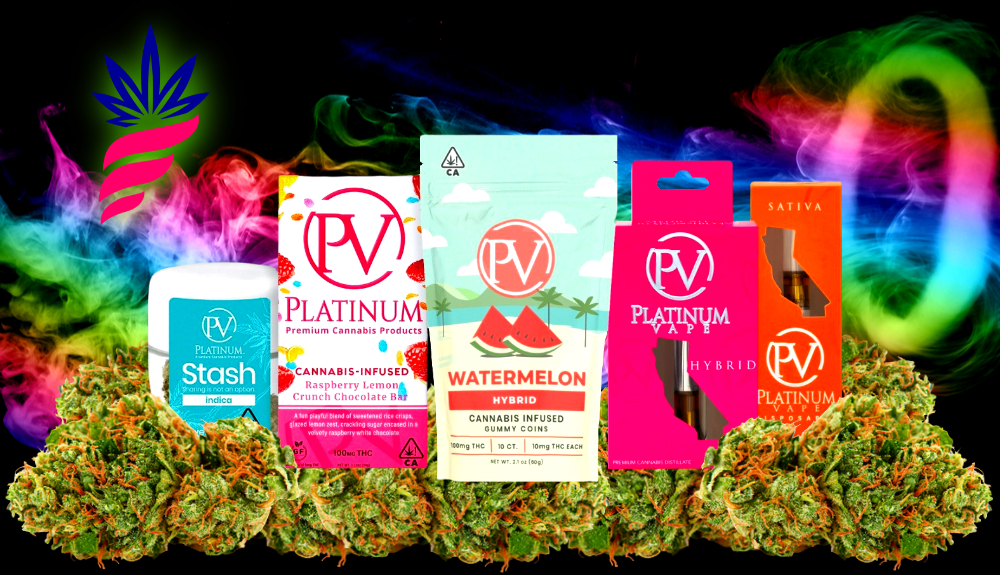 Aurora and iAnthus are just the tip of the iceberg when it comes to cannabis firms overpaying for assets. A host of other firms, public and private alike, have fallen victim to the same trap of over-promising and under-delivering. The inevitable write-downs and sell-offs have resulted in shareholders seeing their investment slashed by as much as 90% in some companies.

Red White & Bloom is taking a more measured approach to growth. RWB’s focus is on profitable operations that can be expanded with the capital that the company can provide. Platinum Vape has proven itself to be a high-quality, profitable company. The fact that RWB was able to acquire PV at such attractive terms is a huge win for both company’s shareholders. Look for RWB to demonstrate similar prudence when they make their next acquisition(s). 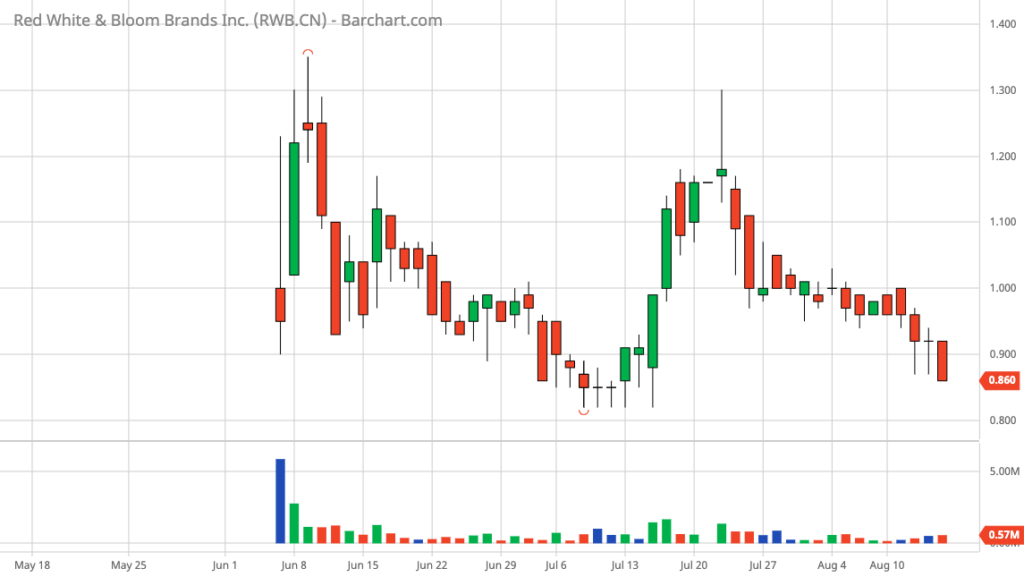