Patents for Psychedelics: “We Have the Potential to All Be Winners if We Do This Right” - The Cannabis Investor

Patents for Psychedelics: “We Have the Potential to All Be Winners if We Do This Right”

Depending on your philosophical outlook about what the psychedelics industry is supposed to do, a patent could be critical to making a business profitable—or it could become a roadblock to true success for everyone.

Once a patent is issued, the USPTO rules state, a patentee must enforce the patent without the aid of the USPTO. Though this is a relatively new industry, patents for psychedelics have been around for years. For example, LSD (U.S. Patent No. 2,810,723, “Lysergic Acid Derivatives Isolated at the Indol Nitrogen”) was issued to Sandoz, Ltd. on October 22, 1957.

Psilocybin was first synthesized by Sandoz in 1958, U.S. Pat. No. 3,075,992, and patented on January 29,1963. A quick search of the USPTO site shows that there are currently hundreds of patents related to LSD and Psilocybin products and formulations.

But as the psychedelics industry matures and more research leads to more product development, nearly every day, another psychedelics company announces its work in securing patents for the intellectual property represented by the product they developed.

Consider: In April, MindMed (NEO: MMED) (OTCQB: MMEDF) (FRA: BGHM), working with the University Hospital Basel’s Laboratory, in Basel, Switzerland in a deal to support clinical trials and secure exclusive patent rights, discovered and filed a patent in the U.S. preserving all worldwide rights for a neutralizer technology that can shorten or even stop the hallucinogenic effects of LSD in a therapy session.

MindMed‘s product is seen as a game-changer in the industry because it extends this sort of therapy to a wider mainstream patient base. The company followed up with a second related patent in June.

Other companies either seeking or being granted patents include psychedelics drug maker CaamTech, doing work on the “entourage effect” of mushrooms, which has built a “comprehensive patent portfolio”; and Revive Therapeutics (CSE: RVV) (OTCPK: RVVTF) (FRA: 31R), which recently bought Psilocin Pharma Corp. for $2.75 million, and has also partnered with the University of Wisconsin to advance its research and development on “an intellectual property portfolio of Psilocybin-based formulations,” according to a press release. 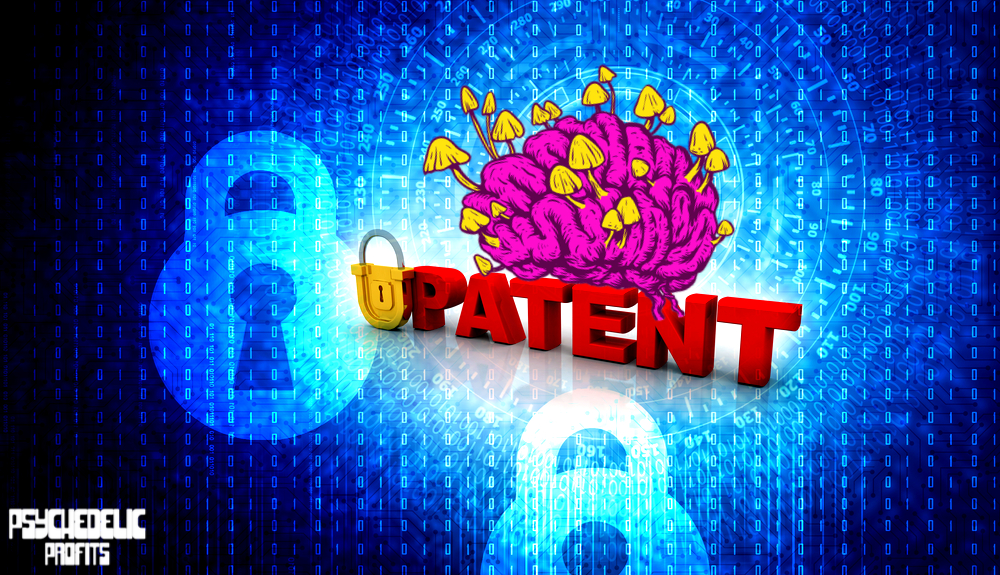 But as patent applications and patent awards continue on what some businesses consider a more and more valuable prize in the fast-growing industry, a battleground has been developing over who is getting them and why.

Take, for example, the issue with Compass Pathways, London-based mental health care company, and Kohn and Associates, a U.S. law firm. Compass had received breakthrough therapy designation from the FDA for treatments of Psilocybin, which would expedite approval by the FDA, representing a clear lead in psychedelics product development.

On Dec. 31, 2019, Compass was granted U.S. Patent No. 10,519,175 “Preparations of Psilocybin, Different Polymorphic Forms, Intermediates, Formulations and Their Use” for large scale Psilocybin production and the method for the manufacture of Psilocybin and intermediates.

Some industry insiders believed the Compass patent was too broad in its scope about its new manufacturing method for synthesizing Psilocybin, and that Compass was attempting to block other companies from getting its own Psilocybin-related patents.

But Compass, in a website post, said it was just about building its business. “Without intellectual property, there would be little incentive to take the risk to fund the research and development of new products, given the large number of drug candidates that fail during the development process. Patents drive innovation and bring new therapies to patients.”

Compass claimed that its patent protection “does not cover naturally occurring mushrooms, it would not prevent others from creating different solutions for their own psilocybin synthesis, nor would it restrict others researching in this field.”

Law firm Kohn and Associates petitioned the USPTO appeal board to have that patent reviewed on February 21, 2020.

But Compass grew suspicious about Kohn and Associates, telling the appeal board in a court filing on May 26 that Kohn is not nor should be considered the sole petitioner—that it did not “fund and control the filing of the petition,” and that it “has undertaken active efforts to conceal and obscure the true identity of the individuals and entities who engaged (and presumably paid and controlled) the Kohn Law Firm’s filing of the petition.”

Compass attorneys claimed that when asked about other entities involved in the petition who presumably paid for it, Kohn quickly made up a Delaware corporate entity, which is an after-the-petition filing fact that violated the rules of the petition process. Because of that activity, Compass says, the Kohn patent review was invalid. (That case is still in process.)

Then there is the lingering suspicion about the motives and leadership of Compass itself, a business that was originally created in 2015 as a non-profit organization (the “Center of Mental Health Pathways and Support for Self-Directed Care”) that transitioned into a for-profit in June 2016.

This sort of who-owns-what-and-why squabbling in a rapidly growing industry is very worrisome for an industry that hopes to continue having open discussions about psychedelics, and share research among everyone to advance the important work of treating mental health, as outlined in a statement issued on December 2017 signed by dozens of scholars, researchers, practitioners, research organizations, and psychedelic societies.

Another worrisome fact was when the word “Psilocybin” was trademarked in January 2020 by the California-based Psilocybin chocolate maker Psilocybin.

At a recent PsyTech webinar, Robert Laurie, a lawyer and founder of Ad Lucem Law Corporation in Vancouver, said that Compass built a patent portfolio in hopes of controlling access and movement and controls around it, which may or may not work, he said.

All psychedelic companies should “take a page” from how other companies operate, he said, using the example of Dyson Technology, which has taken out multiple patents on its vacuum cleaner components as a hedge against Hoover using their technology. “You may come up with new and novel products, and prevent your neighbor or another company or someone acting in another jurisdiction that doesn’t recognize intellectual property from taking your idea and running with it,” Laurie said.

That is why we need to look at better ways of doing this. Because if you are going to donate a significant amount of money to make a psychedelic investment, would it make more sense to put that million dollars into something facilitated by (non-profits) MAPS (Multidisciplinary Association for Psychedelic Studies) or Heffter Institute? Why?

Because these are the folks who already know what clinical trials have been done, and the market demands, and have relationships with regulators and the main stakeholders.

“There’s a lot of opportunity here, but what is your intention? Is it to make the profit? Or is it to create something that is sustainable and that works a long time with the greatest public safety and public health benefit,” Laurie said. “We have the potential to all be winners if we do this right.”