The world is slowly creeping towards a future where individuals suffering from mental health issues can turn to psychedelic medicine for treatment. Over the last few years, there have been numerous advancements in the space, including positive human trials showing that drugs like psilocybin, MDMA and ketamine are effective in treating a host of mental health disorders.

Activists are using these studies to push for an overhaul of the laws governing psychedelics. Laws outlawing psychedelic drugs have been overturned in cities such as Denver, Oakland and Washington, D.C. Most significantly, Oregon became the first state to decriminalize psilocybin and legalize it for medical purposes.

As this emerging industry matures, there will be a significant need for data showing how effective various psychedelic drugs treat specific disorders. One company has developed a software platform that will assist patients and doctors in keeping track of progress made during psychedelic treatments.

Founded in 2020 by retired NHL veteran Daniel Carcillo, Wesana Health (CSE: WESA) (OTCQB: WSNAF) is a relatively new player in the psychedelic medicine industry. The company describes itself as an integrated life sciences company and states its mission as:

“We’re on a mission to revolutionize the treatment of neurological health and performance through advanced technology, personalized treatment and psychedelic therapies.”

Wesana Health will focus on four primary disorders for their treatments: traumatic brain injuries (TBI), migraines, anxiety and depression. These are some of the most common mental health issues globally and thus prevent a large addressable market. To address this market, the company has developed a proprietary software platform for monitoring the efficacy of various drugs on different disorders.

The company will use this platform at its growing network of medical clinics, where doctors who specialize in brain disorders and psychedelics will use it in combination with in-house developed drug regimens to treat mental health patients. This setup will allow the company to collect vast amounts of data and apply that data to future treatment programs.

This data will be crucial to Wesana’s long-term success; they know that identifying and rigorously testing the proper drugs and dosages will be essential to developing a standardized drug that regulators approve. The software platform allows inputs from all parties involved in the treatment process: the patient, therapist, the clinic itself and the researcher behind the drug used for treatment.

With so many inputs from different users, the amount of data that the platform can aggregate is quite large. This should give them a head-start in the race to develop psychedelic medicines.

In addition, Wesana Health announced last month that it was added to the AdvisorShares Psychedelics ETF (NYSE Arca: PSIL).

“We are incredibly pleased to have been selected as a core constituent in the new AdvisorShares Psychedelics ETF. Inclusion in this ETF is another validation in the evolution of Wesana as a publicly-traded company, and the impact Wesana’s core initiatives have had on the psychedelics sector. By strengthening our shareholder base and improving our visibility in the global investment community, we are excited for the next steps in bringing Wesana’s unique approach to neurological health and wellness to patients across the country.” 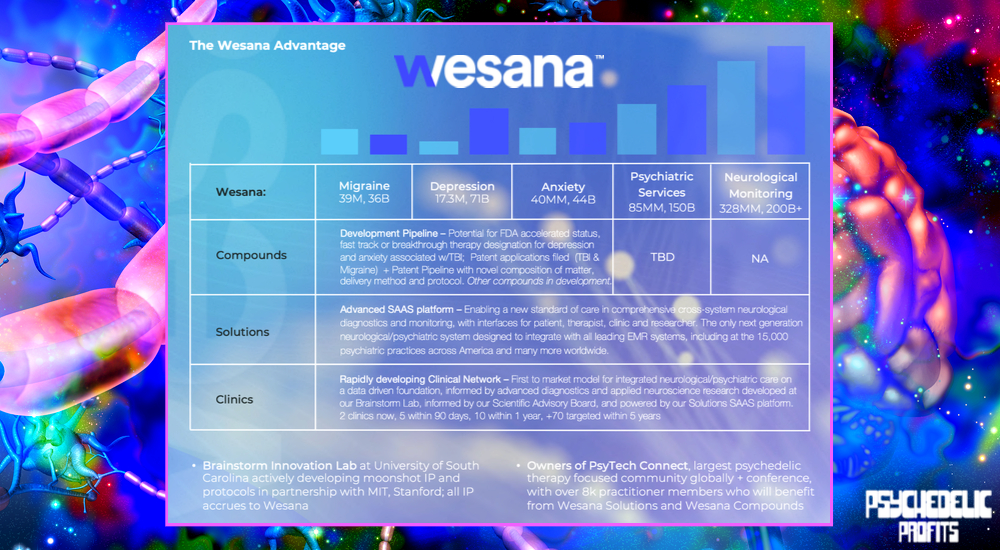 Daniel Carcillo – Founder & CEO: Daniel is an entrepreneur and former professional hockey player. During his 9-year career in the National Hockey League (NHL), he became intimately familiar with the tolls that brain disorders can have on one’s life. Daniel witnessed firsthand numerous traumatic brain injuries via hard hits on the ice. After retiring from the NHL, Daniel founded the charity Chapter 5 Foundation, which aims to help former players who struggle to adapt to life post-hockey. Daniel’s familiarity with the needs of TBI patients and his track record of serving those struggling with their mental health will serve Wesana Health well in the years to come.

Dawn McCollough – COO: It is Dawn’s nearly three-decade-long career in the biopharmaceutical industry that will serve as the backbone of Wesana Health’s operations. Dawn has developed clinical operations for some of the biggest names in the industry, including Biogen (NYSE: BIIB) and Novartis (NYSE: NVS) (SWX: NOVN). This experience will prove crucial as Wesana Health expands its network of clinics and develops more advanced treatments.

Chad Bronstein – Executive Chairman: Chad brings the requisite business experience to the team. Chad has a long history of product development, capital raising and asset acquisitions. Chad is also the founder and CEO of Fyllo, a cloud-based marketing company. Wesana Health will need to raise a great deal of money to achieve its ambitious goals, so Mr. Bronstein’s experienced guiding hand should prove vital to their ongoing success.

There is a brand new field of medicine evolving before our eyes. What was previously seen as taboo and heavily criminalized are now at the cutting edge of mental health. The opportunity to enter the space and bring life-changing medications to millions of people is immense. Wesana Health Holdings is bringing superior data analytics to what is shaping up to be a rainbow-tinted gold rush.