Green Thumb vs MedMen: Which Stock Should Investors Buy or Short? - The Cannabis Investor

Green Thumb vs MedMen: Which Stock Should Investors Buy or Short?

Investors have been in an abusive relationship with North American cannabis stocks for most of 2019. Whether it be major Canadian cannabis companies releasing disappointing earnings, a nationwide fear of vaping products or a tightening of the capital markets, the onslaught of negative news and sentiment has been a near-constant throughout the year. The result has been stock prices plummeting to multi-year lows. Below is a 3-year snapshot of the United States Marijuana Index, which tracks the stock performance of cannabis companies in the U.S. The index has not seen these lows since late 2017. 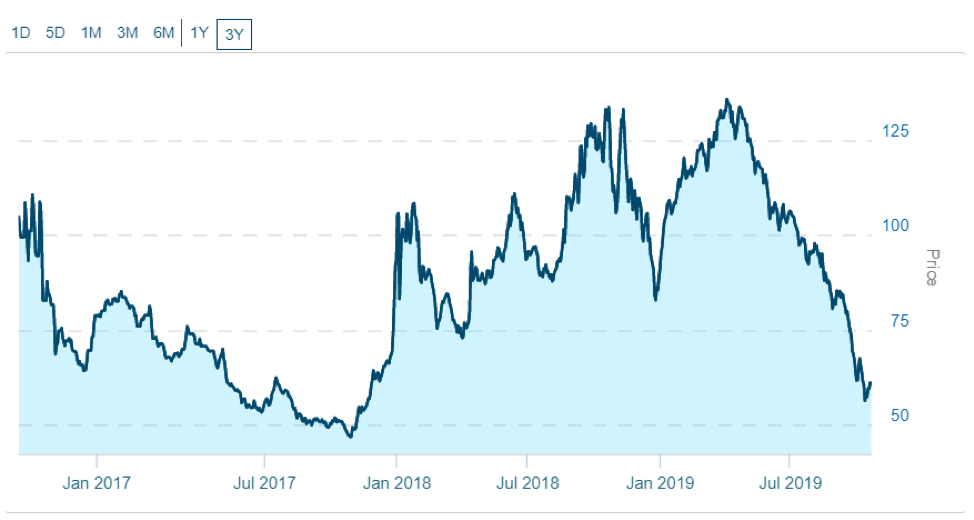 Investors that have chosen to weather the storm are in desperate need of a catalyst to spark a rally. The most likely source for such a spark would be the U.S. Senate passing the Secure and Fair Enforcement (SAFE) Banking in Cannabis Act. The bill, while nowhere close to a sure thing, has the support of counts banks and state attorneys general; the bill passed the House of Representatives with 75% of the vote. Investors wishing to capitalize on a rally need to decide which multi-state operators (MSO) are best positioned to provide growth.

Unlike most U.S. multi-state operators, MedMen (CSE: MMEN) (OTCQX: MMNFF) is not seeking to become a vertically-integrated cannabis producer/retailer. Instead, the self-described “most recognized cannabis retailer in the U.S.” is forgoing cannabis cultivation and focusing their efforts on building the leading cannabis retail chain in America, while also developing private label brands to sell in-house. The company is currently operating 29 retail stores in 9 states, with licenses for a total of 70 stores. 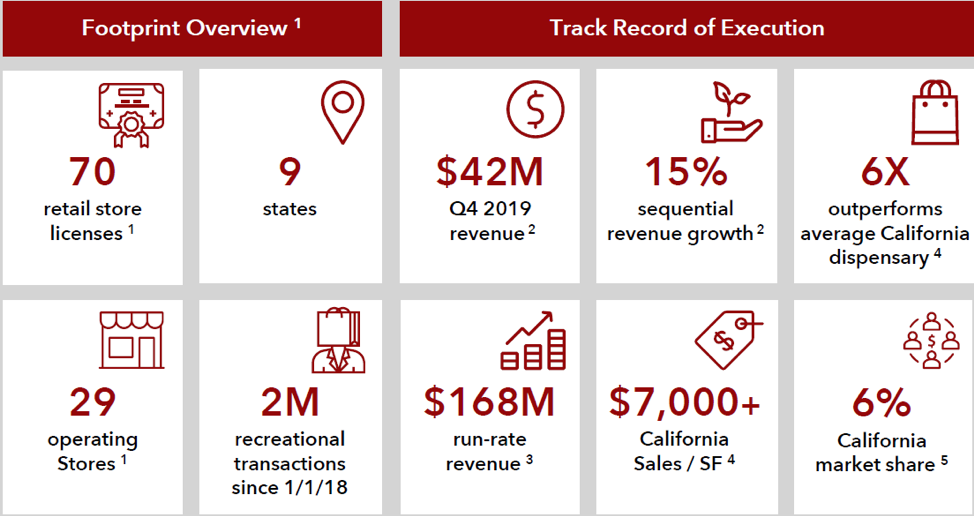 The company believes that cannabis consumption will resemble health food consumption, where consumers rely on the brand of the retailer rather than the brand of the product itself, a la Whole Foods. With their open layout and simple, customer-friendly displays, the company’s stores have been described by some as resembling the highly popular Apple (NASDAQ: AAPL) stores. Like Apple, MedMen is working toward selling their in-house brands, rather than source product from competitors, which should drive higher margins.

The company made headlines recently when its blockbuster deal to acquire PharmaCann, LLC, one of the largest private cannabis companies in the country, fell through. The breakup caught investors by surprise since the companies announced just last month that they had complied with a Department of Justice antitrust probe and were looking to close the deal by the end of the year. Both companies have stated that the breakup was mutual, with both looking to strengthen their current operations rather than spread themselves too thin. As consideration for calling off the merger, PharmaCann has agreed to transfer to Medmen ownership of a production facility, a retail location and two cannabis licenses, one for a retail location and one for a production facility.

A vertically integrated cannabis producer and retailer, Green Thumb (CSE: GTII) (OTCQX: GTBIF) resembles other MSO’s in terms of strategy. The company’s goal is to have production, manufacturing and retail hubs in high-value locales across the country. Much like MedMen, the company wants to stock its dispensaries with as much in-house product as possible, thereby driving higher margins and building brand awareness. The company is currently operating 32 stores across 12 states. 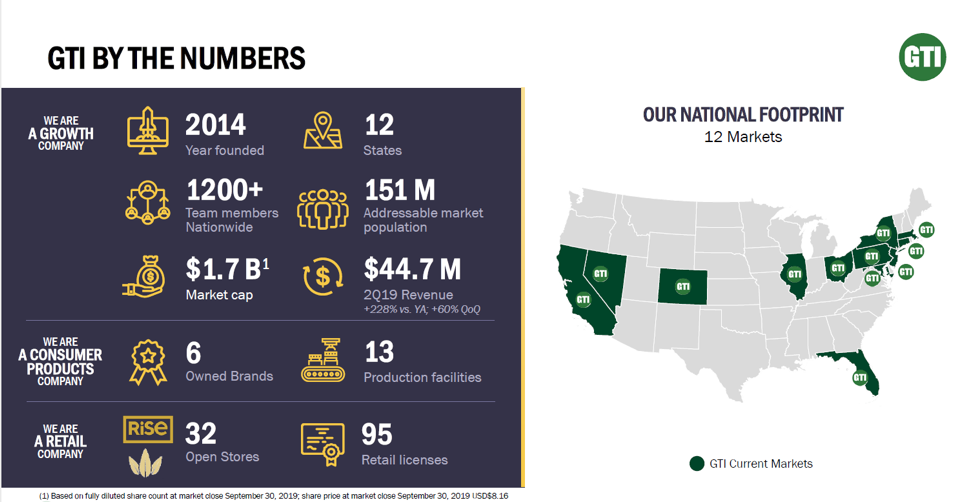 Unlike MedMen, Green Thumb considers cannabis production an integral part of their business plan. Not content to simply buy cannabis wholesale to create its products, the company believes that in-house cannabis production is another way that they can increase margins. They’ve invested significant capital in building out their cultivation and manufacturing facilities, which now total 13 across 12 states.

Both MedMen and Green Thumb are in heavy growth mode. Expanding as fast as they are, especially in a highly regulated industry, tends to lead to losses in the short-term. In the long term, successful growth companies can raise revenues at a faster pace than their associated costs. Green Thumb seems to have a better handle on their costs, with operating margins far superior to MedMen, even though they are growing much faster. 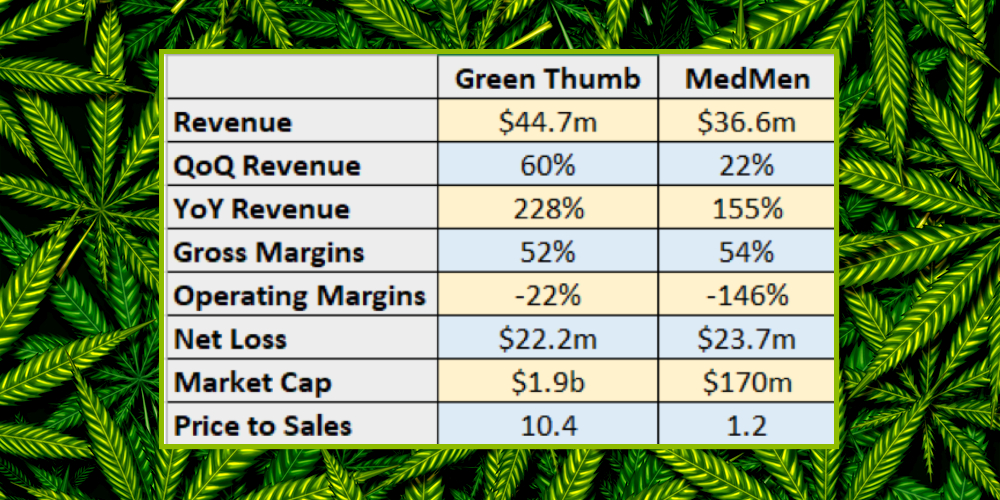 Investors seem to view Green Thumb as a better ran company with more opportunities for growth. With a price-to-sales of 10.4, Green Thumb carries a significantly higher valuation than MedMen, which got hit harder than most companies in the recent downturn; MedMen’s 1.2 price-to-sales is among the lowest in the industry.

There is a rally coming in the cannabis industry, especially in the U.S. Investors need to find quality companies that can become industry leaders, preferably at an attractive valuation. Both Green Thumb and MedMen have extensive, multi-state operations, but Green Thumb seems to be managing their growth much better than MedMen.

Ultimately, it would behoove investors to hold several U.S. companies, as the future of the industry is still very much undecided.  Both MedMen and Green Thumb should be considered for spots in a basket of stocks.