Adult-Use Cannabis Sales in Illinois Top $39 Million in First Month, 4 MSOs Are Staking a Claim in the New Lucrative Market - The Cannabis Investor

Adult-Use Cannabis Sales in Illinois Top $39 Million in First Month, 4 MSOs Are Staking a Claim in the New Lucrative Market

Demand for adult-use cannabis in Illinois was through the roof as the newly legal state racked up an impressive $39.2 million in January sales, according to the Illinois Department of Financial and Professional Regulation. In total, this figure worked out to approximately 972,000 individual products sold throughout the state. Due to Illinois’ geographic location, out-of-state residents flocked to dispensaries throughout the state spending more than $8.6 million in January.

On a per-capita basis, Illinois had the second-best first-month sales of any state in U.S. legalization history. According to the cannabis research firm New Frontier Data, the state’s month one sales worked out to $3.07 per Illinois resident. The only state that saw better numbers in its first month of adult-use sales was Nevada with a per-capita total of $8.88 per resident in July of 2017. New Frontier noted that Nevada likely received a large boost from its tourism industry, most notably, Las Vegas.

Illinois Governor J.B. Pritzker was hoping for a strong start to his state’s recreational cannabis market but even he didn’t expect sales of nearly $40 million.

“I didn’t have a $40 million benchmark,” said Pritzker. “The strong start is what we hoped for [but the sales figure] is surprising to us.”

“Illinois has a really strong advantage, being in the middle of prohibition territory,” said Bethany Gomez of cannabis research Brightfield Group.

The state known as the Land of Lincoln experienced sales of $3.2 million on its very first day of legal sales making it clear that demand would likely outpace supply in the early going. By the end of the first week, Illinois had already sold $10 million worth of cannabis products.

Demand was strong in January with nearly 1 million individual products sold, eventually leading to shortages across the state. Cannabis flower, in particular, sold out the quickest. It is expected that the current supply issue could last for months and in anticipation, some shops have enacted a per customer buying limit to ration product. Other dispensaries have limited adult-use sales to only 2-3 days per week or stoped recreational cannabis sales altogether for the time being.

If the current statewide shortages are any indication, the Illinois cannabis market will be a force to reckon with once supply catches up as the market matures. Current estimates predict that cannabis sales in Illinois could grow to around $2 billion to $4 billion annually.

“There’s a lot more consumer demand that’s not being met just because of those supply shortages. Once supply and demand issues can start to be worked out, we can see much greater growth,” stated Gomez.

According to the Illinois Department of Revenue, tax collections on legal cannabis sales is projected to increase from $34 million this year to $375.5 million in 2024. 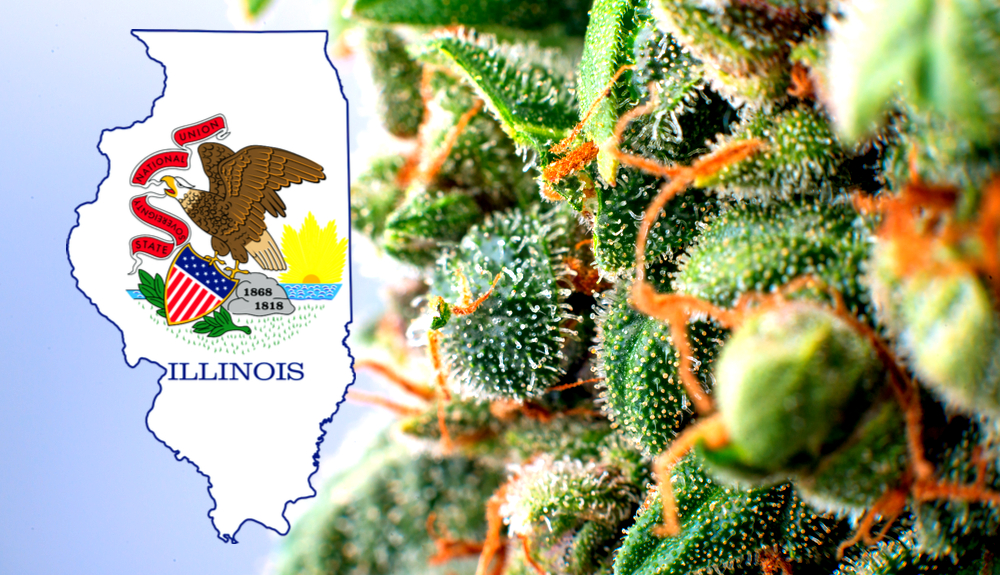 The state of Illinois has also pledged to reinvestment roughly a quarter of its tax revenue back into the communities most impacted by the failed war on drugs. Illinois has made it a priority to right the wrongs of cannabis prohibition through the promotion of social equity in the state’s cannabis industry. Illinois will look to implement restorative justice provisions.

“The successful launch of the Illinois’ legal cannabis industry represents new opportunities for entrepreneurs and the very communities that have historically been harmed by the failed war on drugs,” stated Illinois’s cannabis czar Toi Hutchinson. “The administration is dedicated to providing multiple points of entry into this new industry, from dispensary owners to transporters, to ensure legalization is equitable and accessible for all Illinoisans.”

According to provisions in the state’s new legislation, over the coming months, Illinois state agencies will continue to accept applications for craft growers, cannabis infusers and transporter licenses positions with social equity applicants receiving additional points on their applications. They will also be eligible for special grants and loans in addition to other incentive programs.

4 Companies Poised to Thrive in Illinois

Two Chicago based multi-state operators (MSOs) have staked out an early claim on the lucrative Illinois adult-use cannabis market. Green Thumb Industries (CSE: GTII) (OTCQX: GTBIF) (FRA: R9U2) and Cresco Labs (CSE: CL) (OTCQX: CRLBF) (FRA: 6CQ) reported having a successful opening day serving thousands of customers following the commencement of adult-use sales in Illinois on New Year’s Day. Both companies also noted the enthusiasm shown by its customers who waited in long lines or even camped out overnight for the chance to legally buy cannabis in Illinois for the first time in over 200 years.

The first day of adult-use sales also marked the grand opening of Green Thumb’s 40th dispensary nationwide and its first recreational cannabis only store in the state of Illinois called Rise Joliet.

“January 1 was a historic day in Illinois as adult-use cannabis sales launched in Illinois, and we’re honoured that Rise Joliet is part of that history. Our stores that sell to all adults 21+ – Rise Mundelein, Rise Canton, Rise Joliet and 3C Joliet – have served thousands of people so far and the energy and enthusiasm from new customers has been overwhelming.”

Day one of recreational cannabis in Illinois was equally as impressive for Cresco Labs with the company disclosing it served 3,145 customers and sold a total of 9,258 at its 5 Sunnyside locations throughout the state. The average ticket price on day one purchases was $135.

“We’re ecstatic for our Sunnyside* dispensaries to begin serving recreational customers on such a historic day that launches a new era of cannabis and the development of an industry that will bring greater justice, social equity and business ownership opportunities throughout the state. With 13 million residents and 100 million annual tourists, Illinois is predicted to be one of the largest recreational cannabis markets in the United States. Cresco is uniquely positioned in the supply-constrained state, with permission for the largest cultivation footprint at 630,000 square feet and ten retail dispensaries, including three in high traffic areas in the city of Chicago,” said Cresco Co-Founder and CEO Charlie Bachtell.

The largest MSO of them all, Curaleaf Holdings (CSE: CURA) (OTCQX: CURLF) has plans to enter the Illinois market through its pending acquisition of Chicago based Grassroots. Curaleaf expects to close the deal sometime in the second quarter of 2020 giving the company a slice of Illinois market.

Curaleaf’s executive chairman Boris Jordan commented on the opportunity saying Illinois “had the most successful roll out in the industry.”

A potentially even more lucrative section of the market not many people are talking about is the massive opportunity in the CBD hemp space. A private company currently with plans to go public in 2020 by the name of Red White & Bloom (RWB) is doing some fantastic work with high CBD hemp flower at its 3.6 million sq ft indoor CBD cultivation facility.

The strain Red White & Bloom is using to grow its high CBD hemp flower was given the fitting name “TRUMP.” The Trump flower has standardized CBD levels of approximately 15% and will qualify as hemp since its THC levels are under 0.3%, allowing it to be sold legally across the nation. In the future, RWB plans to roll out its CBD flower products throughout the United States and will also target convenience stores and gas stations.

At the time of the Midas Letter interview, Rogers stated that RWB had already harvested 60 tons of CBD flower which it plans to use to create high margin branded cannabis products. RWB anticipates that its Illinois facility will generate sales of approximately $150 million – $200 million per year at full power.

Investors that are interested in receiving updates regarding Red White & Bloom’s inaugural trading date should sign up for the TCI Email Newsletter below. Once we get the word, you’ll be the first to know.