The California cannabis industry is the largest in the world, but there is no clear-cut leader in The Golden State. State-wide distribution, from San Diego in the south to the pot mecca of Humboldt in the north, is expensive and difficult to establish. Most producers in the state are opting to instead focus on establishing their brands in a few select regions of the state. One new player in the industry has partnered with a famous cannabis user, activist and influencer to bring a celebrity-branded THC & CBD tincture products to market.

Hollister Biosciences is on the Rise

Established in 2017, Hollister Biosciences (CSE: HOLL) (FRA: HOB) is a cannabis and hemp producer located in Hollister, California, a small farming town just south of the San Francisco Bay Area. The company intends to use vertical integration, statewide distribution and leading brands in high-margin segments of the industry to become a dominant player in The Golden State. Management has decided to focus on developing leading cannabis and hemp brands, as opposed to focusing on retail stores. This strategy should allow them to run a leaner and tighter company that’s not bogged down by the capital requirements of opening their own dispensaries.

Hollister has several popular brands under its umbrella. The company’s primary dried flower brand is Hashbone, which offers a line of hash-infused pre-rolls. While pre-rolls are the highest margin dried flower product, adding a cannabis concentrate like hash increases both the potency and the profitability of a traditional pre-roll. To supply the demand created by health-conscious cannabis users, Hollister developed the MightyMeds brand. MightyMeds, based out of San Diego, is Hollister’s line of high quality, disposable vape cartridges that is targeted primarily at users of medical cannabis.

To capitalize on the rapidly growing CBD trend, Hollister developed the Rebel Hemp Company brand. Rebel hemp will utilize CBD in a variety of products intended for nationwide distribution. Management has plans for CBD soft gels, tinctures, edibles, vapes, pet products and more. First up, though, was the development of a beverage made with hemp. After testing a multitude of recipes, the company eventually developed Rebel Tea. Intended for national distribution, Rebel Tea is brewed with organic hemp and contains 15 milligrams of CBD per serving. The only other ingredients are cane sugar and lemon, so consumers won’t have to worry about an ingredient list filled with chemicals that they do not recognize.

Management also intends to roll out a line of edibles containing a proprietary technology, called NanoPure, which will aid in controlling the dose of cannabinoids that consumers receive. NanoPure provides a quicker onset of effects, a more even-keeled high and a more rapid offset, which should alleviate much of the trepidation that new cannabis users have with edibles. In addition to their products, management intends to license NanoPure for use by other companies.

To get their products in dispensaries throughout the state of California, Hollister is partnering with Indus Distribution (CSE: INDS), one of the largest cannabis distributors in the state. This partnership centers around WAYV, a cloud-based logistics platform that manages inventory levels at dispensaries and automatically requisitions new products when needed. The platform also assists with transportation and payment processing. 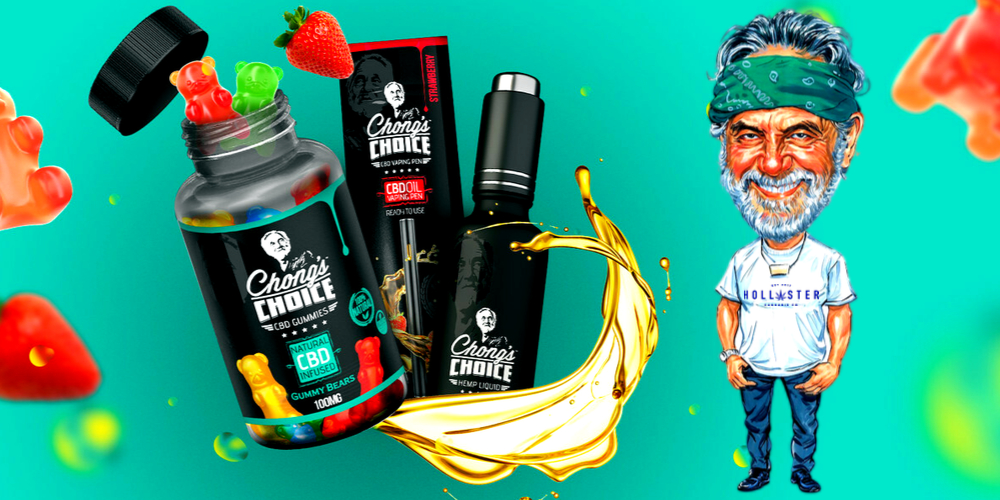 Stoner culture began to coalesce during the heyday of the hippies in the 1960’s. Central tenets of the hippies’ beliefs were free to love, a rejection of the nuclear family and, of course, the use of cannabis and other mind-altering Psychedelics. Seeking to capitalize on the hippie and counterculture movements, Richard “Cheech” Marin and Tommy Chong formed the comedy duo Cheech & Chong in the early 1970s.

The award-winning pair became hugely popular by lampooning both the hippie lifestyle and the over-the-top reactions from more conservative corners of society. Perhaps their most widely known works are their feature films, where the two portray hapless stoners who nevertheless manage to outwit the police, corporate bigwigs and rival drug dealers. So successful were these feature films which made Cheech & Chong synonymous with cannabis culture all over the globe. After two decades of performing together, the pair split up and went their separate ways. Following a few years of trying to write for and act in television sitcoms, Tommy Chong decided to become a cannabis entrepreneur and activist.

Chong made headlines in 2012 when he announced that he had been diagnosed with prostate cancer years earlier. During an interview with CNN, the actor stated, “I’ve got prostate cancer, and I’m treating it with hemp oil, with cannabis…so legalization means a lot more to me than just being able to smoke a joint without being arrested…I’m taking it as a medicine.” For years, Chong has served on the advisory board of the National Organization for the Reform of Marijuana Laws, more commonly referred to by its acronym “NORML.” The organization, whose other members include Willie Nelson, David Crosby, Woody Harrelson and Bill Maher, advocates for the end of the federal prohibition of cannabis on medical and humanitarian grounds.

For those that have never seen a Cheech & Chong movie, below is a clip from a famous scene in the 1978 film “Cheech & Chong Up in Smoke.” Enjoy!

A Promising and Lucrative New Partnership

While Tommy Chong gained popularity for portraying a stoner, nowadays he’s much more focused on the medical aspects of cannabis. After the market closed today, it was announced that Hollister Biosciences and Tommy Chong signed a licensing deal allowing Hollister to manufacture and distribute Tommy Chong’s Cannabis™ Full Spectrum Elixer 1:1. The cannabis tincture has an equal ratio of THC to CBD.

“We are honored and excited to be partners with such a legendary and Iconic star as Tommy Chong. Tommy has experienced the medical benefits of cannabis and we are looking forward to working together to launch Tommy Chong’s Cannabis Full Spectrum Elixir into the California Legal Cannabis marketplace,” said Hollister CEO Carl Saling.

Chong is licensing the formula and brand to Hollister, who will manufacture and distribute (via WAYV) the finished product. The two parties anticipate production of around 25,000 units in the first year, with each bottle retailing for $70 allowing Hollister to generate potential revenue of $1,750,000 in the first year. Should the product sell well, expect management to increase production dramatically.

In discussing the new partnership with Hollister, Tommy Chong stated: “I only partner with the best-in-class companies and I am really pleased to have the Hollister Cannabis Co. bring their amazing Tommy Chong’s Cannabis™ Full Spectrum Elixir to the market for me”.

Companies know that consumers have a certain amount of trust in celebrities and influencers. This is why you see famous actors selling everything from car insurance to cheeseburgers. The cannabis industry is unique in that certain celebrities have widely known connections to weed. Hollister’s new partnership is with one of the most famous cannabis-linked celebrities of all time in Tommy Chong and his Tommy Chong’s Cannabis™ tinctures. Tommy Chong’s reputation should go a long way in convincing consumers to go out and purchase the product and the fact that Chong has over 10 million social media followers is an added bonus. If the partnership is as successful as anticipated, Hollister will likely license and produce additional Tommy Chong-branded products in the future.

Before today, HOLL stock had been consolidating sideways after twice closing at a high of $0.20 in December 2019. Today, HOLL exploded higher breaking through its previous high fueled by a 764% increase in trading volume compared to the previous 7-day average.

The Tommy Chong news came out after market close today so HOLL’s bullish price action hasn’t yet factored in this great new licensing deal. Look for HOLL to open strong on Monday and continue to trend higher now that it’s broken out of its trading range. 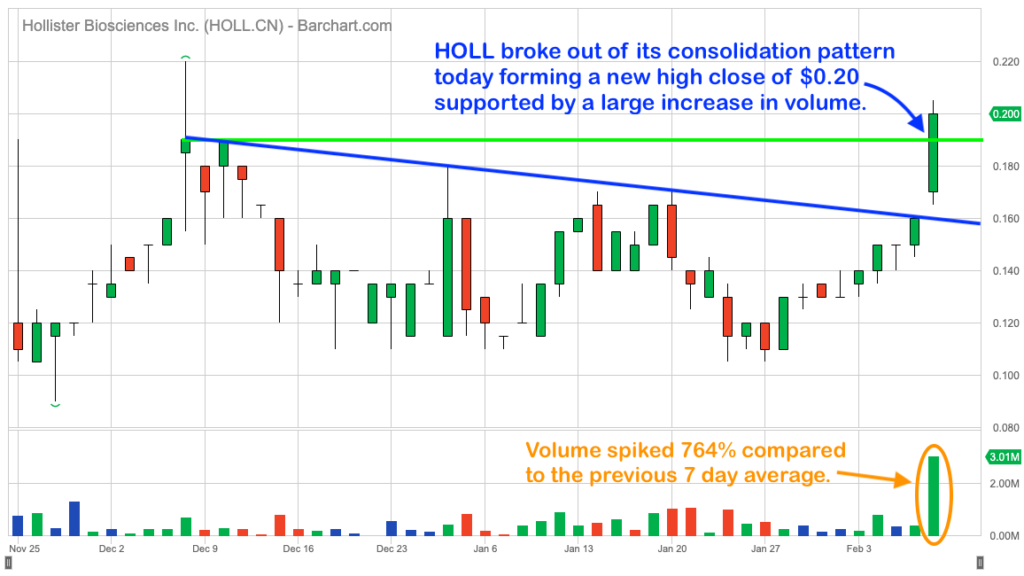