Brad Rogers, one of the most successful executives in cannabis industry history and current CEO of Red White & Bloom (CSE: RWB – IPO Soon) made an appearance on Midas Letter RAW this past Friday. Midas Letter is the top cannabis investing show on YouTube and regularly features interviews with the cannabis industry’s top executives, investors and analysts. You can check out the Midas Letter YouTube page here.

Rogers kicks off the interview with Midas Letter host James West by discussing the excitement surrounding his third major cannabis venture and first in the United States. The RWB CEO highlights a few of the key reasons why the opportunity south of the border is so compelling.

“As we all know, I think there is a lot of commerce in cannabis around the world but the epicentre of the commerce is south of the border and the exciting part for me,” stated Rogers on Midas Letter RAW.

Rogers says the U.S. market is not bound by the same overbearing restrictions on products, marketing, branding, retail or any other part of the cannabis value chain that its neighbours to the north are being held back by.

After founding Mettrum and eventually selling the company for nearly $500 million to Canopy Growth (TSX: WEED) (NYSE: CGC), Rogers became the President of CannTrust (TSX: TRST) (NYSE: CTST) and built the company into one of the top cannabis operators in the world. Rogers left CannTrust long before the company ran into trouble due to its now-infamous Health Canada scandal. Having seen the writing on the wall long before the average investor, Rogers took his skills and headed for the United States where he now sits as the CEO of Red White & Bloom.

To date, RWB has raised over USD $100 million privately and has invested wisely in Michigan and Illinois with plans to expand into other states soon. In Michigan, RWB currently has 12 operating stores with 2 more in the pipeline set to come online shortly. The company also has 3 cultivation facilities that are set to come online in 2020. In Michigan alone, RWB is already generating over $100 million annually and Rogers anticipates the company could generate as much as $250 million – $300 million in 2020. These are huge numbers for a single state.

“This opportunity that we’ve created south of the border, in Michigan specifically right now, is like I’ve never seen before,” added Rogers. 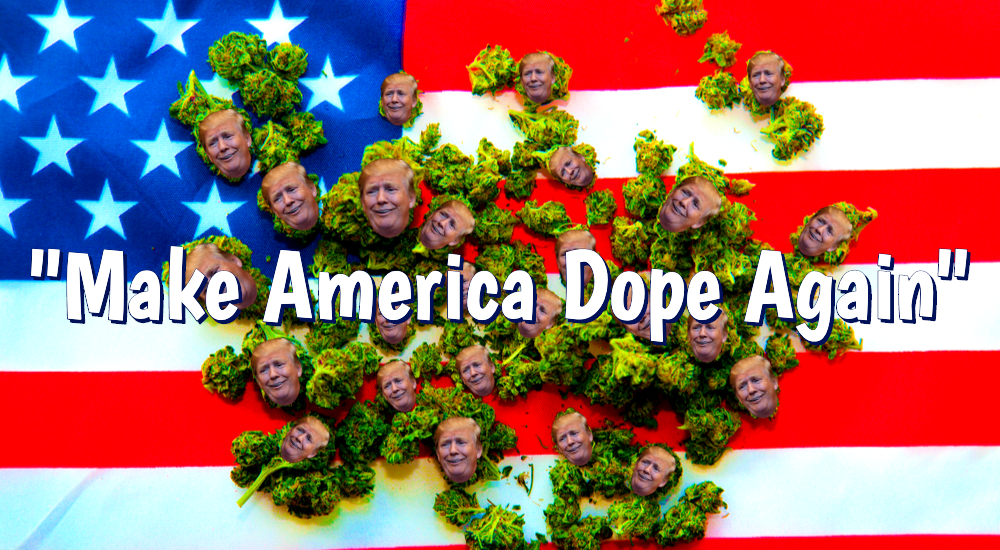 In Illinois, RWB’s massive 3.6 million sq ft indoor CBD cultivation facility is currently producing top of the line CBD flower and the company has already harvested 60 tons which it plans to use to create high margin branded cannabis products. At full power, the Illinois greenhouse facility is expected to pull in another $150 million – $200 million per year in sales.

The strain Red White & Bloom is using to grow this valuable CBD flower has been given the name “TRUMP”, a fitting name since on multiple occasions Rogers has stated that RWB plans to “Make America Dope Again.” The Trump flower has standardized CBD levels of approximately 15% and will qualify as hemp since its THC levels are under 0.3%.

RWB plans to roll its CBD flower products out across the nation and will even target convenience stores and gas stations where consumers will have the opportunity to buy fully legal CBD flower and roll up their own hemp joints regardless if their state has medical or adult-use laws in effect.

Michigan and Illinois have proven to be fantastic medical cannabis markets and both states have approved adult-use legislation with sales officially slated to begin at the start of 2020. In Michigan specifically, RWB’s head start on its competition is proving to be extremely valuable as Rogers explained that all medical license holders in the state will get a two year run on recreational licenses with no new adult-use licenses being issued for two years.

When you consider RWB’s existing infrastructure, this becomes a huge advantage for the company. It is anticipated that the value of the Michigan market will jump from $1 billion to $3 billion once recreational sales commence. This could allow RWB to triple its already impressive sales in the state.

With an increased emphasis on cannabis operators being profitable, investors will be excited to learn that all of RWB’s businesses are profitable and operating in the black. Public market conditions in the cannabis sector have been poor for the majority of 2019 but RWB is in a terrific position and will continue to keep working hard as it gears up to eventually IPO in the near future. As soon as we learn of an official IPO date for RWB we’ll let you know.

Brad Rogers had a lot more to say about RWB, the U.S. opportunity and even the recent vape crisis. Watch the full Midas Letter interview below to hear what else Rogers had to say.