The Test Results Are In: Black Market vs Legal Marijuana Vapes - The Cannabis Investor

The Test Results Are In: Black Market vs Legal Marijuana Vapes

Unless you’ve been living under a rock, then you’ve certainly heard about the serious accusations being directed at the cannabis vaping industry.

According to federal health officials, it has been reported that up to twelve people have died from lung illnesses that are believed to be tied to THC vape pens. Another 805 have been hospitalized with similar issues.

One of the most publicized recent cases involves a young man by the name of Fabian Castillo. Castillo has been suffering from debilitating anxiety and on the advice of his uncle, tuned to THC vaping as a way to alleviate his anxiety. The main issue in Castillo’s case was the fact that his uncle supplied him a bootlegged THC vape from the black market.

Over the next few months, Castillo developed breathing issues and ended up in the hospital where doctors had to place him in a medically induced coma for nine days. Thankfully, Castillo pulled through but he still struggles to breathe deeply today.

The 19-year-old Castillo believes his black market vape didn’t only contained THC but also a mixture of toxic chemicals that did not belong in the vape and were not stated on the label.

You have to understand something. A large percentage of black market cannabis growers and extractors are criminals and don’t give a shit about your health. If their cannabis crop runs into issues with bugs or other pests you can almost guarantee they will do whatever it takes not to take a loss on the operation. If that means using deadly chemicals or pesticides to make sure that doesn’t happen, then that’s what they’ll do. They aren’t the ones smoking or ingesting it. All these criminals care about is putting money in their pocket.

PLEASE THINK ABOUT THIS THE NEXT TIME YOU CONSIDER CONSUMING A BLACK MARKET CANNABIS PRODUCT. YOU HAVE NO CLUE WHAT’S ACTUALLY IN IT. YOU COULD BE SMOKING POISON. 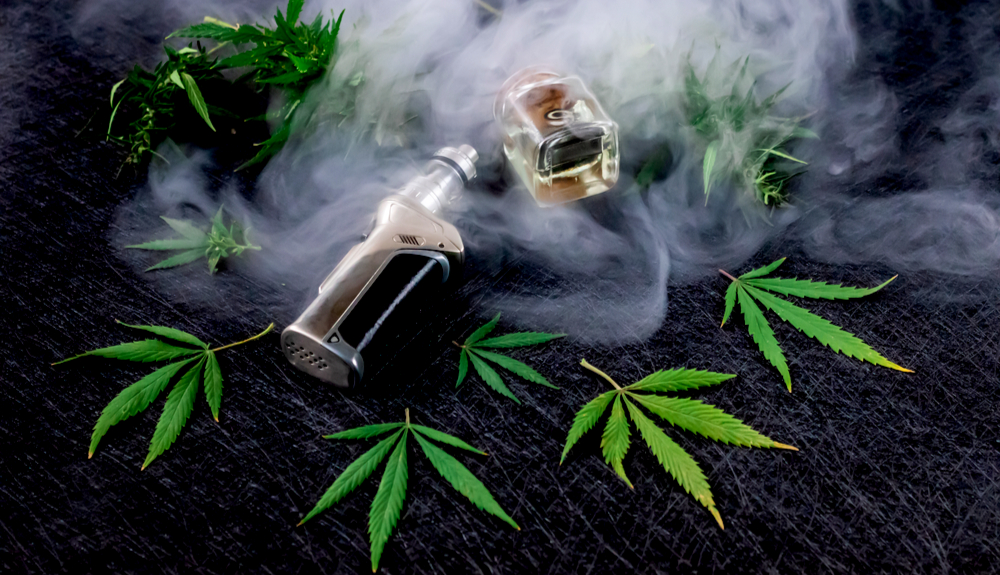 Due to the massive media frenzy surrounding the issue of “deadly vapes”, NBC News took it upon themselves to get to the bottom of the issue once and for all. Was it all cannabis vapes causing these issues? Or was it simply the vapes from the illegal black market that were damaging the health of unsuspecting consumers?

NBC News commissioned California based CannaSafe, one of the United States’ top cannabis testing facilities and had them test 18 different THC vape cartridges. Some cartridges from the legal market and some from the black market. What they uncovered was pretty shocking.

CannaSafe first tested three vapes purchases legally from dispensaries in California. The tests determined that the legal vape cartridges contained NO pesticides, heavy metals or leftover solvents such as Vitamin E. Vitamin E acetate is a solvent that some black market producers will use to cut their cannabis oil and health officials believe it could be responsible for the current health crisis. 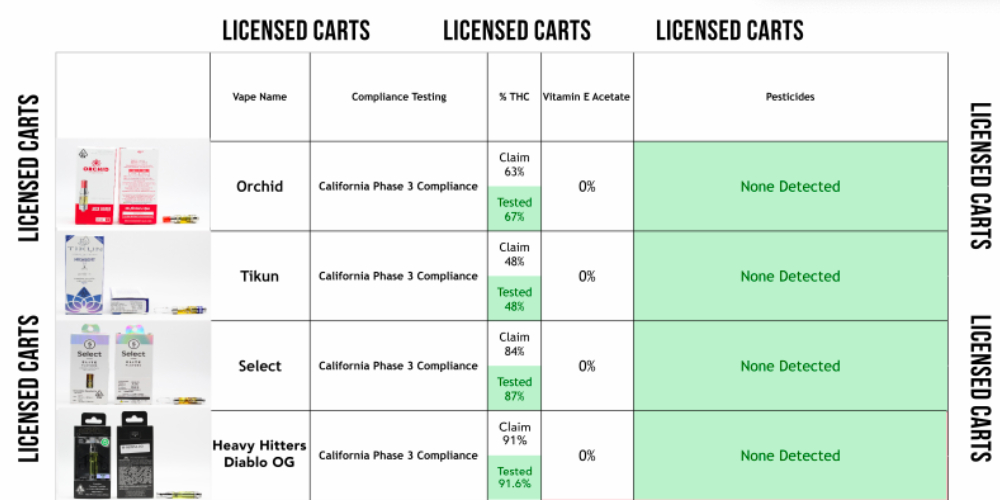 The other 15 samples tested were supplied from the illegal black market. 13 out of the 15 tested all contained the potentially deadly ingredient Vitamin E. Vitamin E is not something that should ever be inhaled into the lungs as it has been known to cause serious damage.

10 of the 15 black market vapes were tested for pesticides with all 10 testing positive for myclobutanil. Myclobutanil is a fungicide known to be very toxic on the lungs and when burned can convert into hydrogen cyanide.

Next time you go to take a puff from your black market vape, remember you could be inhaling poisonous cyanide. Don’t count on these corrupt manufacturers to put cyanide on the label either.

“You certainly don’t want to be smoking cyanide. I don’t think anyone would buy a cart that was labelled hydrogen cyanide on it,” stated CannaSafe VP of Operations Antonio Frazier.

The test results from other cases of vaping related illnesses turned up similar results which included Vitamin E. 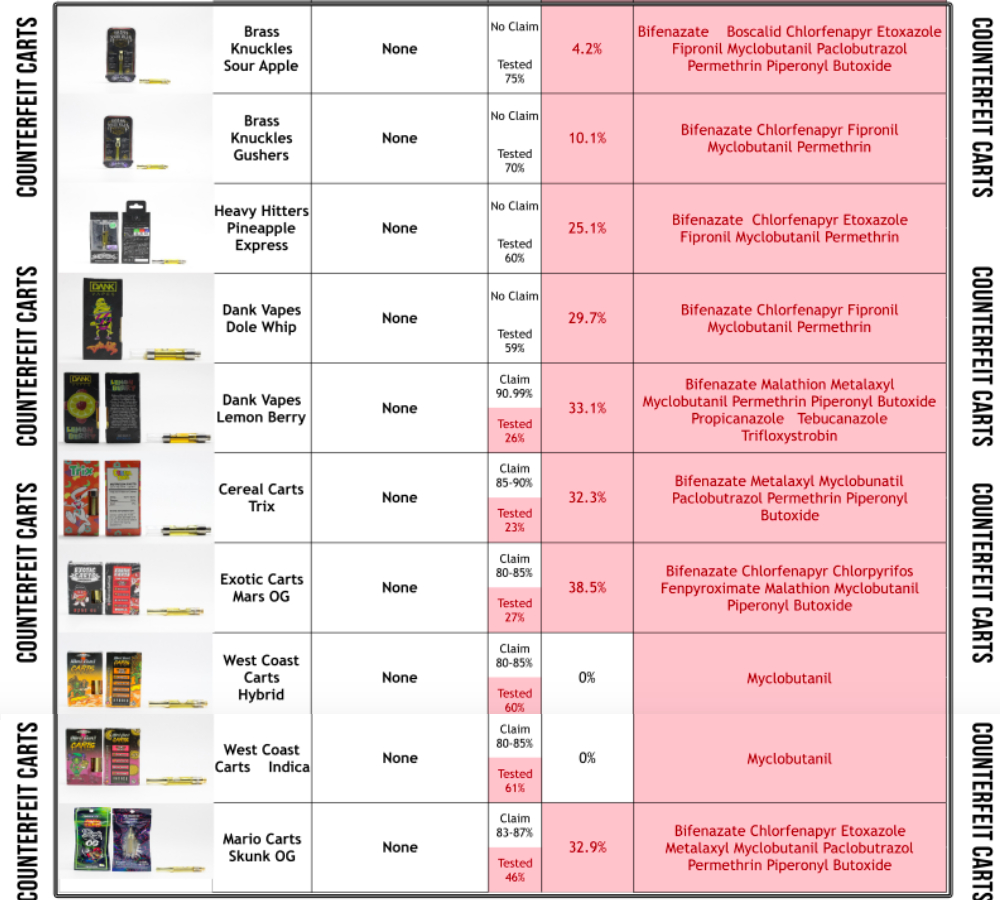 The U.S. Food and Drug Administration is taking this issue very seriously and Acting Commissioner Ned Sharpless issued the following statement recently to the House Energy and Commerce subcommittee:

“FDA is not pursuing any actions associated with personal use of any vaping products, our interest is in the suppliers. But to be clear, if we determine that someone is manufacturing or distributing illicit, adulterated vaping products that caused illness and death for personal profit, we would consider that to be a criminal act.”

If the U.S. government wants to solve this issue they need to eradicate the black market and stop screwing around with cannabis reform. Cannabis prohibition in the U.S. was done for political reasons which had nothing to do with protecting the public.

Cannabis should not be listed as a schedule one drug as it’s health benefits have been overwhelmingly proved over and over again, including by the USA’s own FDA.

If the U.S. wants to stop and prevent issues like the one we are seeing right now with vaping, then I have two words for them, Federal Legalization!

Don’t listen to the fake news saying “throw out all your vapes”. If you’re going to consume cannabis vape products, don’t be a cheapskate, only deal with well-established premium brands. Vaping isn’t the issue here, it’s the toxic chemicals that don’t belong in the products being used to cut corners by certain black market degenerates. Just be smart, your health is worth a few extra dollars.