GATINEAU, Quebec and OAKVILLE, Ontario , May 24, 2019 (GLOBE NEWSWIRE) — HEXO Corp. (TSX: HEXO) (NYSE-A: HEXO) and Newstrike Brands Ltd. (“Newstrike“) (TSX-V: HIP) are pleased to announce that they have completed the previously announced arrangement (the “Arrangement“), pursuant to which HEXO has acquired all of the issued and outstanding common shares of Newstrike (the “Newstrike Shares”) by way of a plan of arrangement under the Business Corporations Act (Ontario).

“Today, our company begins the next phase of its great adventure,” said Sebastien St-Louis, CEO and co-founder of HEXO. “The combination of these two talented teams, both pioneers in the cannabis industry, will accelerate HEXO’s vision of creating the best cannabis technology company. I would like to take this opportunity to thank Jay Wilgar and the entire Newstrike team for the trust they have given HEXO as we continue our journey together,” added St-Louis.

Under the terms of the Arrangement, each former Newstrike shareholder is now entitled to receive 0.06332 of a common share in the capital of HEXO for each Newstrike Share held immediately prior to the Arrangement (the “Consideration“). It is anticipated that the Newstrike Shares will be delisted from the TSX Venture Exchange (“TSXV“) as of the close of trading on or about May 28, 2019.

Holders of Newstrike options have received replacement options under the Arrangement, exercisable for common shares in the capital of HEXO at the same conversion ratio applicable to the Newstrike Shares. All other terms and conditions of the replacement options, including the term of expiry, vesting, conditions to and manner of exercising, are the same as the Newstrike options for which they were exchanged.

Further information about the Arrangement is set forth in the materials prepared by Newstrike in respect of the Meeting which were mailed to Newstrike shareholders and filed under Newstrike’s profile on the System for Electronic Document Analysis and Retrieval (SEDAR) at www.sedar.com. Following the completion of the Arrangement, HEXO continues to comply with all applicable laws in each jurisdiction in which it operates.

Prior to the completion of the Arrangement, Newstrike had outstanding two classes of warrants to purchase common shares of Newstrike listed on the TSXV under the trading symbols HIP.WT and HIP.WT.A, respectively (together the “Listed Newstrike Warrants”).

The Listed Newstrike Warrants will continue trading on the TSXV as Newstrike warrants, under their existing trading symbols, and will remain listed on the TSXV until the earliest to occur of their exercise, expiry or delisting.

An application has been filed with the applicable securities regulators of Newstrike for exemptive relief from certain continuous disclosure and insider reporting requirements. In the event Newstrike is granted such relief, holders of Listed Newstrike Warrants will be directed to reference, and rely on, the public disclosure filings of HEXO.

Immediately prior to the completion of the Arrangement, each of the directors of the boards of directors of Newstrike and its subsidiaries resigned.

HEXO’s and Newstrike’s operations are subject to a variety of laws, regulations and guidelines relating to the marketing, acquisition, manufacture, management, transportation, storage, sale and disposal of cannabis but also including laws and regulations relating to health and safety, the conduct of operations and the protection of the environment. To the knowledge of HEXO’s management, HEXO and Newstrike are and following the completion of the Arrangement continue to be in compliance with all such laws. Changes to such laws, regulations and guidelines due to matters beyond the control of HEXO and Newstrike may cause adverse effects to HEXO’s and Newstrike’s combined operations.

HEXO Corp is an award-winning consumer packaged goods cannabis company that creates and distributes prize-winning products to serve the global cannabis market. Through its hub and spoke business strategy, HEXO Corp is partnering with Fortune 500 companies, bringing its brand value, cannabinoid isolation technology, licensed infrastructure and regulatory expertise to established companies, leveraging their distribution networks and capacity. As one of the largest licensed cannabis companies in Canada, HEXO Corp operates with 1.8 million sq. ft of facilities in Ontario and Quebec and a foothold in Greece to establish a Eurozone processing, production and distribution centre. HEXO serves the Canadian adult-use and medical markets.

Newstrike is the parent company of Up Cannabis Inc., a licensed producer of cannabis that is licensed to both cultivate and sell cannabis in all acceptable forms. Newstrike, through Up Cannabis and together with select strategic partners, including Canada’s iconic musicians The Tragically Hip, is developing a diverse network of high quality cannabis brands. 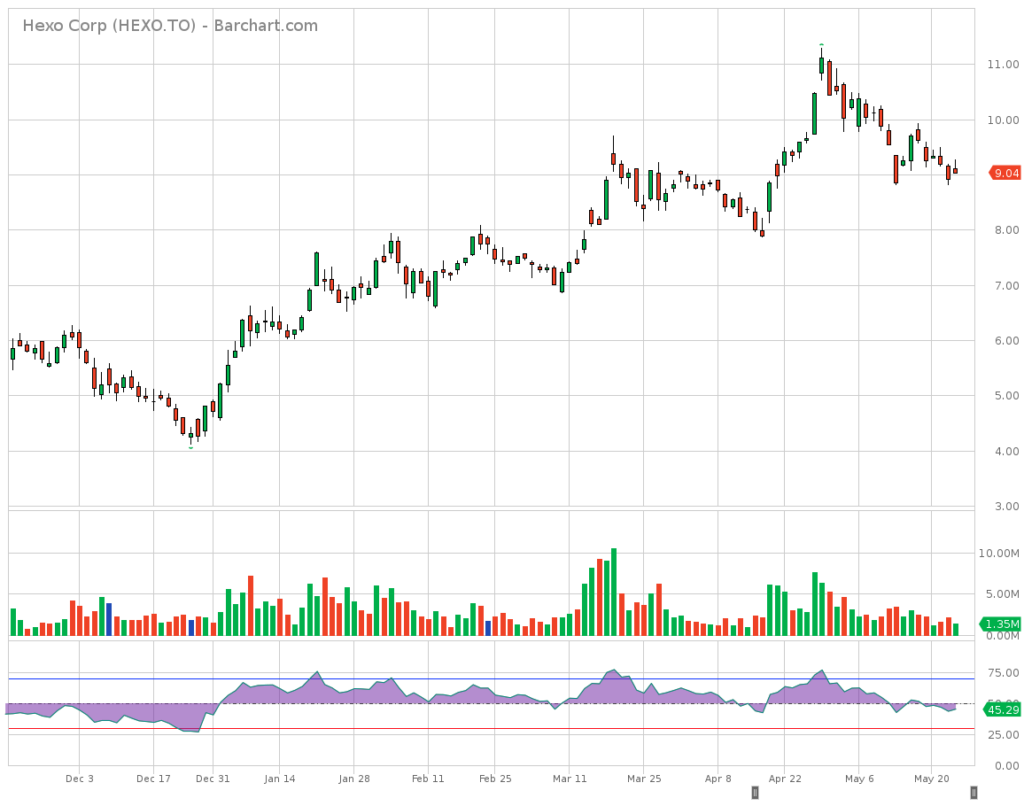 Technical Analysis for HEXO by TradingView