Despite all the recent speculation that cannabis legalization is imminent in the U.S., the substance — and its extracts, including cannabidiol (CBD) oil derived from cannabis — is still considered a controlled substance under U.S. federal law.

The woman, an undergraduate student at the University of Guelph, was recently attempting to cross into the U.S. at the Blaine, Washington border crossing. When pulled in for a secondary security check, she was asked if she was carrying any ‘leafy greens’. Assuming the officers were referring to dried cannabis flowers — and not the non-intoxicating CBD oil she was carrying, which is legal in both British Columbia and Washington state — she said ‘no’.

“I said no because, to me, ‘leafy greens’ is like marijuana, the actual bud, things that you smoke, recreational drugs,” the unidentified Canadian woman told CBC News. “I use CBD daily and it’s not psychoactive, it can’t get me high at the dosage that I’ve been told to take it at. I didn’t think anything of it. I just always have it on me because I take it daily and because of his wording, ‘leafy greens,’ I didn’t fully understand that I needed to declare it.”

Unfortunately for the woman, carrying controlled substances across the border — even in this time of widespread social acceptance and state-based legalization — can have major consequences, including a possible lifetime ban from entering the U.S.

‘You’re in the System for the Rest of Your Life’

“There seems to be a lot of confusion among Canadians entering the U.S. with regards to CBD and THC and all the derivatives from marijuana,” says Leonard D.M. Saunders, a U.S. immigration lawyer. “From my experience, if anything is coming from the marijuana plant, even if it’s an oil or a gummy candy, it seems to be grounds not only for inadmissibility and fines … but also a lifetime ban.”

And the penalty for carrying a controlled substance like cannabis across the border isn’t something one can easily shake — no matter how innocent the infraction.

“Even though she made an honest mistake, if the officers deem that she has a controlled substance with her, and she admitted to it, then she’s inadmissible for the rest of her life,” explained Saunders. “Even if she gets a waiver approved, she’ll still have to go through a renewal every year, two years or five years. I tell people, ‘You’re in the system for the rest of your life’.” 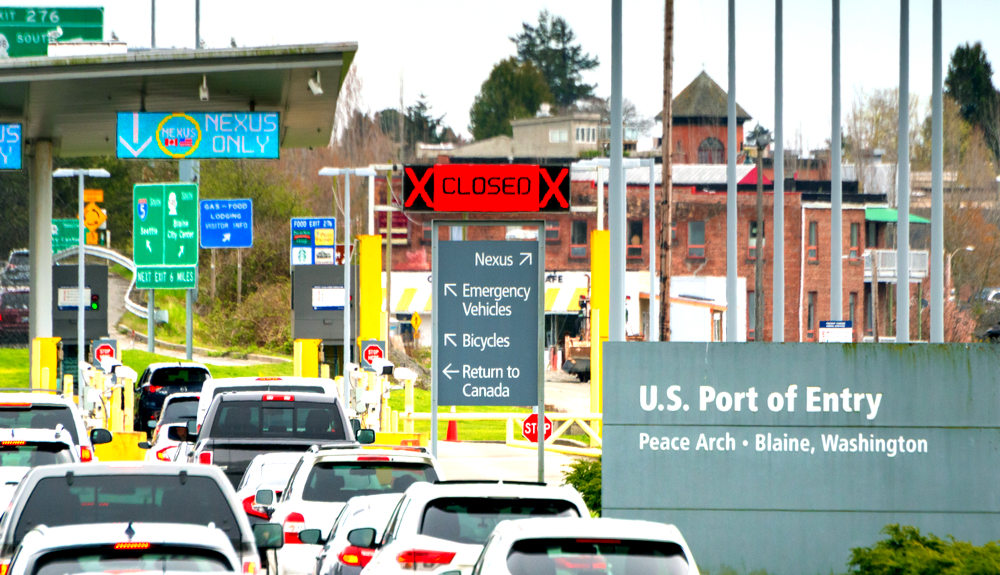 What’s Next for the Canadian Woman?

After being fined $500 by the border security officers for failing to declare the CBD oil, the woman was fingerprinted, denied entry into the U.S., and sent away with a pile of paperwork. The paperwork included an application for a waiver that’s part of an online portal called e-SAFE; an application — which costs $600 — that she must complete if she wishes to gain entry to the U.S.

“It seems like a much more serious thing than anyone had ever told me when I was there at the border,” said the woman.

A frequent border-crosser — often for the purposes of seeing concerts or shopping in Detroit, Michigan — the Canadian woman fears her newfound border issues will follow her for the rest of her life.

“In five years will it peter out, or will I have to continue advocating my whole life now because of this?” said the woman. “I’m still really not sure what’s going to happen — it’s an issue I don’t want to follow me around my whole life.”

Unfortunately for the woman in question, the application process for re-entry is long and complicated. The U.S. Federal Government demands an RCMP-issued criminal record check, reference letters, a personal statement of remorse, proof of employment, work history, and documentation proving place of residence. In certain cases, the U.S. border agency will even require a drug test proving that the individual is not using federally banned substances.

“It’s a lot of personal information that some people would prefer not to give to the U.S. government, but they have to if they want to have a waiver approved,” explains Saunders. “It’s not optional, it’s required.”

A representative for the U.S. Customs and Border Protection clarified that it’s incumbent upon travellers to familiarize themselves with U.S. Federal laws — not the often more lenient state laws — before attempting to enter the country.

In an unexpected turn of events, and just two weeks after the woman was barred from crossing the border, the U.S. authorities reversed the lifetime ban, in what the woman’s lawyer has described as a “best-case scenario.”

“My reaction obviously was shock,” says Saunders. “I was shocked that it was such a 180-degree turn from basically being barred for life to being told that they had on their own reviewed the case and had basically reversed their decision.”

The fact that the U.S. Customs and Border Protection provided Saunders with no reason for the reversal, and refused to comment publicly on the decision, only adds to the confusion around current cannabis laws and international border crossings.

“Did they decide themselves that having CBD oil is not the same as having THC or cannabis? At this point I don’t know,” says Saunders. “Going forward all I can tell people is to be cautious on what they bring to the United States because who knows, today CBD oil is OK, but CBD oil next month may not be. Nobody really knows what’s going on.