Sen. Bernie Sanders (I-VT) made his comeback campaign official, as just last month he announced that he is seeking the Democratic presidential nomination in 2020. This time, with an even more narrowed focus on his core priorities. Racial disparities, criminal justice and changing federal drug and Marijuana laws are what Bernie calls the most important issues the country faces. Many remember Sanders for his strong stance on federal Marijuana prohibition – as he was one of the first major presidential candidates to endorse a Cannabis legalization bill from the Senate. It seems now he’s back and hoping his “grassroots” approach can spark the hearts of many once again.

“I am running for President because we need to invest in jobs and education for our kids, not more jails and incarceration. We need to end the destructive war on drugs private prisons, and cash bail, and bring about major police department reform.” @BernieSanders #Bernie2020 pic.twitter.com/9Gk96hS3dt

During his rallies in Brooklyn and Chicago over the last month, it was common to hear phrases like; “No More profiteering from locking people up, no more war on drugs! No more keeping people in jail because they are too poor to afford a cash bail.” These were just a few statements Bernie made around criminal justice reform. “We are going to change a system in which tens of thousands of Americans every year get criminal records for possessing Marijuana, but not one major Wall Street executive went to jail for destroying our economy in 2008”, he said. His plans include heavier investments into jobs and education through cutting down the $80 billion a year jail and incarceration budget. This would ultimately reduce the number of private prisons and detention centers.

no more war on drugs

no more keeping people in jail because they’re too poor for cash bail” #BernieInChicago pic.twitter.com/npZNJsV3KK

Sanders went on to expand his views on Cannabis policy and how he would like it to take shape. “I’m proud that during my campaign in 2016, we talked about the insanity of having at the federal level Marijuana at the same level, treated the same way as heroin,” he said. His campaign once again concentrated heavily on decriminalizing Marijuana and legalizing Marijuana both on federal levels. Remove Cannabis from the list of federally controlled substances is only the first step.

The industry, however, could see corporate interests making large profits off Cannabis while groups that have been disproportionately impacted by the war on drugs are stuck on the bleachers. It seems Bernie is backing an equal distribution of these profits through promoting complete inclusion. “Ten years ago, everyone was demonizing Marijuana, now these guys are going to make a zillion dollars off it. And you’re right, small business people in the African American communities deserve to be part of that process.” The problem goes “above and beyond Marijuana,” Sanders said. “You have a small number of corporations that control the action” in various industries. However, the issue is “particularly sensitive” given long-term racial and socioeconomic disparities in Cannabis enforcement.

Sanders has a number of rivals competing against him on his run for the 2020 presidential nomination, and we are excited to see his campaign unfold alongside the many other candidates. It will be equally interesting to see how the role of Cannabis evolves as a major debating point in the 2020 elections. 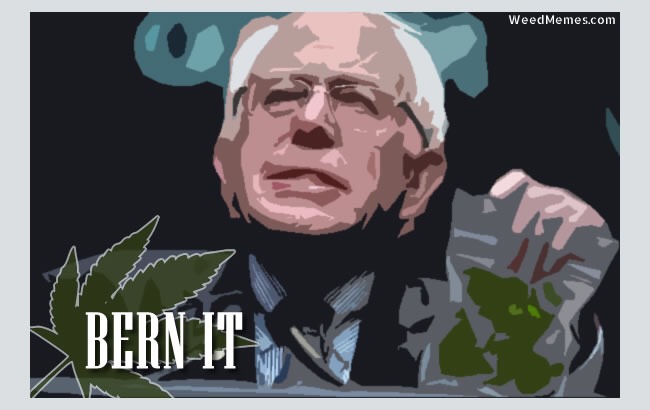 Stay connected to the story, and Happy Investing.