One Harvard Economist Says the U.S. Government Loses up to $20 Billion a Year By Keeping Cannabis Illegal

We know what it looks like when Washington sprints for health care solutions. Unfortunately, that activity usually comes in a time of crisis—usually the news-driven kind. For example, Coronavirus COVID-19 has lit a fire under President Trump and both houses of the U.S. Congress.

What about the multiple diseases and conditions that are known to be affected positively by cannabis? According to the U.S. Federal Government, cannabis is a Schedule I narcotic with a high potential for abuse and no medical value. It sits alongside some of the most dangerous drugs in the world, such as meth. Thanks to the growing global cannabis reform movement, the legal marijuana industry now has a plethora of data to prove there’s plenty of medical value.

What about the recreational value of channelling those who want to alter their mental state away from alcohol and opiates? To understand the continuing resistance to cannabis on Capitol Hill, let’s look at the entrenched interests in the way of marijuana legalization and even the growing movement to decriminalize Psychedelic substances such as Psilocybin aka Magic Mushrooms and LSD.

The Threat to Big Pharma

As mentioned, cannabis is a schedule I drug in the U.S. under the Controlled Substances Act, dating back to the law’s signing in 1970. Marijuana is also a plant known for centuries to have many medicinal benefits to the mind and body. Alzheimer’s disease is a great example; cannabis and LSD are both being investigated for their potential to fight amyloid protein buildup in the brain, a vital mark of the neurodegenerative disease. Breakthroughs are possible, but laws are in the way safeguarding the pharmaceutical industry’s ability to be the only route to market for a potential Alzheimer’s cure—despite how ineffective pharma has been at treating the disease through clinical trials.

The Opioid Epidemic in the United States has been a cash cow for entire pharmaceutical companies and has even created family opioid empires for the likes of the now-infamous Sackler family. The Sackler’s founded Purdue Pharma, makers of the drug Oxycotin, the main culprit behind the crisis. The opioid kingpins have been significant donors to institutions and politicians amid their secretive scheming to drive addiction and profits.

Chronic pain sufferers are now caught between a rock and a hard place as the U.S. Drug Enforcement Administration (DEA) aims to restrict opioid manufacturing and undo the damage done by nefarious companies and complicit doctors. Patients need to feel better but are often stigmatized as opioid addicts, with the disturbing effect that people in need are denied access to prescriptions, in some cases because of racial bias, according to research. Post-Traumatic Stress Disorder (PTSD) is another condition that has severe effects and associated stigma and where organizations like Veteran’s Ananda are working to advance holistic and traditional remedies, including cannabis, to succeed where drug companies have not. 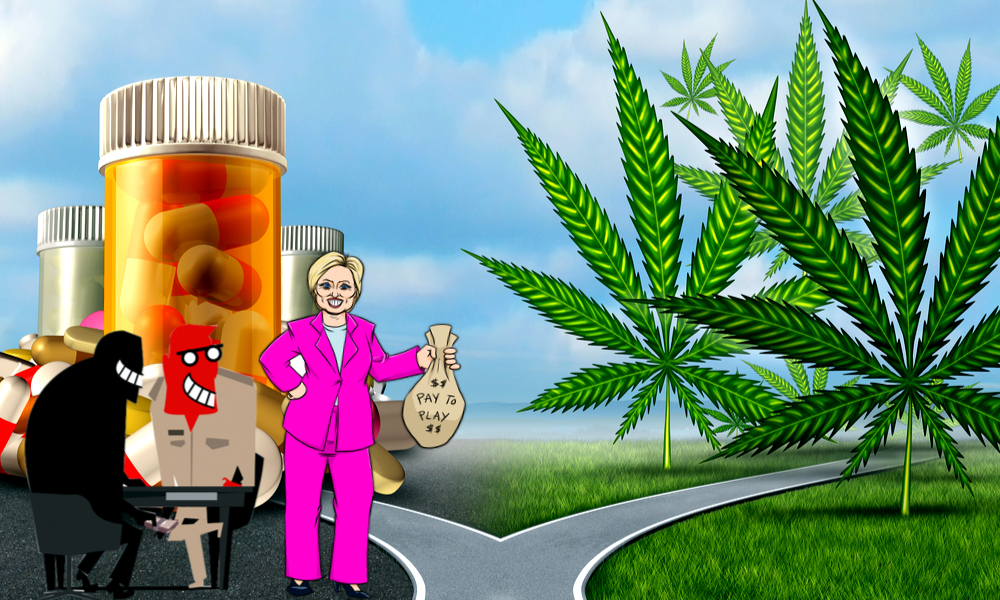 March and April are income-tax time in America, which means that every family is scrambling to tally up all of their eligible expenses to bring down their payment to the Government and hopefully draw a refund from Washington D.C. The Government expects cash from cannabis companies but won’t allow them the typical deductions afforded companies in other industries nationwide. Deductions for cannabis-related medical expenses by patients who buy legally aren’t allowed either thus extending the broken logic that seems only meant to handicap cannabis against its pharma competitors.

2020 U.S. Presidential candidate Bernie Sanders has vowed to legalize marijuana at the Federal level on his first day in office, a populist appeal that is part of his Democratic primary campaign. Maybe one reason behind the recent consolidation of corporate support behind Joe Biden is that pharma executives are feeling the Bern in a bad way. Just take a look at the stock market swings in pharmaceutical company shares depending on which Democratic candidate is on the rise that given day. “Health Shares Soar as Medicare for All Fears Recede,” stated one recent Wall Street Journal headline.

No matter who comes out as the lead Democrat heading into battle against Donald Trump, the national economic case for legal marijuana is clear. Adult-use cannabis sales topped $39 million in the first month of legal sales in Illinois, among many other state-level and city-level examples. That economic boost may be a godsend if a Coronavirus-driven recession comes around. Yet, when it comes to banking access, the multi-billion dollar legal cannabis industry with storefronts all over the United States is still stuck moving cash in bags and pallets reminiscent of organized crime or a third-world country payoff. Some companies are employing off-duty cops and armoured trucks instead of taking advantage of e-commerce and services like Square that are common to consumers.

Acreage Holdings (CSE: ACRG.U) (OTCQX: ACRGF) (FSE: 0VZ) CEO Kevin Murphy recalled a Nevada dispensary owner sending him a photo of $2 million in $20 bills. Although it probably appeared the pile of cash was for the mafia, it was actually for the IRS. The underworld-like transactions of today’s legal cannabis industry eat away at the establishment of a market for safe, effective medical interventions and the rights of patient-consumers.

So why hasn’t the United States legalized cannabis at the Federal level yet? Aren’t the Feds losing billions of dollars by keeping a plant that has been used freely for thousands of years illegal? Economist Jeffrey Miron of Harvard University believes the U.S. Federal Government loses up to $20 billion per year due to lost tax revenue and the costs associated with keeping cannabis illegal.

Miron also stated that if the Government lifted its federal ban, it could generate roughly $9 billion in tax revenue and save another $9 billion in enforcement costs. It would seem like a no brainer decision for the Feds on an economic level, but as we dig a little deeper, there’s more to the story than meets the eye.

Thanks to Section 280E of the U.S. Tax Code, cannabis companies aren’t allowed write-offs for regular business expenses, even in states where with legal marijuana. Because of this, the Internal Revenue Service (IRS) saves approximately $500 million a year by not allow cannabis firms the same write-offs as companies in other industries. In the eyes of the Feds, legal marijuana businesses are treated like drug dealers. Matt Karnes of GreenWave Advisors believes the Federal Government may save more than $500 million from Section 280E. Karnes estimates that between 2012 and 2017, the Government earned $8 billion from legal cannabis firms.

According to all this, the Government would still be out a lot of money by not legalizing pot. To fully answer the question, we need to head down a more shady path, which includes the likes of individual politicians and large corporations that may be profiting largely by keeping cannabis illegal. Massive industries such as Big Pharma, Big Tobacco and Private Prisons could suffer greatly if cannabis is legalized. This may explain why they donate many millions of dollars every election to back anti-legalization candidates and lobbying efforts.

While many Big Tobacco firms continue to fight legalization efforts, others such as Marlboro maker Altria Group (NYSE: MO) have taken a much different approach by investing billions of dollars in the legal cannabis industry. Last year, Altria set the cannabis sector ablaze after the company made a $2.4 billion investment in Canadian licensed producer (LP) Cronos Group (TSX: CRON) (NASDAQ: CRON) (FRA: 7CI).

The total amount of money donated to anti-cannabis lobbying efforts and political campaigns is hard to calculate due to the lack of reliable records. Still, it’s likely well into the billions. It’s clear the U.S. Federal Government is losing out on substantial tax revenues by keeping cannabis illegal. The tangled web of powerful politicians and corporations that are profiting by maintaining the status quo are likely the main reason for the continuation of Federal prohibition in America.

However, the cannabis reform train left the station years ago and is only gaining more and more momentum as additional U.S. states hop on the bandwagon. It’s only a matter of time until that train plows through the web of political corruption and, in the process, lifts the Federal cannabis ban once and for all.