A Mystical Journey: The Therapeutic Value of Sights and Sounds in Psychedelic Therapy - The Cannabis Investor

A Mystical Journey: The Therapeutic Value of Sights and Sounds in Psychedelic Therapy

The more enduring and effective transformative effects of using psychedelics either recreationally or as a therapeutic aid are the mystical experiences users talk about that totally change how they live their life.

Many say these mystical experiences from psychedelics became one of the most important events in their lives, as reported in a survey of 1,993 psilocybin users by Johns Hopkins researchers. Approximately 60% of respondents considered their experience to be among the top 10 most psychologically and personally meaningful experiences of their lives.

Princeton philosophy teacher W.T. Stace wrote in his book “The Teachings of the Mystics” that mysticism involves “the apprehension of an ultimate nonsensuous unity in all things” that “entirely transcends our sensory-intellectual consciousness.”

Alan Watts, a British researcher who studied and wrote about Buddhism, Taoism and Hinduism, experimented with psychedelic compounds such as LSD, mescaline and psilocybin. Watts described mystical experiences as peculiar states of consciousness in which the individual discovers himself to be one continuous process with God or with the Universe.

“If any of the psychedelic chemicals would, in fact, predispose my consciousness to the mystical experience, I could use them as instruments for studying and describing that experience as one uses a microscope for bacteriology, even though the microscope is an ‘artificial’ and ‘unnatural’ contrivance which might be said to ‘distort’ the vision of the naked eye,” Watts wrote in an article for the California Law Review in 1968.

Mystical experiences during psychedelic therapy sessions can create enduring personal meaning in healthy volunteers and therapeutic outcomes in patients, according to one study, including reduction and cessation of substance abuse behaviors and reduction of anxiety and depression in patients with a life-threatening cancer diagnosis.

Scientists are finding out that this mystical transportation—this journey into self, into ego, this flight of the soul—is enhanced when the visual experience is linked to the aural experience.

Shamans and other spiritual guides have been connecting music with psychedelics consumption for thousands of years. 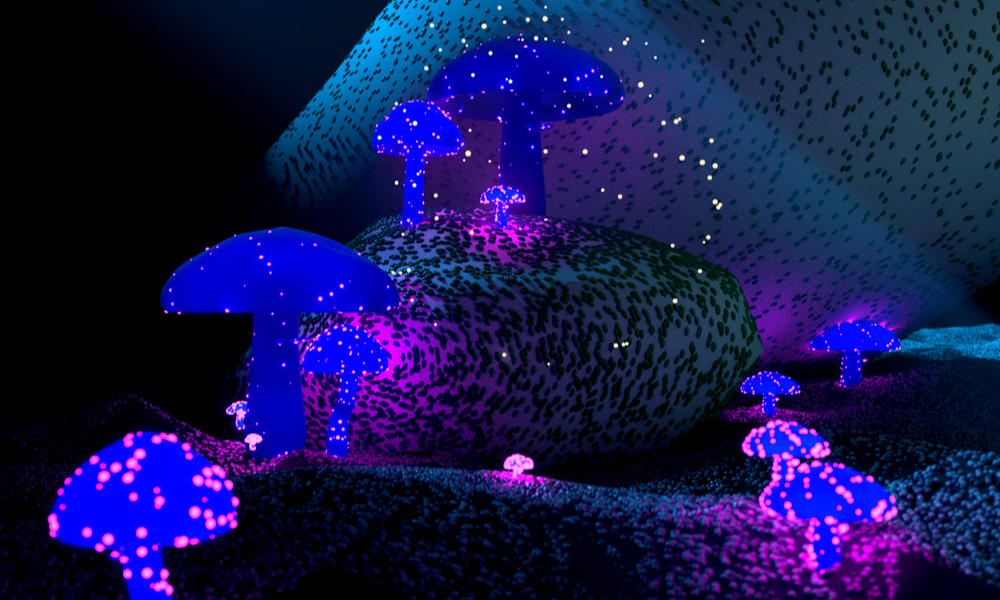 “Music plays a central role in psychedelic therapy,” Kaelen said during the Psyched 2020 conference in early June. “We have demonstrated that the emotions experienced while listening to music are significantly enhanced on psychedelics. We have looked at the way the brain processes certain acoustic features in the music with LSD,” he said.

In 2015, Kaelen led a study about LSD and music, where ten healthy volunteers listened to five different tracks of instrumental music during each of two study days—a placebo day followed by an LSD day—separated by 5 to 7 days. Subjective ratings were completed after each music track, and included a Visual Analogue Scale (VAS), a psychometric response scale used in questionnaires to measure the intensity and frequency of various subjective characteristics; and the nine-item Geneva Emotional Music Scale (GEMS-9), to measure emotions evoked by music.

Results demonstrated that the emotional response to “wonder,” “transcendence,” and “power” was enhanced by LSD.

The study concluded that their findings “reinforce the long-held assumption that psychedelics enhance music-evoked emotion, and provide tentative and indirect support for the notion that this effect can be harnessed in the context of psychedelic-assisted psychotherapy.”

In psychedelic therapy using music, every song evokes a very particular experience, Kaelen said during his Psyched 2020 presentation. “Music provides not just a direction, but an experience that the individual is fully immersed in, and thereby provides an opportunity for an increase in learning.”

Psychedelics bring the mind into a more flexible state of mind, making it easier for the individual to experience himself from a radically different and new perspective. “This is primarily why the experience can be so significant,” he said. “Psychedelics provide the opportunity for change, an opportunity to step outside the usual sense of self that can be quite rigid.”

Kaelen talked about some of the reactions to music that people in psychedelic therapy experienced: “a great sense of harmony,” “an emotional release,” “memories of home and family,” “felt like music picked you up and carried you to the next part—a vehicle that moved you to the journey inside of yourself.”

So is this mystical experience so powerful that it can even create a religious awakening? According to two researchers in their book “The Psychedelic Gospels,” there is scriptural support that mushrooms were the inspiration of the vision of the Kingdom of Heaven that Jesus spoke about, and that he was initiated into these mystical practices in Egypt.

The researchers contend that both the Tree of Knowledge and the Tree of Immortality in the Garden of Eden were actually mushrooms.

What researchers are discovering is that the mystical experiences users had in experimentations with psychedelics was a life-changing experience that had positive effects on such emotionally-charged events as interpersonal closeness, gratitude, life meaning and purpose.

“Further investigation of psilocybin-occasioned experiences may have broad implications for the development of drug and non-drug interventions in both therapeutic and nontherapeutic applications in order to engender enduring positive trait-level changes in attitudes and behavior and in healthy psychological functioning,” they concluded.