The Oregon Secretary of State Office confirmed that a total of 132,465 valid signatures were collected, exceeding the 112,020 signatures needed to qualify. Of those signatures collected, officials confirmed an 82.3% valid rate.

In addition to voting on the therapeutic psilocybin measure, Oregon voters will also have a chance to vote on an initiative to decriminalize low-level drug possession. That drug reform bill would leverage tax revenue generated from legal cannabis sales — which the state approved in 2014 — to expand substance abuse treatment programs.

“We are thrilled that Oregon voters have come together to tackle mental health and depression by qualifying this ballot measure for the November election,” explains Tom Eckert, licensed psychotherapist and co-chief petitioner for the Yes On IP 34 initiative. “Oregonians deserve access to psilocybin therapy as a treatment option — and now we officially have a chance to win it.”

The Yes On IP 34 campaign recently took to Twitter to show their enthusiasm for the ballot inclusion:

“It’s official – WE DID IT! After turning in 132,465 signatures, the campaign team is proud to announce we are officially on the 2020 November ballot. Come #electionday2020, every Oregon voter will have the opportunity to make psilocybin therapy legal for those in need.”

If Oregon voters approve the measure in November — referred to as IP 34 — the state could become the first U.S. jurisdiction to approve and implement a legalized model for the therapeutic use of psilocybin. Additionally, no specific conditions would exist for individuals to qualify for the therapy.

“We want to thank the thousands of volunteers and the over 160,000 Oregonians that made this ballot measure possible, and we look forward to talking with voters over the next four months to share the research and show why psilocybin therapy is a part of our collective answer to the mental health crisis our state faces,” says Sheri Eckert, the other co-chief petitioner of the Yes On IP 34 campaign. “This careful, regulated approach can make a real difference in people’s lives, and we’re looking forward to bringing this program to the state.” 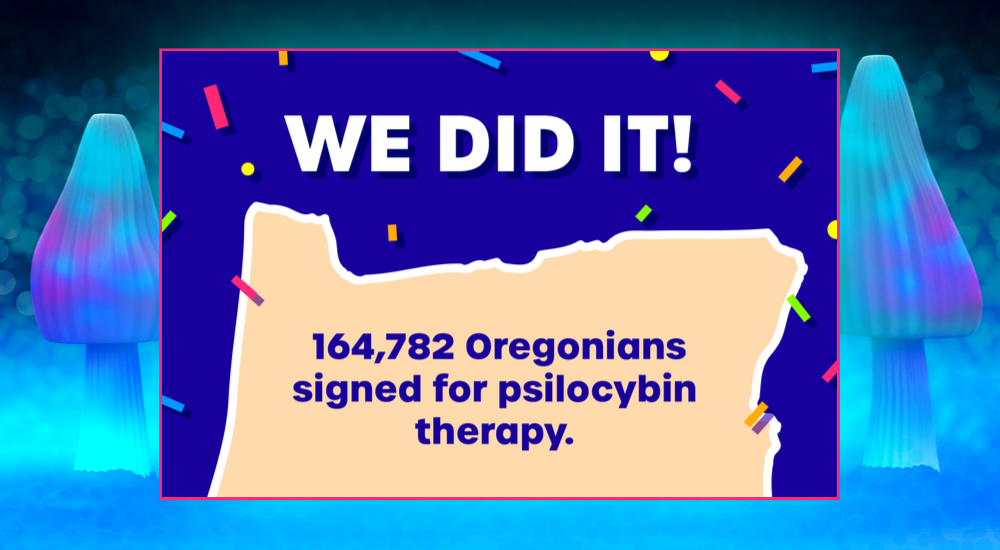 Oregon’s inclusion of legalized therapeutic psilocybin on the November 2020 ballot is just the latest example of psychedelics reform in the U.S.

In Montana, drug reform activists recently submitted more than 130,000 signatures in a bid to qualify two cannabis legalization measures for the November ballot.

Meanwhile, before the COVID-19 outbreak, South Dakota activists won enough voter support to include a legal cannabis measure on the November ballot. Following the start of the outbreak, in April, the New Jersey legislature approved the inclusion of legalized cannabis on the ballot.

Activists in Mississippi collected a sufficient number of valid signatures to put a medical marijuana initiative on the ballot, which is expected to appear alongside a competing lawmaker-approved proposal. Cannabis activists in North Dakota, meanwhile, are expected to pursue ballot inclusion in 2022.

Finally, drug reform activists in Washington state had been targeting a decriminalization ballot measure, but concerns surrounding COVID-19 forced them to target the legislature instead.

2020 has been a challenging and unpredictable year, to say the least, but drug reform activists across the U.S. are making the most of this historic moment in time.

Also Read: Closing in on Equal Access For All: The Evolution of the Psychedelics Industry