Canopy Vs. Aurora – The Clash of Titans - The Cannabis Investor

Canopy Vs. Aurora – The Clash of Titans

In the midst of all the hot action in this year’s Canadian marijuana sector, there is one debate that can be heard from the streets of the suburbs to the corners of Bay St. When all of the *cough cough* smoke settles, who will secure the top spot as not only the largest Cannabis producer but also the largest Cannabis Conglomerate and seller in all of Canada? The largest contenders being Canopy Growth Corp and Aurora Cannabis, with excellent track records extending over the last 8 years, both companies have ruled the space through early adoption, staining their names as leading competitive brands in the minds of consumers, and by no avail has it been an easy job. Canopy (14 Billion Market cap), with its early mover advantage was able to secure the likes of billions of dollars from Constellation brands, where Aurora (11.5 Billion Market Cap) – who had to play a game of catch up- has used an early on merger and acquisition strategy through the distribution of outstanding common shares.

Let’s dive a bit deeper. With so many players in the industry, you begin to forget who owns who, and who has made investments in what! 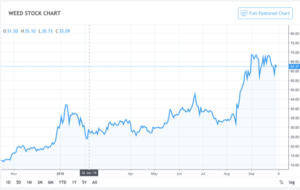 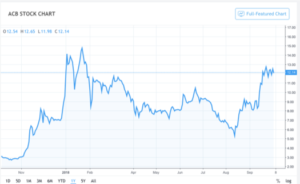 Canopy’s, very own TWEED, which was Bruce Linton’s brainchild, was extremely aggressive, having acquired Mettrum and Bedrocan back in 2016 which secured their spot at the top of everyone’s watch list. Eventually securing Constellation brands as a partner, this company became the catalyst for an entire industry and a benchmark of what was possible. Canopy also has been making swift moves on retail fronts, acquiring brick and mortar companies, such as HIKU brands this past July, for a $250 Million all-stock deal.

Aurora, in an attempt to play catch up, has made heaps of investments within the last 2 years. Some of the minor purchases in common shares include HempCo, The Green Organic Dutchman, Micron waste technologies, Radient Technologies, CTT Pharma and a lot more. Their major acquisitions include Med Releaf, CanniMed, and ICC labs. We’ve noticed the CEO of Aurora, Terry Booth, believes in a grassroots approach, and has a Warren Buffet “esk” style behind his investments, as he allows Aurora’s acquisitions to independently operate under their original brand names and original management. However, through the constant acquisitions auroras share count has Diluted to over 900 million outstanding shares, which gives a negative tint to many investors who aim to purchase lower float companies.

Not all companies are lucky enough to land a beverage deal like Canopy, who then had mountains of liquid cash to grow the company. Considering they had to dilute the share count, Aurora has impressively used those shares and shareholders seem to be happy, as the stock has begun approaching the all-time highs again this month. Both companies nearly sit at the same spot now, with talks of Coca-cola looking into Aurora, we think it is only a matter of time before more beverage companies, big pharmacy, and cigarette companies seek out deals between the runner up!

Aiming to stand on either side of the fence in this debate, we don’t doubt this duo can surmount to the Coca-cola and Pepsi of the Cannabis sector with the foundational on their sides. What’s most important to note, is both companies have the capacity to produce roughly 500,000kg of Cannabis individually, and between the two giant footprints could support the entire cannabis sector of Canada. However, Canopy has extended supply agreements in place with the provinces for 31,200kg in the first 6 months with the option to extend to 80,000kg within the first year. Aurora, combining with their largest acquisition of MedReleaf, now has over 31,500kg contracted in for the first 6 months, and with Aurora sky, their state of the art facility coming online by year end, they may have the lowest cost of production per gram between the two, sitting under $1/g.

Canopy has to be the better international buy, with operations scaling through Germany, Denmark, Spain, Australia, Brazil, Chile, and Jamaica.

Aurora also operates in many of these countries, again slightly lagging behind because of lack of funding, but none the less, miles ahead of the rest of the marketplace.

SHOW ME THE MONEY – The Bottom Line

Lets take one final peak at revenues. With Recreational sales around the corner, and both companies so well positioned, revenue could be distributed either way. Revenue recorded up until now, although coming only from their medical client sales, is still a very good representation of the company’s current management and their ability to allocate and structure the finances through key decision-making.

Canopy had Continued revenue acceleration with total first quarter revenues of $25.9 million representing a 63% increase over the quarter ended June 30, 2017 and a 14% increase over revenues of $22.8 million in the fourth quarter of fiscal 2018. Canopy was also poorly known for their operating loss, due to the rapid expansion and spending.

Aurora has to take the cake here with their revenue up over 223% from the past year. They sat at around 33 million for the quarter, including revenue from MedReleaf. Paving the way, Aurora has really “sparked” the market awake, for lack of better words. Showing the world that without a global beverage brand backing the company they were still able to capture more revenue through customer loyalty, quality of product, and brand appeal.

WHERE DO WE STAND?

Both companies are exceptionally well‑positioned in all of the markets, including adult consumer-use market, Canadian medical and the international medical markets, with compelling brands, strong patient bases and major consumer recognition.

We’ll leave the decision up to you. The market seems no less then excited to see what the upcoming year of Recreational sales looks like.

Continue to follow the story with us and Happy Investing!

Contributor
Alexander Simonelli
6 years experience in Capital Markets with a degree of Entrepreneurship and finance Ryerson University. You can find Alex on his free time, pursuing his multiple business endeavours, with his family, or playing music around the city. Feel free to follow him @alexxsimonelli