“These preliminary results represent the excellent efforts the CannTrust team has made in increasing output at our Niagara perpetual harvest greenhouse. We are quickly approaching our stated capacity of 50,000kg per year from our Phase 2 expansion. Our 96% sequential increase in production over the prior quarter will enable us to service both our rapidly growing base of medical patients and the high demand in the recreational market for our award-winning products and brands.” said Peter Aceto, Chief Executive Officer. “We expect gross margins between 42% to 46% in the first quarter of 2019, and plan to deliver continued improved profitability as our volumes increase, as we make targeted price increases and as we realize the benefits of our low-cost high quality production strategy.”

Operational highlights for the quarter ended March 31, 2019 and subsequent period are as follows:

CannTrust has not yet completed the financial close process for the quarter ended March 31, 2019. The Company’s independent registered public accounting firm has not completed its review of the results for the quarter ended March 31, 2019. Set forth below are certain preliminary estimates of the results of operations that the Company expects to report for its first quarter of 2019. Actual results may differ materially from these estimates due to the completion of the financial closing procedures, final adjustments and other developments that may arise between now and the time the financial results for the first quarter are finalized.

The following are preliminary estimates for the quarter ended March 31, 2019: 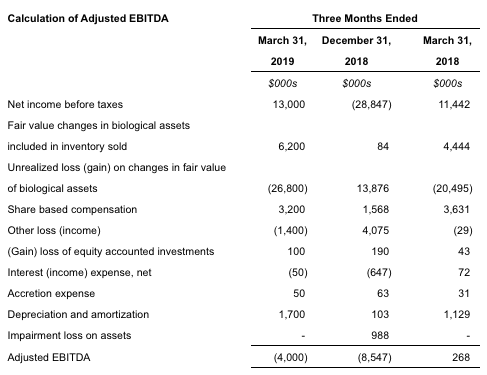 CannTrust has provided a range for the preliminary results described above primarily because its financial closing procedures for the month and quarter ended March 31, 2019 are not yet complete. As a result, there is a possibility that final results will vary from these preliminary estimates. The Company currently expects that final results of operations and other data will be consistent with the estimates set forth above, but such estimates are preliminary and actual results of operations and other data could differ materially from these estimates due to the completion of financial closing procedures, final adjustments and other developments that may arise between now and the time the Company releases unaudited condensed interim consolidated financial statements for the three months ended March 31, 2019and March 31, 2018. CannTrust undertakes no obligation to update or supplement the information provided above until it releases results of operation for the quarter ended March 31, 2019. KPMG LLP has not audited, reviewed, compiled or performed any procedures with respect to this financial data. Accordingly, KPMG LLP does not express an opinion or any other form of assurance with respect thereto. These are estimates which should not be regarded as a representation by the Company, management as to actual results for the quarter ended March 31, 2019.

CannTrust is a federally regulated licensed producer of medical and recreational cannabis in Canada. Founded by pharmacists, CannTrust brings more than 40 years of pharmaceutical and healthcare experience to the medical cannabis industry and serves more than 69,000 medical patients with its dried, extract and capsule products. The Company operates its Niagara Perpetual Harvest Facility in Pelham, Ontario, and prepares and packages its product portfolio at its manufacturing centre of excellence in Vaughan, Ontario. 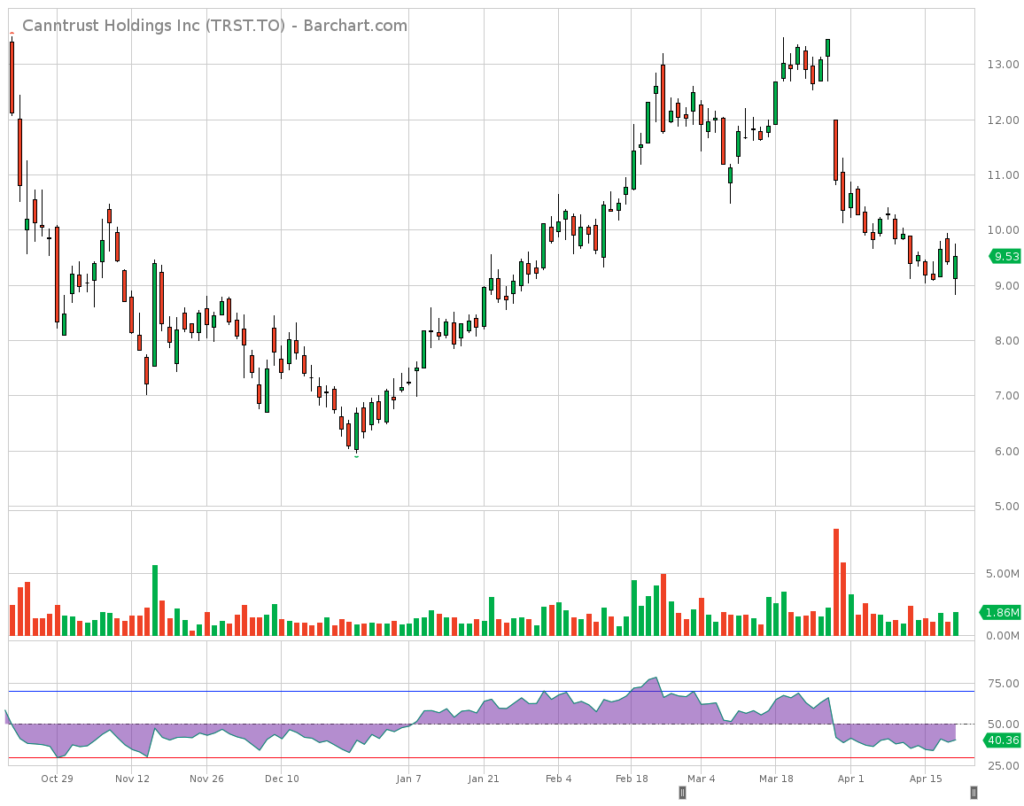 Create your own TRST technical and interactive chart – Barchart

Technical Analysis for TRST by TradingView