3 Lagging Cannabis Stocks That Could Be Set To Surge

The month of January has historically been a great month for Cannabis stocks and the stock market as a whole. After a brutal finish to 2018 caused by tax loss selling and macroeconomic uncertainties, the markets have rallied sharply off the bottom to start 2019 off with a bang.

Investors that had the cojones to place their bets during the Christmas holidays are now being rewarded handsomely for their risks. In regards to the Cannabis sector specifically, the 2019 year started off with the mid-caps taking center stage and producing the biggest gains in the opening week. One could guess as to why the mid-caps were the top performers. Perhaps this group of stocks makes ideal takeover targets and with M&A in the sector heating up investors are speculating as to which stock will be gobbled up next.

As of the time of this writing, we are starting to see the large caps make serious moves. Canopy Growth (TSX: WEED) (NYSE: CGC), Cronos Group (TSX: CRON) (NASDAQ: CRON) and Tilray (NASDAQ: TLRY) have all made sizeable gains this week. Usually, the large caps are the one leading charge so this situation is interesting, to say the least.

With the large caps in motion and a good chunk of the small caps making similar moves, we decided to scan the markets looking high-quality Cannabis stocks with strong near term catalysts that are currently lagging behind the sector and have yet to make a substantial move higher. This strategy has been successful in the past as almost every legit Cannabis stock will eventually follow the pack.

Our market scan produced the following three stocks. Take some time to review the companies detailed below as they may be gearing up to make a serious move higher in the very near future.

Aleafia is a vertically integrated, national cannabis company with major medical clinic, cannabis cultivation and R&D operations. The company is a federally licensed producer and vendor of cannabis and will reach an annual production capacity of 98,000 kg of dried cannabis in 2019. Aleafia operates medical cannabis clinics staffed by physicians and nurse practitioners, with over 50,000 patients. The company is highly differentiated, maintaining the largest medical cannabis dataset in the world.

Aleafia recently announced an agreement with Emblem Corp. (TSXV: EMC) (OTCQX: EMMBF) to acquire all of their issued and outstanding shares in a deal valued at approximately $173.2 million. This pending merger is highly complementary to both companies as it fills in the gaps in the areas each is lacking. The deal has the full support of Emblem’s board of directors and a special shareholder meeting is expected to be held before March 8, 2019, to consider the transaction. The closing of this pending acquisition will catapult Aleafia into the top handful of Canadian LPs and will leave them with cash reserves of roughly $70m and an annual production capacity of approximately 138,000 kg.

Looking at the ALEF chart below we can see the stock has been consolidating nicely after the sector-wide correction. The stock was one of the few to hold it’s 200 day SMA. The current formation seems to indicate a bottoming pattern and the tightening of the range suggests a major move in either direction could be imminent. With the sector starting to rally it’s highly possible ALEF follows suit. 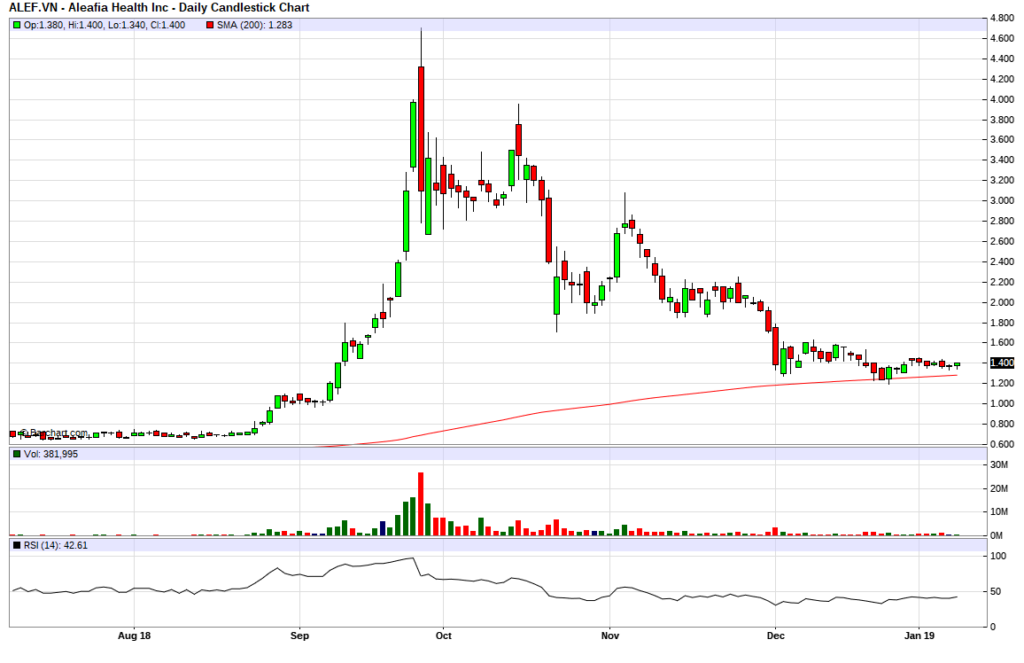 Aurora Cannabis has a funded capacity in excess of 500,000 kg per annum and sales and operations in 22 countries across five continents, Aurora is one of the world’s largest and leading cannabis companies. Aurora is vertically integrated and horizontally diversified across every key segment of the value chain, from facility engineering and design to cannabis breeding and genetics research, cannabis and hemp production, derivatives, high value-add product development, home cultivation, wholesale and retail distribution.

Aurora recently announced guidance for fiscal Q2 2019 anticipating revenues in the $50m to $55m range. Although these estimates came in lower than analysts expectations it’s still a step in the right direction for Aurora as this will be their best quarter ever by a large margin. Consensus analysts estimates were $67m.

At the time of this writing ACB has already started to make the move higher we expected and is trading up 7% on the day. Last time the sector ran in the fall of 2018, ACB lagged behind the pack before breaking out for a 100%+ gain in 4 weeks. 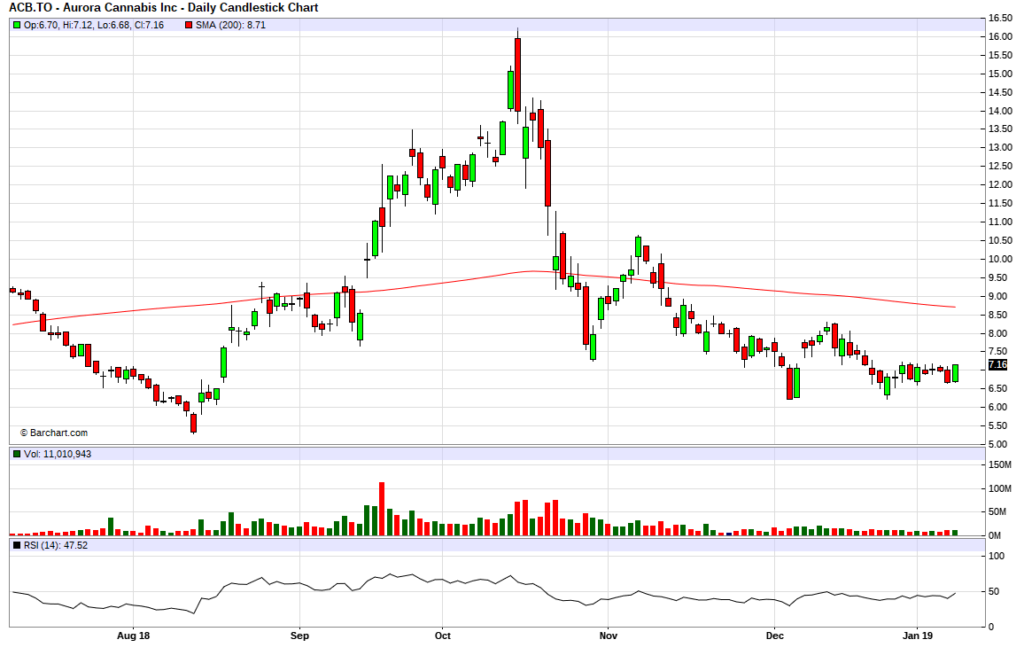 Trulieve is the first and leading medical cannabis company in the state of Florida, the third most populous state in the United States.  Trulieve is a vertically integrated “Seed to Sale” operation with 900 employees and growing.  Trulieve boasts of over 90 SKUs and is constantly adding new, fresh and exciting items to its product line.  With 18 dispensaries spread throughout Florida and next day delivery service, Trulieve provides important and efficient access to thousands of patients every day. Trulieve is committed to growing its dispensary footprint with plans to increase the number of dispensaries to 30 by January 31, 2019.

Trulieve is one the top U.S. multi-state operators (MSO) currently trading on the CSE. The decision to trade in Canada on the CSE instead of the OTC Markets has allowed the company to tap into the capital markets and raise substantial dollars that would have otherwise not been available. Over the past week or so other major U.S. MSOs such as Acreage Holdings (CSE: ACRG.U) (OTCQX: ACRGF) and Curaleaf Holdings (CSE: CURA) (OTCPK: CURLF) have been on a tear producing gains of roughly 100% and 60% respectively. Looking at the TRUL chart below we can see the stock has bounced nicely off the $9 area and looks primed to make a potential move higher. A move from current levels back to the 52 week high represents a possible gain of roughly 100%. 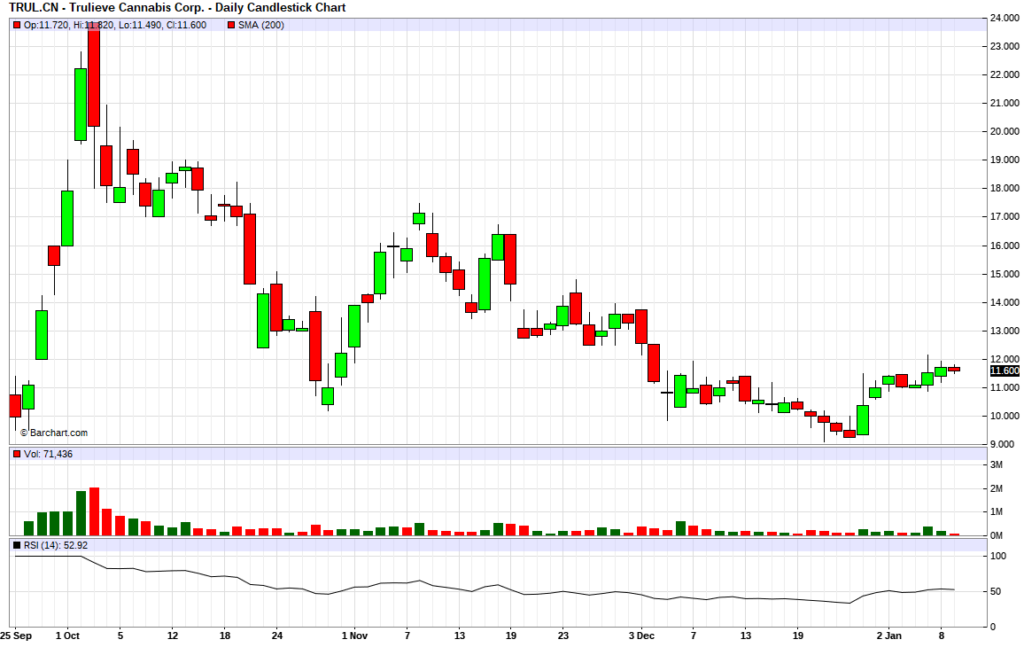 Best of luck to you all and happy trading.