With over 230,000 patients on the registry and counting, Trulieve continues to match the state’s brisk growth pace

ORLANDO, FL, June 21, 2019 /CNW/ – Trulieve Cannabis Corp. (CSE: TRUL) (OTC: TCNNF) (“Trulieve” or “the company”), a leading and top-performing cannabis company in the United States, announced it is opening the doors of its 29thstorefront in Florida with a new dispensary in Orlando. The store, which is their second in the area, will offer natural relief to patients throughout the Central Florida area.

“We’re excited to expand our reach in the Central Florida area and further ensure consistent, safe, and reliable patient access. Opening a second store in a market like Orlando, where a large portion of patients are concentrated, was important to us as we work to ensure patients continue to have direct, safe access to the medication they rely on,” said Trulieve CEO Kim Rivers.

Presently, Trulieve operates 28 other dispensaries throughout the state of Florida, including the original Orlando and nearby Tampa, Clearwater, and Edgewater locations. As part of the company’s mission to provide safe, reliable access for patients statewide, Trulieve will continue opening stores as the patient registry and demand grows.

In stores and online, patients will find Florida’s largest selection of THC and CBD products, available in a variety of delivery methods, including smokable cannabis, concentrates, tinctures, topical creams, vaporizers, and more.

Trulieve also offers home delivery statewide for patients unable to make it to a physical store, in addition to its 29 dispensaries in locations across the state from Pensacola to Miami.

The Office of Medical Marijuana Use recently announced the registry had surpassed 231,000 registered medical marijuana patients with an active ID card, with Trulieve consistently selling over 60% of the state’s overall volume, per the Florida Department of Health. There are presently more than 2,300 registered ordering physicians in the state of Florida as well.

To celebrate their newest store, Trulieve will be holding a press conference on Friday, June 21st at 10:00 AM, with doors opening and press tours of the new dispensary immediately following.

About Trulieve Trulieve is a vertically integrated “seed-to-sale” company and is the first and largest fully licensed medical cannabis company in the State of Florida. Trulieve cultivates and produces all of its products in-house and distributes those products to Trulieve-branded stores (dispensaries) throughout the State of Florida, as well as directly to patients via home delivery. Trulieve also operates in California, Massachusetts, and Connecticut. Trulieve is listed on the Canadian Securities Exchange under the symbol TRUL. 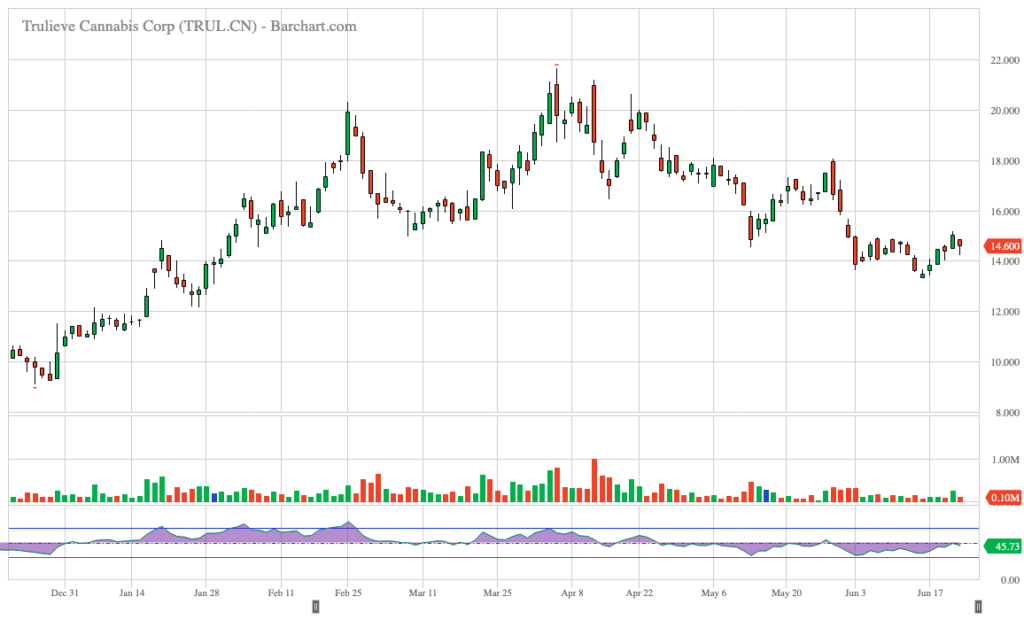 Technical Analysis for TRUL by TradingView