As previously announced, in anticipation of the passage of the hemp legislation in Texas, Village Farms has begun conversion of half of its 1.3 million square foot, ultra-high-tech Permian Basin greenhouse (which utilizes the Company’s proprietary GATES® technology) for the cultivation of high-CBD hemp and CBD extraction.  The Texas Hemp Legislation will require licenses for both the cultivation and processing of hemp and Village Farms plans to apply for the requisite licenses as soon as it is permitted to do so.  No time frame has yet been provided by the State of Texas for the licensing process.

“The Governor’s signing of this bill into law formalizes a significant opportunity for Village Farms as a first mover in the Texas hemp industry and will allow us to capitalize on the expected demand for premium-grade hemp grown in controlled-environment facilities for the high-end health and wellness and the pharmaceutical industries,” said Michael DeGiglio, CEO, Village Farms International. “Conversion of half of Permian Basin greenhouse in West Texas for hemp production is now well underway and we look forward to commencing production as soon as possible upon Texas establishing a licensing and regulatory framework for hemp and CBD.”

Village Farms is one of the largest and longest-operating vertically integrated greenhouse growers in North America and the only publicly traded greenhouse produce company in Canada. Village Farms produces and distributes fresh, premium-quality produce with consistency 365 days a year to national grocers in the U.S. and Canada from more than nine million square feet of Controlled Environment Agriculture (CEA) greenhouses in British Columbia and Texas, as well as from its partner greenhouses in British Columbia, Ontario, and Mexico.  The Company is now leveraging its 30 years of experience as a vertically integrated grower for the rapidly emerging global cannabis opportunity through its 50% ownership of British Columbia-based Pure Sunfarms Corp., one of the single largest cannabis growing operations in the world.  The Company also intends to pursue opportunities to become a vertically integrated leader in the U.S. hemp-derived CBD market, subject to compliance with all applicable U.S. federal and state laws, Village Farms has established two joint ventures, Village Fields Hemp and Arkansas Valley Green and Gold Hemp, for outdoor hemp cultivation and CBD extraction and is pursuing controlled environment hemp production at a portion of its Texas greenhouse operations, which total 5.7 million square feet of production area. 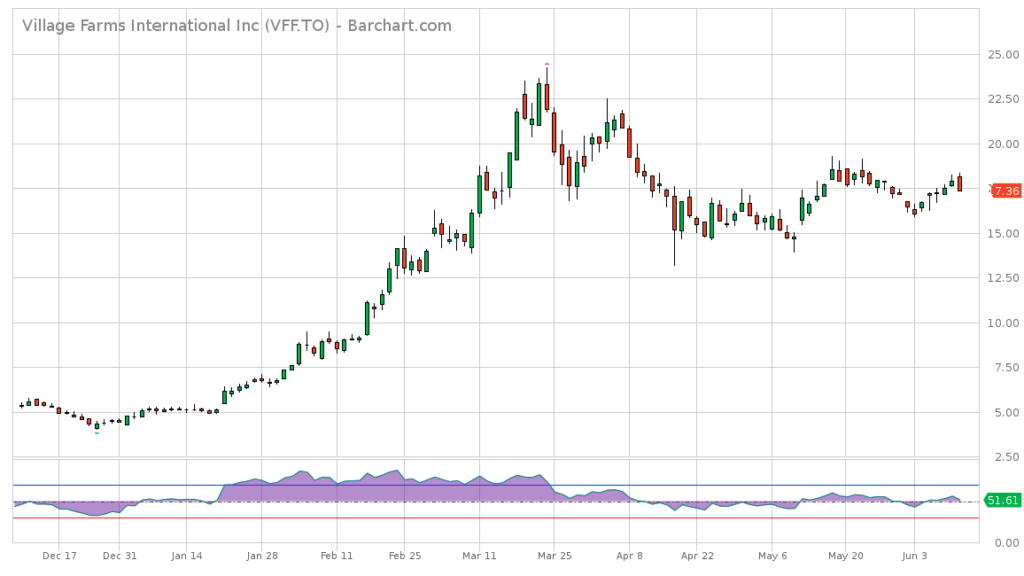 Technical Analysis for VFF by TradingView