Recent Earnings Show These U.S. Pot Stocks Are Having Huge Success in Florida

How Would the Potential Legalization of Adult-Use Cannabis Affect These Sunshine State Operators?

33 U.S. states already have some sort of legalized cannabis laws on the books with more set to join the fold through ballot measures or the legislative process. This includes the surprising underdog markets like Arkansas and South Dakota, which lean Republican and are not strong economically. The state with the most economic strength where major cannabis market changes are afoot is the number four state in the country by GDP–Florida. The rich economy and existing medical marijuana base make it appealing for a range of corporations, independent growers and cannabis operators.

Multiple publicly traded companies are involved in the growing sunshine state market, with a clear medical cannabis market leader already emerging–Multi-state operator (MSO) Trulieve Cannabis (CSE: TRUL) (OTCQX: TCNNF). However, potential earthquakes could come in 2020 and beyond as the nature of the market and who is allowed to play changes significantly.

Florida’s medical cannabis market is dominated by vertically integrated companies because vertical integration is legally mandated in the state. That requirement has meant that companies that can cultivate, process, and transport are the only parties that can sell legally to medical marijuana cardholders. The state market is highly swayed by regulatory shifts, as demonstrated this year when smokable cannabis became legal for the first time. With that change, nearly half of cannabis sold statewide is now the smokable kind. In a November report, the state Board of Medicine and the Board of Osteopathic Medicine said that 44% of patients are ordering smokable cannabis. And further change is coming.

Most importantly, the entrenchment of the vertically integrated MSOs is being challenged by large-scale petition efforts to allow small-scale cultivation of the plant. One effort aims to blow a hole in restrictions on how frequently applications for dispensary licenses are allowed and how close together retail sales locations can be. The industry-driven “Make It Legal Florida” campaign has poured millions of dollars into a statewide legalization effort, which could blow the gates down and significantly reduce the medical marijuana fraction of total statewide sales. Other grassroots efforts are moving along as well, in addition to pushes against legalization.

Florida’s MMTC (medical marijuana treatment center) industry is state-regulated and has several public companies involved, all of them traded on the Canadian Securities Exchange and/or OTC Markets. 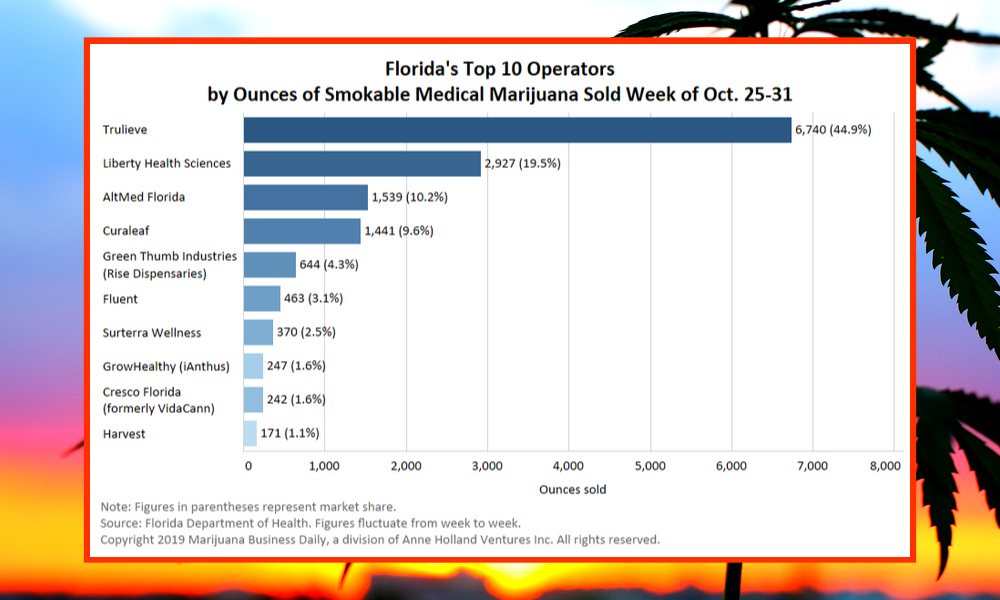 Trulieve, based in the Florida state capital Tallahassee, beat Wall Street’s expectations after it reported earnings this week announcing that its Q3 revenue of $70.7 million increased 22% quarter over quarter and 150% over Q3 2018. The company also announced adjusted EBITDA of $36.9 million and net income of $60.2 million for the third quarter, both numbers also besting analysts forecasts.

Trulieve has operations up the East Coast in Massachusetts and Connecticut as well as in California, but it draws its real heat from its home state of Florida. Trulieve has forty dispensing locations in Florida according to the latest state statistics from the Florida Health Office of Medical Marijuana Use. Other companies are well into the double digits of dispensaries in the Sunshine State, but in terms of smokable medical cannabis sold per week, nobody comes close to Trulieve’s 6,740 oz or 45% of the entire state of Florida’s market share.

Liberty Health Sciences (CSE: LHS) (OTCQX: LHSIF) comes in second behind Trulieve with 2,927 oz equalling an impressive 19.5% Florida market share. Operating mainly in southern Florida, Liberty may hedge itself against more widespread cultivation and distribution by smaller players with its Cannabis Education Centers. On the last day of October 2019, Liberty Health announced its Q2 2019 earnings which saw the company post consolidated net revenue of $10.6 million, an increase of nearly 380% over the same period in 2018 and 92.5% quarter over quarter. Liberty also reported net income for the second quarter of $22.8 million, a huge improvement over last year’s Q2 net loss of $5.6 million.

Among the other public companies following Trulieve and Liberty is Curaleaf Holdings (CSE: CURA) (OTCQX: CURLF) with its 1,441 oz and 9.6% share of the Florida medical cannabis market. Curaleaf also reported strong Q3 earnings this week posting pro forma revenue and managed revenue for the third quarter of $129 million and $73.2 million respectively. Managed revenue increased 201% year over year and 33% over Q2 2019 but narrowing missed Wall Street’s target of $76.8 million.

Green Thumb Industries (CSE: GTII) (OTCQX: GTBIF) came in right behind Curaleaf with its 4.3% market share and 644 oz per week sold. The company also released stellar third-quarter earnings this week, showing investors it knows how to make the register ring with revenue skyrocketing by nearly 300%. Green Thumb reported revenue for the quarter of $68 million easily beating analysts’ projection of $62.3 million. The company posted EBITDA and adjusted EBITDA for Q3 of $1.6 million and $14.1 million respectively.

After reviewing the numbers, there seems to be an obvious theme playing out with the top vertically integrated Florida cannabis operators. All of the top Florida MSOs have recently reported strong quarter over quarter earnings growth and analysts are projecting the trend to continue into 2020 and beyond.

Medical cannabis sales have been impressive but the real game-changer for these sunshine state operators could come in the form of recreational cannabis legalization. If the state can legalize adult-use cannabis in the future, these Florida operators stand to see their earnings soar.

Disclaimer: The Cannabis Investor owns a position in Liberty Health.