TRUL Stock Plummets Over 20% Before Rebounding 10% in Afternoon

Did the Short Report Create a Buying Opportunity?

Trulieve Cannabis (CSE: TRUL) (OTCQX: TCNNF) is facing some serious allegations after a new short-seller report by Grizzly Research was released this morning. The damning 26-page ‘short report’ accuses Trulieve of a laundry list of corrupt activities which include insider dealing, fraud and having ties to an ongoing FBI corruption investigation in North Florida.

The report accuses Trulieve and its insiders of being “deeply involved in ongoing FBI investigations” and mentions Trulieve CEO Kim Rivers’ husband, JT Burnette, as being “at the very center of the FBI probe.” Rivers and affiliated company’s are apparently mentioned in FBI subpoenas. The report states that Burnette is the “right-hand man of disgraced politician Scott Maddox” and has been indicted for his alleged involvement in a criminal enterprise that has been accused of falsifying statements and racketeering. Grizzly claims that Trulieve’s initial license approval in Florida “stinks of corruption and involved multiple undisclosed conflicts of interest.”

According to Grizzly’s research, JT Burnette is one of Trulieve’s main construction partners and his construction companies were named in a subpoena for being involved in a Florida scandal involving public funds. Grizzly claims that Rivers and Burnette are involved in a North Florida political crime ring that has been accused of obfuscated government money and dealing political favours.

In the words of Grizzly Research: “Trulieve lies about the nature of its lenders, and depicts some of them as third parties that we could trace back to insiders. Also, all but one lender used shell entities that show no other activities.”

The U.S. cannabis industry currently operates in an environment where access to traditional banking is extremely limited and in some cases non-existent. The report seems to indicate that Trulieve has allegedly been tapping into a political network with access to government loans and grants as a source of capital. Grizzly goes on to accuse Rivers of allegedly running “financial engineering schemes that potentially obfuscated state funds.”

One of Trulieve’s lenders is a company named Inkbridge which Grizzly stated is controlled by Kim Rivers. Inkbridge is apparently known for utilizing “government funds to finance ventures.” On top of that, Grizzly claims they have uncovered information indicating that “shady foreign individuals” have been trying to gain access to the Florida medical cannabis industry.

The short report then shifts its focus from the company’s FBI ties and financing activities to question the reason Trulieve has become the number one U.S. multi-state operator, its profitability. Trulieve’s stock has thoroughly outperformed the broad cannabis sector in a big way thanks to the company’s strong quarterly earnings. In the cannabis industry, very few companies have achieved profitability and Grizzly attempts to expose the underlying reasons for Trulieve’s financial success.

The report summed up the alleged reason that Trulieve was able to show profits on its recent quarterly earnings in the following statement:

“The company’s profitability is largely reliant on paper-gains, namely mark up on biological assets. Real cash flow has been in fact negative. We saw the company’s low-quality production, which makes us highly suspicious of the mark-ups that are far bigger than in for any other peer. The company had to borrow tiny amounts from insiders when it was supposedly swimming in cash.”

Grizzly then details its findings after it toured Trulieve’s cultivation and production facilities which included drone footage. The research firm claimed to conduct interviews with Trulieve employees and even some local residents. 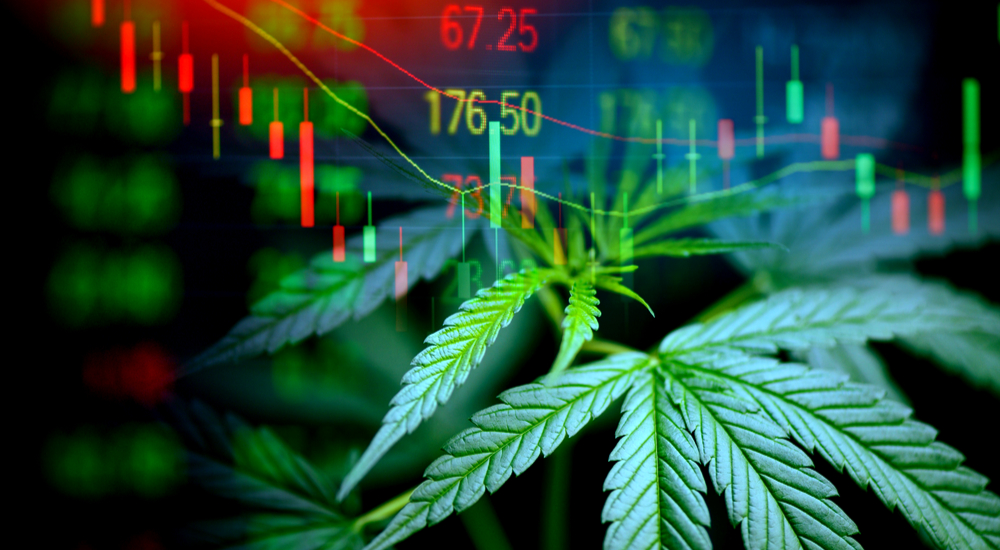 In response to this morning’s short report from Grizzly Research, Trulieve issued an official press release this afternoon addressing the serious allegations and informing its shareholders that the company was aware of the report. Trulieve stated that the short-seller report contained multiple false, slanderous and misleading statements about the company.

Trulieve’s CEO Kim Rivers issued the following statement addressing the allegations: “We ask that our investors be aware that the Report reflects the opinions of an acknowledged short seller, whose sole interest is in profiting from a decline in the price of the Company’s shares. I have full confidence in our management team and their abilities to continue to serve our customers without being distracted by these baseless allegations. Trulieve reserves all of its rights to take appropriate legal action against those responsible for the Report.”

The company addressed the question raised in the report surrounding its profitability saying that its earnings have been backed up by several reputable and well-respected analyst firms. Regarding its capital raising activities, Trulieve stated that the company has accurately communicated all relevant information to investors. In response to the claims made against its products, Trulieve says it stands by the quality of its cannabis products which the company claims have never been in question by its over 230,000 satisfied customers in the state of Florida.

In Trulieve’s opinion, today’s short report by Grizzly Research was a “disingenuous attempt to manipulate Trulieve’s stock price, and the Company is planning to pursue legal action against this outlet, which has no history or credibility in assessing cannabis companies.”

“Trulieve sells high-quality flower, cultivated in our indoor facilities, and was recently recognized by an award from the Cannabis Business Association of having the best flower in Florida. We stand behind the quality of our products and have a long-standing no-questions-asked return policy. Trulieve set a record for flower sales in Florida just last week, capturing over 51% of the market,” added Rivers.

As mentioned, the Trulieve short report is 26-pages long so we suggest reading it in its entirety after reading this article if you want all the information. Please keep in mind that most of the information in the report are simply allegations and that Grizzly Research is in the business of publishing negative information on public companies for the purpose of profiting on their short positions when the stock they are profiling declines in price. As Trulieve pointed out, Grizzly may not have much experience researching cannabis companies.

We’ve seen similar stories play out in the past with Aphria (TSX: APHA) (NYSE: APHA), Liberty Health (CSE: LHS) (OTCQX: LHSIF) and Cronos Group (TSX: CRON) (NASDAQ: CRON) and the major damage to their stocks was over with soon after the reports were published. In these examples, the short lived drop in share price created a strong buying opportunity for investors. With Trulieve announcing that they are planning to take legal action against Grizzly, it is likely that this will be the last short report on Trulieve published by the short-seller. Today’s decline on Trulieve’s stock could turn out to be another excellent buying opportunity for cannabis investors.

Shares of Trulieve’s CSE listed stock closed trading today at $13.67 per share, down 12.87% on the day. Most of the damage to Trulieve’s stock happened before 11 am this morning as panic sellers exaggerated the sell-off. At its peak, shares of TRUL were down as much as 23% before recovering and gaining back 10% during afternoon trading.

Cannabis investors should do their own research before buying or selling any stock and should not rely solely on any biased media publications. Trulieve could be a good buy the dip play and it’s certainly worth a closer look at these levels. 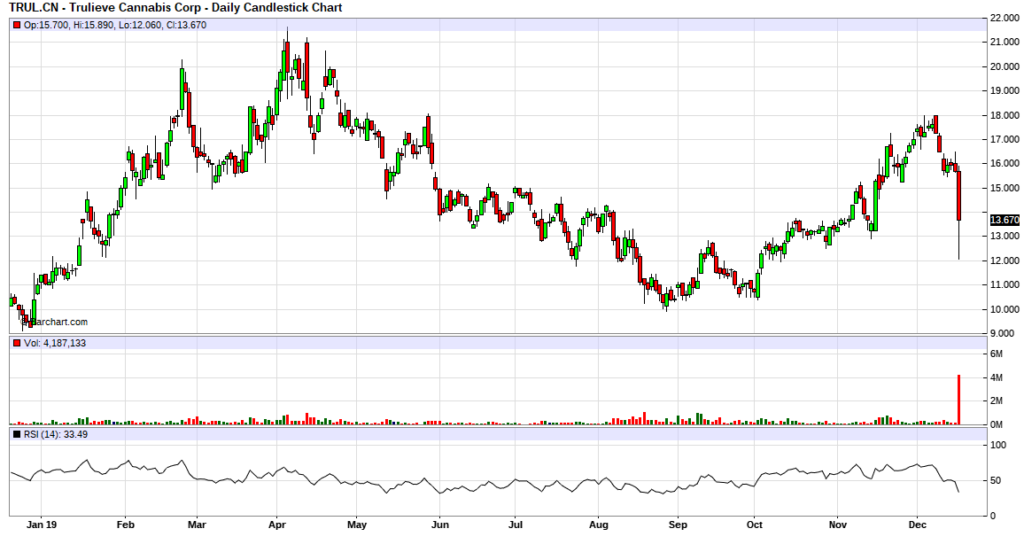