Based on RWB’s closing price of $0.59 on Friday, Zandberg’s target price implies a potential upside of 323.73%. The driving force behind PI Financial’s thesis is RWB’s position in the rapidly growing Michigan market.

Red White & Bloom holds an investment in PharmaCo, a leading Michigan cannabis player. RWB announced in late July that it exercised a call option to acquire PharmaCo, with the deal slated to close in late October, pending regulatory approval.

“We believe RWB is the best vehicle to invest in the Michigan cannabis market. Thus far, in 2020, Michigan has reported the fastest growing cannabis market in the U.S. The states of Illinois (medical and adult-use) and Florida (medical only) have typically been framed as the best markets in 2020, but Michigan eclipses both of those markets in terms of both growth rate of sales as well as overall size,” stated Zandberg.

According to the analyst’s estimates, the Great Lakes State cannabis market is growing at an annualized rate of 566% in 2020. Zandberg projects that PharmaCo’s ten operational dispensaries could generate trailing revenue over the past 12 months of approximately $70 million. Zandberg added that RWB’s plan to rebrand its Michigan stores as High Times dispensaries should create “instant brand recognition.”

“Even before re-branding its dispensaries under the High Times brand and coordinating its sales efforts, RWB revenue per dispensary is slightly above the average of the top-performing MSOs. Given our bullishness of the Michigan market, we believe RWB can be at or near the top of this list in the future,” added Zandberg.

Zandberg reiterated that he remains bullish on the U.S. cannabis space as a whole and foresees potential regulatory reform as a catalyst for American Pot Stocks. The analyst also described the two main MSO categories as it relates to their business models.

Companies such as Curaleaf (CSE: CURA) (OTCQX: CURLF) operate using a “wide-angle” approach with the goal of expanding into as many states as possible. The opposite strategy, which firms like Trulieve (CSE: TRUL) (OTCQX: TCNNF) are employing in Florida and RWB in Michigan, involves a “narrow-angle” approach, with the goal of acquiring a large market share in select states and acting more like “Super State Operators” than multi-state operators. According to RWB’s investor presentation, PharmaCo already controls a dominating 22% share of the Michigan cannabis market.

“We’re very disciplined in what we’re doing. We call ourselves Super State Operators. We’re not a multi-state operator. We’re super state, meaning that we go in [states] with a big footprint, and we dominate wherever we go,” explained RWB Chairman and CEO Brad Rogers in an interview with TraderTV Live this summer.

The analyst concluded by saying:

In addition to working towards closing the PharmaCo deal, RWB recently closed another massive acquisition in Platinum Vape (PV) as well as completed a $25 million bought deal financing. The bought deal offering included the full exercise of the over-allotment option. Platinum Vape is a leading cannabis purveyor with a full line of premium products sold at over 750 retailers throughout Michigan, California and Oklahoma.

RWB announced earlier this month that PV is expanding into the highly-promising Arizona market. Arizona is currently a medical marijuana state but could be on the verge of becoming an adult-use market if the state’s Proposition 207 is approved at the November 3, 2020 election.

PV is an incredibly impressive company both from an operational and financial standpoint, with the company boasting annualized revenues of more than USD $75 million with EBITDA of approximately 25% – 30%. The PV brand also has a stellar 84% approval rating on the popular website WeedMaps.

Since PI Financial launch coverage on Red White & Bloom, shares of RWB have rallied substantially, with the research and bullish price target arguably catalyzing the stock’s reversal. After bottoming at $0.485 on October 6, 2020, RWB has climbed over 34% in the past week. 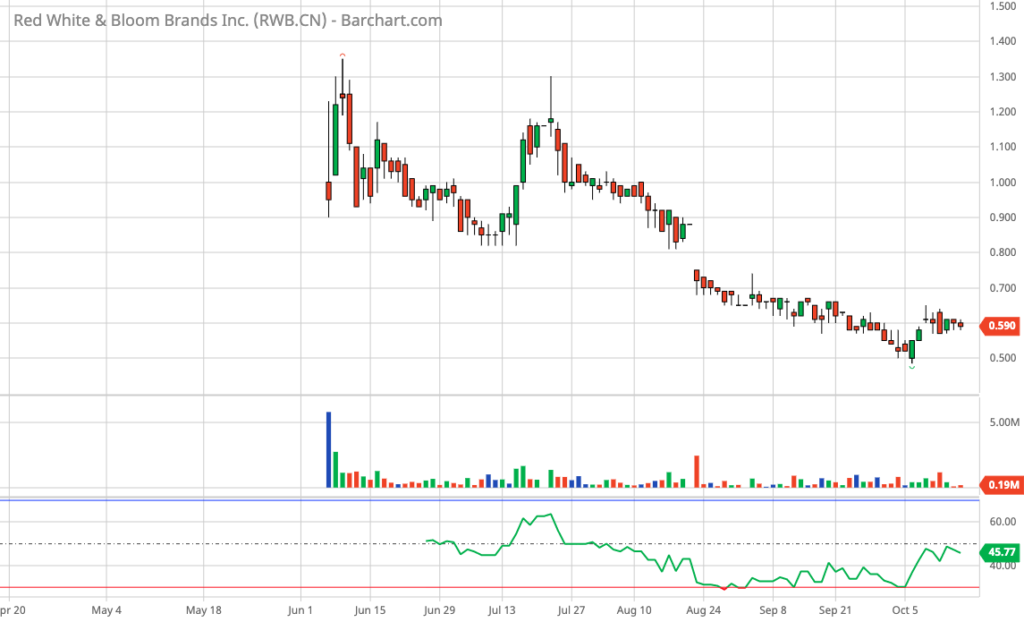