Hip-hop star A$AP Rocky made global headlines in July because of an altercation he and his entourage got into in Sweden. Hundreds of thousands of fans are rallying to his support, and so are high powered politicians who might not seem to be the biggest rap connoisseurs–even President Trump is joining the calls for Stockholm to relax. A$AP Rocky was arrested for aggravated assault, despite what video shows to be circumstances that explain the scuffle.

Like many other rappers, A$AP Rocky’s fortunes are not tied up only in lyrics. He and his peers have inked lucrative deals with companies who want to build their global brands in connection with music, culture, and the bright if sometimes controversial personalities of urban music artists. More and more, those global brands are cannabis-focused.

Weed and rap music have been connected in the popular consciousness for decades. While some of the earliest rappers used names like Kurtis Blow and referred to a controlled substance which will not be legal anytime soon, platinum-selling MC‘s like Dr. Dre brought us chart-topping cannabis opuses bearing the green weed leaf such as The Chronic, and countless rappers, songs, and albums honored the plant and countless ways to consume it.

The 1993 the smash hit by Cypress Hill “Insane in the Brain” even referred to the illegality of weed with the line, “cops come and try to snatch my crops.” Assistants to rappers have long been known as “weed carriers,” because no star wanted to be caught with an illegal bag. Over the years, rappers played an important role in the advancement of cultural interest and acceptance of marijuana, and many of them have taken their place among the business leaders of the burgeoning industry.

Rap made the transition from being the music of the streets to being the soundtrack of America and beyond. Now that cannabis is going mainstream, let’s take a look at the top ten hip hop artists who are capitalizing on the green rush. 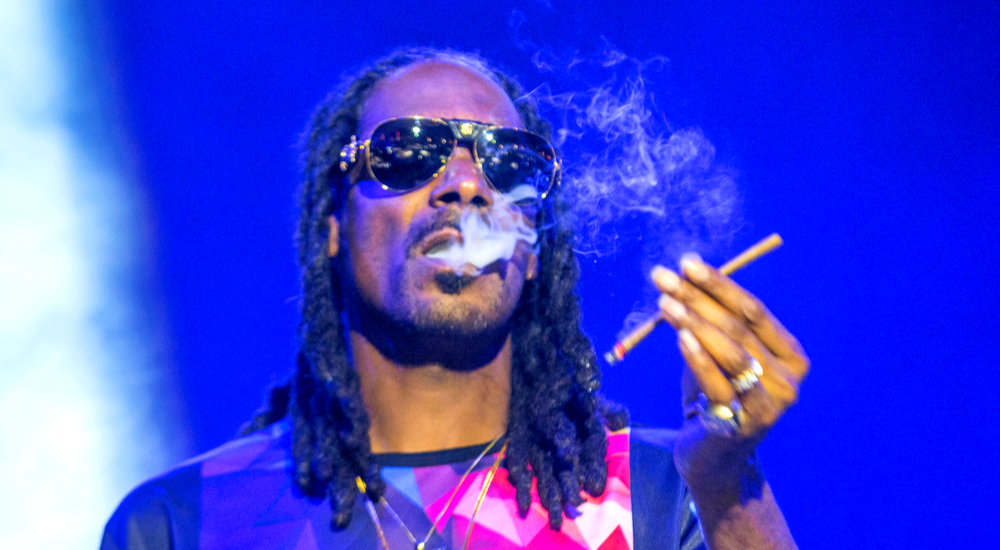 Jay-Z made headlines in July when news broke of his deal with Caliva, a large private cannabis company based in California. As Beyonce’s husband and Roc-A-Wear CEO, Jay-Z went from songs like “Streets is Watchin’” to seeing investors keeping an eye on his moves. In addition to capitalizing on the green rush, Jay-Z plans to create opportunities for those hurt by the prohibition of cannabis. If you weren’t already convinced that cannabis has gone mainstream — you will be now that Jay-Z has entered the game.

Wiz Khalifa has been known for his rhyme style as well as eye-popping tattoos and stunning supermodel girlfriends. He’s also trying to show that he’s a wiz in the weed biz through his deal with Supreme Cannabis (TSX: FIRE) (OTCQX: SPRWF), which is promoting the custom Khalifa Kush recreational-focused cannabis oil line in Canada. Wiz Khalifa is looking to reign supreme in the cannabis industry.

Snoop Dogg started out as Dr. Dre’s protege, but now he’s the one with the major brand value for someone else to leverage. That’s exactly the angle that Canopy Growth (TSX: WEED) (NYSE: CGC) is taking with the Long Beach California based rap icon. Flipping the script even further, Snoop gave Martha Stewart the hookup with Canopy for her own deal with the company.

Post Malone can sing and play guitar in addition to rapping, and besides that he has also gotten into the weed business with his own Shaboink brand. He’s got a strategic partnership agreement with Icon Farms for his pre-rolled products, giving him access to an older tobacco industry company with hemp cultivation operations.

Back to the man currently in the Stockholm lock-up, A$AP Rocky, born Rakim Meyers, made Billboard news for his partnership with KandyPens called Flacko Jodye, getting him into the vape market. He has teamed up with Mercedes Benz and Courvoisier among other brands, so it’s not much of a stretch to see him transitioning into the weed business–if he can get back home a free man soon.

The megastar trap artist recent got involved in the cannabis industry and is a partner and brand ambassador for the pot brand Smoke Unhappy. The company was launched by Kamil Mizstal and Larry Chachko and sells a wide range of cannabis-related THC and CBD products.

Grammy-winning hip hop artist, businessman and star of the online series ‘Most Expensivest‘ does not keep his love for cannabis a secret. 2 Chainz got his foray into the budding cannabis industry via his marijuana line GAS Cannabis Co. which currently sells flower and pre-rolls. He also has plans to lauch a line of edibles in the near future.

Well known Rapper The Game hit the cannabis scene recently and unveiled his line of premium flower called Trees by Game. Besides having his own strain, The Game was the first celebrity to become an official partner at a dispensary called The Reserve which is located in Santa Ana, California.

The late, great rapper Nipsey Hussle (RIP), has a strain of cannabis that was inspired by his famous Marathon clothing brand called Marathon OG. The cultural icon was the unfortunate victim of a shooting in his home town of Crenshaw earlier this year.

Soulja Boy has never been one to hide his affection for marijuana. The rapper has two of his own cannabis strains called King Soulja OG  Marilyn Monroe OG.