Transaction Expected to be Tax-Efficient for Privateer Stockholders

NANAIMO, British Columbia–(BUSINESS WIRE)–Tilray, Inc. (NASDAQ: TLRY), a global leader in cannabis research, cultivation, production, and distribution, today announced that it has signed a non-binding Letter of Intent (“LOI”) with its largest stockholder Privateer Holdings, Inc. (“Privateer”) for a transaction that will extend the lock-up on and provide for the orderly release of the 75 million Tilray shares held by Privateer to Privateer’s equity holders. These shares currently represent 77 percent of Tilray’s total shares outstanding.

Under the terms of the LOI, the parties will effect a downstream merger of Privateer with and into a wholly-owned subsidiary of Tilray, with the Tilray subsidiary surviving the merger, and the issuance by Tilray to Privateer stockholders of newly issued and registered shares of Tilray common stock in an aggregate amount equal to the number of Tilray common shares currently held by Privateer. All Tilray shares held by Privateer and all outstanding Privateer common stock will be canceled upon consummation of the merger. Tilray was originally incubated and financed by Privateer as one of its wholly-owned operating subsidiaries before closing a Series A round of capital in February 2018 and then becoming the first cannabis producer to complete an Initial Public Offering (IPO) on a major U.S. stock exchange in July 2018. Earlier this year, Privateer distributed its ownership of its three other operating subsidiaries unrelated to Tilray directly to Privateer stockholders, leaving no material assets in Privateer other than the 75 million shares it currently holds in Tilray.

Pursuant to the terms of the proposed transaction, the shares of Tilray stock distributed in the merger would be subject to a lock-up allowing for the sale of such shares only under certain circumstances over a two-year period. During the first year following the closing of the merger, shares will be released only pursuant to marketed offerings and/or block trades to institutional investors or via stock sales to strategic investors, all of which would be arranged at the sole discretion of Tilray. The remaining shares will be subject to a staggered release over the course of the second year following closing. In addition, Privateer has agreed in the LOI to a lock-up on its Tilray shares during the negotiating period for the definitive merger agreement.

Mark Castaneda, Chief Financial Officer of Tilray, said: “We appreciate the long-term confidence that Privateer has in the Tilray business and we look forward to having their investors as part of our stockholder base. We believe this transaction will give Tilray greater control and operating flexibility, while allowing us to effectively manage our public float.”

Michael Blue, Managing Partner of Privateer, said: “We believe this structure will maximize overall returns for our visionary investors in a tax-efficient manner while giving Tilray the operating flexibility it needs to continue to be a leader in the rapidly emerging global cannabis industry.”

Tilray is a global pioneer in the research, cultivation, production and distribution of cannabis and cannabinoids currently serving tens of thousands of patients and consumers in twelve countries spanning five continents. 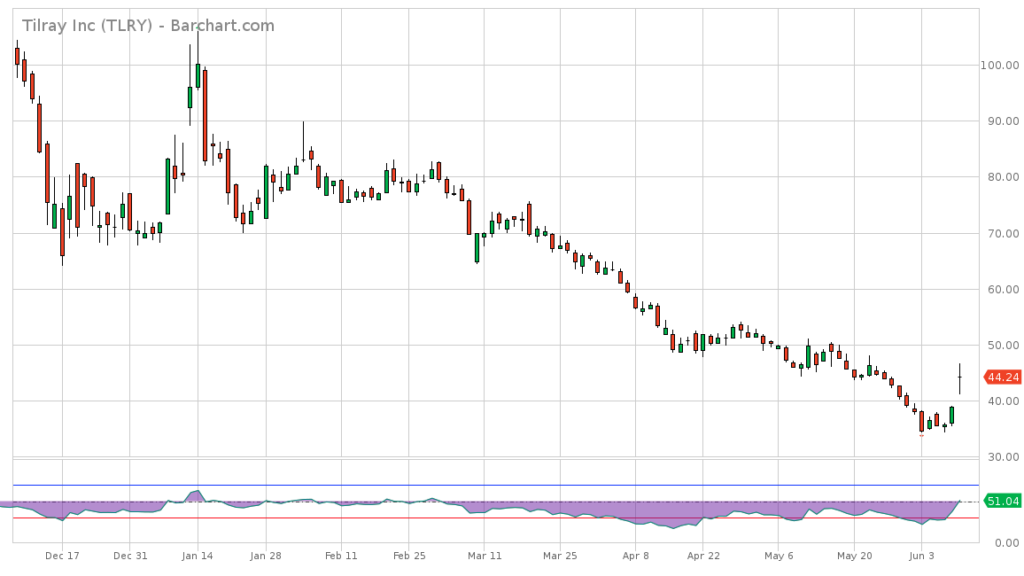 Technical Analysis for TLRY by TradingView