The Psychedelics Industry is Beginning to Heat Up, Giving Cannabis Investors an Eerie Sense of Déja Vu

The cannabis sector and financial markets as a whole have seen better days. It’s been a rough start to the 2020 year as cannabis stocks continue to struggle to gain their footing. Despite an optimistic start to the new year, pot stocks have begun to slide once again.

Up until just a couple of weeks ago, the overall North American stock market was on fire, setting multiple new all-time highs in February and looked poised for another record-breaking year. Just when things looked like they couldn’t get any better for investors, the Coronavirus epidemic entered the picture causing massive disruptions to the global supply chain and sending the stock market into free fall.

In the United States, the Dow Jones Industrial Average (DJIA) and S&P 500 Index (SPX) had an extremely volatile past two weeks, which included the DOW setting a new record for the fastest 10% correction in the history of the stock market. Markets have bounced back sharply since the DOW hit a low of 24,681 on February 28. This past Wednesday, the DOW recorded its second-best single-day point gain ever after soaring 1,173.45 points. While there is still plenty of uncertainty surrounding the Coronavirus issue, markets appear to be stabilizing, but we’re not out of the woods yet. It could be another choppy few months ahead.

While all this carnage is taking place in the global financial markets, an emerging new sector has actually been on the rise. For those that are unaware, the newly formed psychedelics industry and the handful of stocks in it, have bucked the trend in a big way. Cannabis investors that were around during the pot sector’s early days must undoubtedly be experiencing a case of déja vu as psychedelic stocks begin what could become the start of a significant gold rush in the new industry chock-full of similarities.

Until then, it seems cannabis investors, especially ones that missed out of the last bull run, have turned their attention to the new and promising psychedelics sector. Psychedelic substances such as Psilocybin (Magic Mushrooms), Ayahuasca, Peyote, Ketamine, DMT, LSD and MDMA are not legal for recreational purposes in North America, but like the early days of the legal marijuana industry, a growing psychedelics reform trend has been slowly gaining momentum in states such as California, Colorado, Vermont and Washington D.C.

While recreational psychedelics use is illegal in Canada and America for the time being, many companies are investing heavily on the medical side of the industry and are moving forward with a range of federally-authorized clinical trials. Various companies are preparing clinical studies intending to create medicinal psychedelics to treat a variety of conditions such as anxiety, depression, addiction, ADHD and PTSD. The early promise shown on the medical side of the sector has caught the attention of some very high profile investors from Wall Street, Bay Street and even Silicon Valley. This group of investors includes the likes of Kevin O’Leary and the founder and former CEO of Canopy Growth (TSX: WEED) (NYSE: CGC) (FRA: 11L1), Bruce Linton.

The psychedelics industry is in its infancy, and because it’s so early in the game, there are only a handful of publically traded companies at this time, two of which just IPO’d within the last week. We expect there to be many more IPOs in 2020, but until more companies enter the public markets, psychedelic stocks like Champignon Brands (CSE: SHRM) and MindMed (NEO: MMED) will be in very high demand. Let’s compare SHRM and MMED’s first week of trading to see how the two stacked up and which stock came out on top. 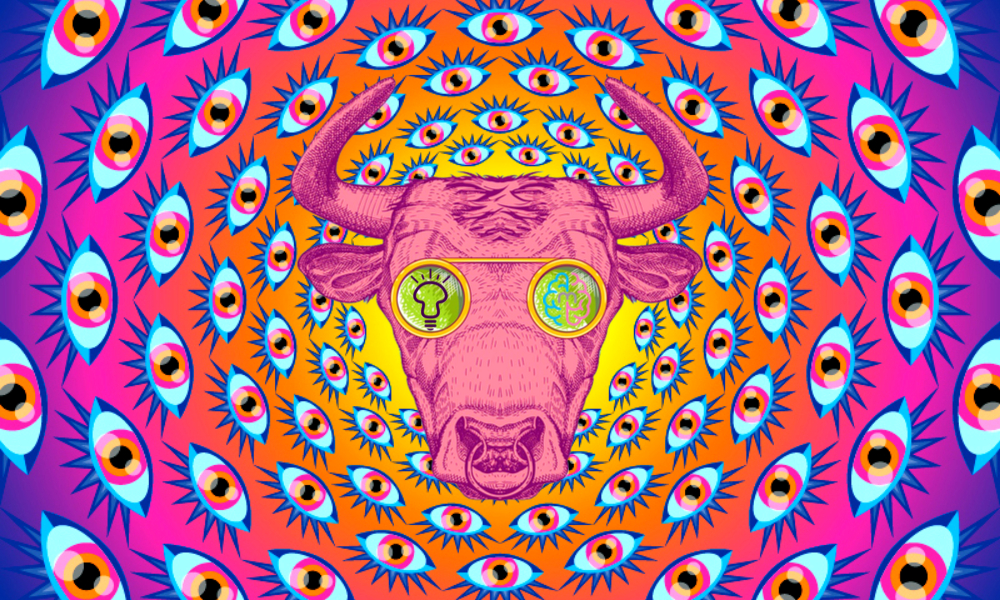 This past Tuesday, MindMed made history becoming the first psychedelics pharmaceutical firm to go public following the company’s historic IPO on the Canadian NEO Exchange. Before going public, MindMed raised $24 million in a pre IPO financing round, which featured O’Leary and Linton.

“Psychedelics have been under-researched and stigmatized by society. As an investor, I am attracted to MindMed because they are solving health problems through federally-authorized clinical trials, and have no interest in recreational use,” said O’Leary.

MindMed is currently preparing two separate phase II clinical trials; one focused on ADHD using LSD micro-dosing and the other on opioid addiction via the company’s ibogaine derived molecule 18-MC. MindMed’s 18-MC will utilize a non-hallucinogenic version of the ibogaine compound and is the company’s lead drug development program.

Now that MindMed is public, the company has the luxury of having access to institutional capital that will allow the firm to build out its pipeline of clinical trials and further ramp up its operations.

Shares of MMED opened its inaugural trading session on March 3 at $0.60 per share and over the next two days climbed as much as 65% reaching a high of $0.99. MMED stock has since pulled back closing Friday at $0.55, down 8.33% from its day one open. 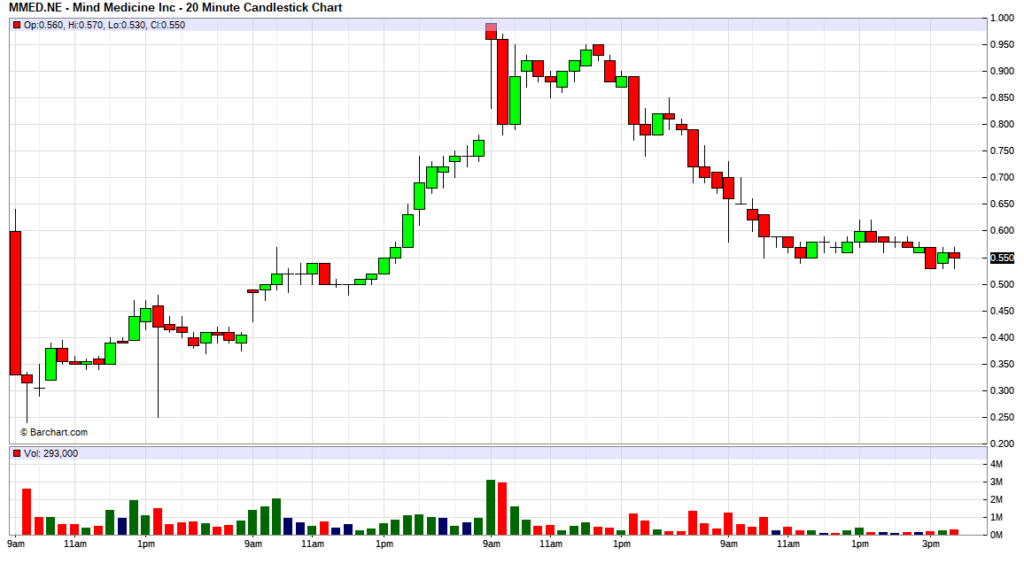 One day before MindMed’s IPO, Champignon Brands officially became the first new psychedelics company to commence trading in 2020. The company closed its $2.85 million IPO in February, which was led by PI Financial. Champignon specializes in the formulation of mushroom-infused consumer packaged goods (CPG) and uses a research-driven approach in its quest to promote holistic health and wellness.

Champignon will remain focused on growing its mushroom-infused portfolio and e-commerce infrastructure for the remainder of Q1. While the mushroom portfolio is a strong business operating in a global functional food market expected to reach $34 billion by 2024, it only makes up a portion of the company’s ambitious 2020 plans. Those plans include the assembly of what Champignon is calling “the most compelling IP portfolio, clinical pipeline and drug development platform in the psychedelics space.”

Within the first three months of laboratory experiments, Champignon intends to biosynthesize psilocybin successfully. The company’s goal from here is to optimize and scale its production of pharmaceutical-grade psilocybin, which it can use in clinical settings.

“We are dedicated to transforming the health and wellness industry via the infusion of our proprietary blend of medicinal mushrooms. We’ve been assembling a dedicated roster of mycologists and health and wellness professionals to formulate several distinctive lines of premium fungi extracts. The overall product portfolio is tailored for conscious consumers looking to support mental health and bolster cognitive performance through medicinal mushroom-based products. We believe that we are only scratching the surface when it comes to unlocking the benefits hidden in medicinal mushrooms,” said Champignon Brands CEO Gareth Birdsall.

Champignon Brands recently informed investors that it intends to list its stock on the U.S. OTC Markets Exchange and Germany’s Frankfurt Stock Exchange as soon as practicable. “Champignon’s anticipated tri-listing will afford its current shareholders pre-eminent liquidity, all while contributing to a genuine global presence through improved accessibility for international capital flows,” stated the company via press release.

Despite the extra media attention surrounding MindMed’s IPO thanks to the high profile investors backing the company, MMED stock was outperformed by Champignon Brands in the opening week of trading. While MMED finished the week down more than 8%, SHRM performed exceptionally well, closing its first week of trading up over 79%.

Champignon has a much more attractive share structure compared to MindMed. SHRM’s smaller float is a definite advantage and should make the stock more appealing to investors. According to their investor decks, SHRM has an outstanding share count of only 38,536,668, while MMED has over 6.5 times more shares outstanding at 255,431,251.

To sum things up, the battle between new psychedelic IPO’s Champignon Brands and MindMed wasn’t even close. Investors clearly favoured SHRM in the opening week, as evidenced by the price action of both stocks. We expect this trend to continue throughout 2020 as Champignon Brands continues to execute on its exciting business plan. 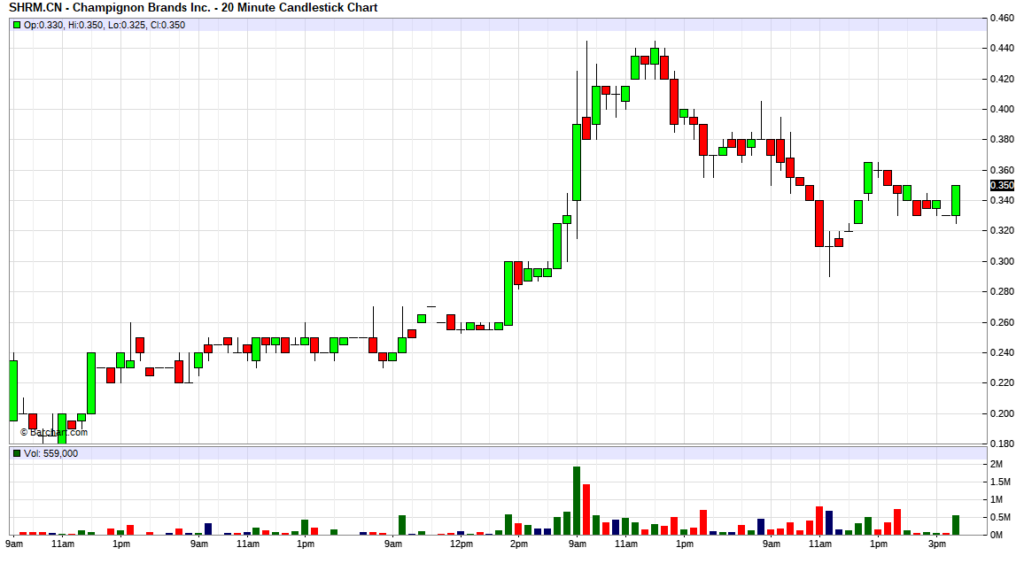