Michigan officially opened the doors to its recreational cannabis market this past Sunday and the demand from consumers was evident. Michiganders and residents from nearby states camped out overnight on the eve of adult-use sales commencing in Michigan with some dispensary lineups stretching nearly 3 blocks. Although the number of retail stores in Michigan was limited on day one, three Ann Arbor dispensaries racked up $220,000 in total sales on Sunday. Experts are projecting the Great Lake State’s adult-use market could serve as much as 1.5 million consumers and generate annual sales of nearly $2 billion once the market matures.

With Michigan now open for business, we turn our attention to Illinois as we continue with our coverage of U.S. states where big changes are in the works. Home to the country’s third-largest city Chicago and the number three television market in the nation, Illinois is also the Land of Lincoln and likes to stand for freedom. So, let’s take a look at what the state’s voters and legislators are doing to liberate cannabis consumers and drive profits for certain companies active in the state.

At 6 am on New Year’s Day 2020, recreational cannabis for adults 21 and over will be legal in Illinois as the result of a 66 to 47 vote in the state House of Representatives on May 31, 2018. That made Illinois the 11th state to legalize adult-use cannabis and the first of the eleven states to have legalized via legislation rather than a ballot measure. Governor J.B. Pritzker has touted legalization as an opportunity for equity, justice, and economic opportunity in communities across the state. Half a billion bucks in expected additional tax revenue for legally sold cannabis did not hurt the case for legalization either. Illinois will join Michigan, Alaska, California, Colorado, Maine, Massachusetts, Oregon, Nevada, Vermont, Washington and the District of Columbia as the other states with recreational sales.

There are details to legalization that are relevant to consumers and companies that hope to cater to them. Adults of legal drinking age i.e. 21 and over will be able to legally purchase and possess no more than 30 grams of flower, 500 mg of THC edibles, or 5 grams of cannabis concentrate. People from outside the state—114 million visitors came in 2018, according to state figures—can only buy half the Illinois limit for residents and of course, must adhere to federal laws prohibiting movement across borders and their own home state laws. Illinois borders Missouri, Wisconsin, Kentucky, Indiana, Michigan, and Iowa.

And even though legalization passed through the legislature at the state level, cities, towns, and municipalities are permitted to decide for themselves if they want to allow recreational sales in their limits. Some say yes; some say no.

The state has been approving more dispensaries in jurisdictions that gave the nod, showing that Illinois is serious about setting up a legal market that does not drag like so many others we’ve seen, including Canada. Regulators just approved several more recreational marijuana dispensaries, giving the state 29 in total and six in Chicago as of late November. The Illinois Department of Financial and Professional Regulation, which controls licensing, says that recreational dispensary licenses will soon be extended beyond the current group of shops that were already selling medicinal cannabis. 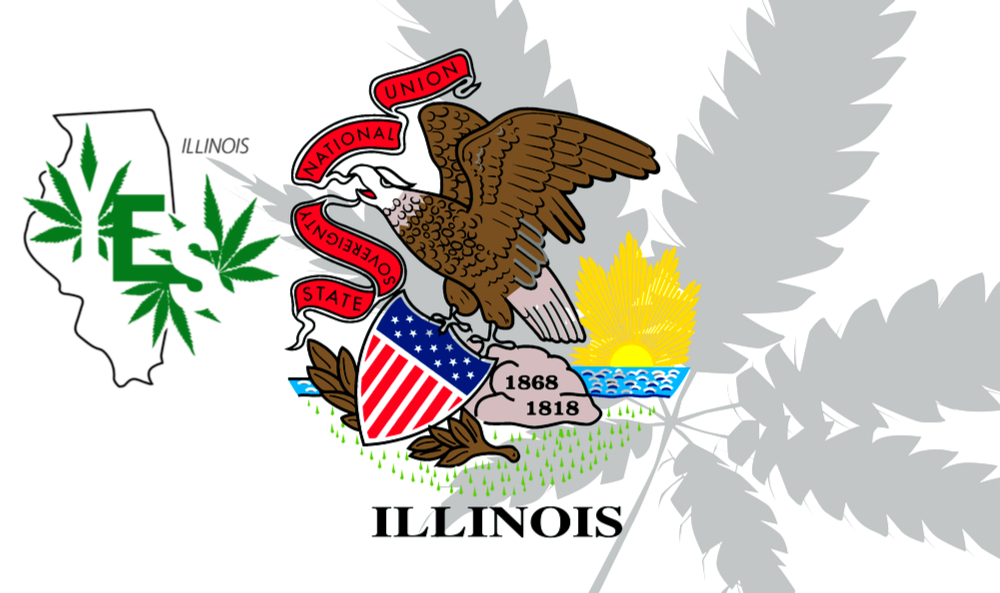 Red White & Bloom (CSE: RWB – IPO Soon), with primary operations in Michigan, is eager to build upon its presence in the neighbouring state of Illinois. RWB’s executive experience is significant in CEO Brad Rogers, who made the media rounds recently on the Midas Letter RAW Podcast, promising to help “Make America Dope Again” and also rallied investors in Illinois at the major Benzinga Cannabis Capital Conference in Chicago, the heart of the Illinois action.

In Illinois, Red White & Bloom has its 3.6 million sq ft indoor CBD cultivation facility in operation and the company has already harvested 60 tons of top of the line CBD flower which it plans to use in the creation of high margin branded cannabis products. Once the Illinois facility is running at full capacity, Rogers expects it to bring in $150 million – $200 million per year in sales. The Illinois sales will go nicely with RWB’s estimated 2020 sales of $250 million – $300 million in Michigan. Currently, RWB is already generating over $100 million annually in the Great Lakes State.

Chicago’s own Cresco Labs (CSE: CL) (OTCQX: CRLBF) came out with its earnings on November 26, announcing 184% year-over-year and 21% quarter-over-quarter revenue growth for Q3 2019. The company fell short of expectations but analysts were impressed with the company’s continued organic growth and signs of profitability. The vertically integrated multi-state operator (MSO) is working to build its importance in the value chain not only through its own production but also by watching an incubator to support the growth of other smaller companies in the state cannabis industry. Cresco already produces a quarter of the legal medicinal cannabis produced in Illinois.

Cresco is the market leader in Illinois with a 25% share of the market and in mid-November, the company secured two recreational retail licenses in Chicago’s prestigious Central District. Cresco now has 8 retail stores in Illinois, 5 in operations and 3 set to open soon. In total, Cresco has operations in 11 states with 24 production facilities and 21 operational dispensaries. The company also holds 31 retail licenses. Analysts believe Cresco will generate fiscal 2019 revenue of $131 million and fiscal 2020 revenue of $592 million. Beacon Securities analyst Russell Stanley currently has a BUY rating on Cresco stock and a price target of $24 per share. This price target implies an upside of 269% from the current market price.

Analyst Robert Fagan of GMP Securities currently has a BUY rating and a $32 price target on shares of GTII. The $32 price target on GTII stock implies an upside of 183% from current levels. Analysts expect GTI to continue on its upward trajectory and predict the company will report full-year fiscal 2019 revenue and EBITDA of $217.5 million and $35.3 million respectively. Looking ahead to 2020, analysts are forecasting EBITDA of $164.6 million on revenue of $483.2 million for the full-year fiscal 2020.