TORONTO, May 30, 2019 /PRNewswire/ – The Green Organic Dutchman Holdings Ltd. (TSX: TGOD) (OTCQX: TGODF) is pleased to announce, further to its news release of February 6, 2019, that it will effect on June 3, 2019 (the “Distribution Date“) the distribution of unit purchase warrants (“SpinCo Unit Warrants“) of TGOD Acquisition Corp. (“SpinCo“) to all registered TGOD shareholders of record as of January 31, 2019 (the “Distribution Record Date“) who elected to receive the SpinCo Unit Warrants (the “Distribution“) under its previously announced plan of arrangement with SpinCo (the “Arrangement“).

SpinCo is also pleased to announce the appointment of Mr. Daniel Brody as Chief Executive Officer of SpinCo. Mr. Brody will transition from his current role of Vice President, Investor Relations at TGOD to replace Mr. David Doherty. SpinCo would like to thank Mr. Doherty for his contribution to SpinCo during his tenure.

The SpinCo Unit Warrants to be distributed pursuant to the Distribution will not be registered under the laws of any foreign jurisdiction, including the United States Securities Act of 1933, as amended (the “U.S. Securities Act“). Consequently, NO SPINCO UNIT WARRANTS WILL BE DELIVERED TO ANY REGISTERED OR BENEFICIAL HOLDER OF TGOD SHARES WHO IS, OR WHO APPEARS TO TGOD OR COMPUTERSHARE TRUST COMPANY OF CANADA, AS CUSTODIAN (THE “CUSTODIAN“) TO BE, AN INDIVIDUAL OR ENTITY THAT QUALIFIES AS A U.S. PERSON UNDER APPLICABLE U.S. SECURITIES LAWS (COLLECTIVELY, “U.S. SHAREHOLDERS“). Such SpinCo Unit Warrants will be delivered by TGOD to the Custodian for sale by the Custodian on behalf of all U.S. Shareholders and U.S. Shareholders (and in the case of U.S. Beneficial TGOD Shareholders, electing U.S. Shareholders) will receive from the Custodian their pro rata share of the cash proceeds from the sale of such SpinCo Unit Warrants, less any commissions, expenses and any applicable withholding taxes. It is anticipated that the SpinCo Unit Warrants will have nominal market value.

For additional details respecting the Distribution, the Arrangement and the election process, please refer to the management information circular of the Company dated November 7, 2018, the Company’s news release of January 24, 2019 and the Election Form, a copy of each of which is available under the Company’s SEDAR profile at www.sedar.com, visit the Frequently Asked Questions section here, or contact TGOD’s investor relations team at: invest@tgod.ca or (416) 900-7621.

SpinCo is an investment company guided by an investment policy primarily focused on investments in the cannabis industry in Canada and internationally. SpinCo’s investments may include the acquisition of equity, debt or other securities of publicly traded or private companies or other entities, financing in exchange for pre-determined royalties or distributions and the acquisition of all or part of one or more businesses, portfolios or other assets, in each case as SpinCo believes will enhance value for the shareholders of SpinCo in the long term. SpinCo’s board of directors and management team have considerable financial, mergers and acquisitions and cannabis industry experience and will consist of Danny Brody, Chief Executive Officer, Nick Demare, Chief Financial Officer, and Jeff Scott, Director.

The Green Organic Dutchman Holdings Ltd. (TSX: TGOD) (US: TGODF) is a publicly traded, premium global organic cannabis company, with operations focused on medical cannabis markets in Canada, Europe, the Caribbean and Latin America, as well as the Canadian adult-use market. TGOD also has organic hemp CBD oil operations in Canada, and through its wholly owned subsidiary HemPoland distributes premium hemp CBD oil in the EU. The Company grows high quality, organic cannabis with sustainable, all-natural principles. TGOD’s products are laboratory tested to ensure patients have access to a standardized, safe and consistent product. TGOD has a planned capacity of 219,000 kgs and is building 1,643,600 sq. ft. of cultivation and processing facilities across Ontario, Quebec, Jamaica and Denmark.

TGOD’s Common Shares and warrants issued under the indenture dated November 1, 2017 trade on the TSX under the symbol “TGOD” and “TGOD.WT”, respectively. 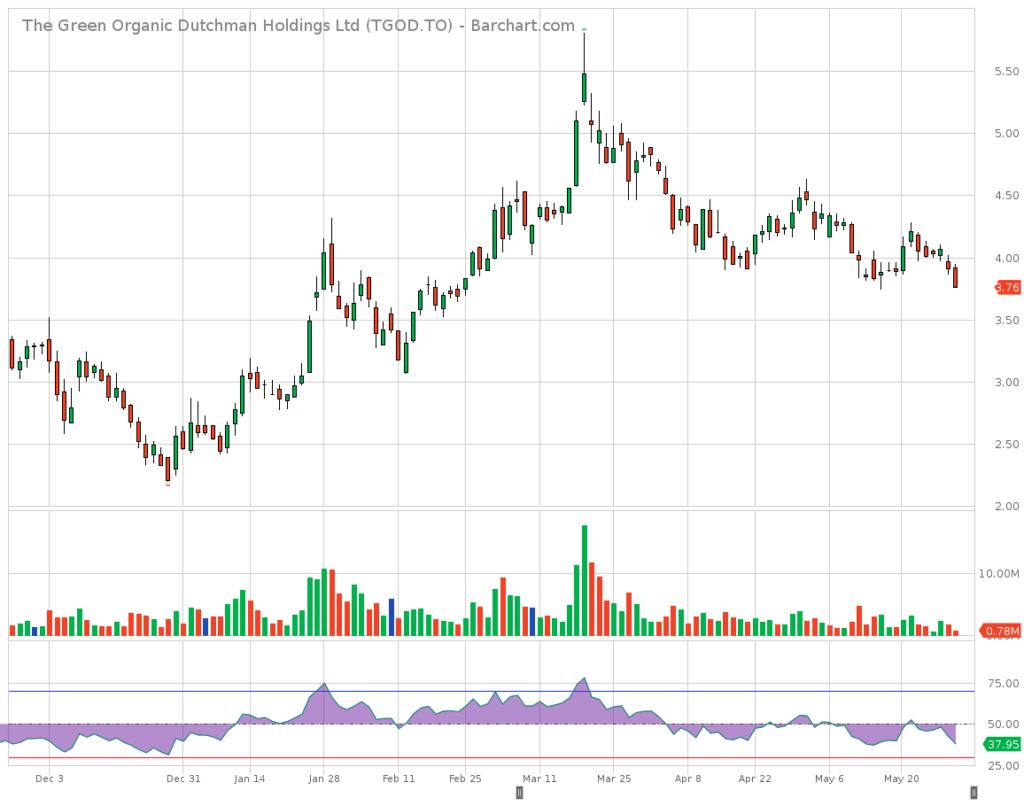 Technical Analysis for TGOD by TradingView