“Our Company is pleased with the results of our third quarter financials and with the progress made thus far on our strategic priorities for the 2019 calendar year. This quarter saw a marked increase in revenue on both an annual and quarter-over-quarter basis. This revenue growth was driven by an increase in our capacity at the 7ACRES facility, a ramping up of our product packaging capabilities and, we believe, consumer preference for high-quality cannabis,” said Navdeep Dhaliwal, CEO of The Supreme Cannabis Company, Inc. “As we report the Company’s third quarter of fiscal 2019, we reflect on our first six months of legal cannabis sales in Canada. While Supreme Cannabis was originally viewed as a contrarian for taking a consumer-oriented approach to the cannabis market, 7ACRES’ strong consumer feedback, status as a top-ten revenue producer in the industry and recognition as a coast-to-coast award-winning premium brand affirms that our approach to the Canadian cannabis market is winning with the people who will drive revenue: consumers.”

“Our strong foundation built on cultivation IP, genetics and an excellent reputation among consumers leaves us well positioned to enter new and exciting product segments where we have a proprietary advantage over our competition. We approach our year end with the senior leadership team, strategic agreements and brands in place to drive growth into fiscal 2020,” Mr. Dhaliwal added.

During the quarter, 7ACRES offset industry-wide consumer packaging challenges through its wholesale supply agreements. When selling dried flower to wholesale buyers, 7ACRES benefited from low-cost, bulk-packaging and industry demand for additional supply. The largest of its wholesale agreements is with Tilray Canada Ltd. (NASDAQ: TLRY) (“Tilray”). In the quarter, 7ACRES continued to fulfill its supply agreement with Tilray at prices and volumes consistent with the original announcement.

Over the quarter, the Company worked with MediPharm Labs Inc. (TSXV: LABS) (“MediPharm”), a leading cannabis extractor, to produce its premium oil products line. As announced in November 2018, under MediPharm and Supreme Cannabis’ three-year contract, 7ACRES will supply a minimum of approximately 1,000 kg of high-quality cannabis trim per year as input to MediPharm for the extraction and production of premium, high-terpene cannabis oil products.

Under the terms of this agreement, all cannabis oil products processed by MediPharm will be sold under Supreme Cannabis’ brands. The Company will initially launch oil products to be in British Columbia, Alberta and Ontario before expanding distribution coast-to-coast.

Subsequent to quarter end, 7ACRES received Health Canada approval for an additional 50,000 sqft of production space, bringing total licensed production space at 7ACRES to 230,000 sqft. With further production efficiencies and the completion and licensing of all 25 flowering rooms, the potential capacity of the 7ACRES’ facility is estimated to reach approximately 50,000kg per year.

In the quarter, the Company furthered its global growth strategy, becoming one of  the few Licensed Producers to secure a letter of intent (“LOI”) with Malta Enterprises. The LOI is the first step of Supreme Cannabis’ application for a Cannabis Production License in Malta. Such License would allow the Company to produce and process cannabis for medical use within Malta, one of Europe’s principal commercial entry points, and to export cannabis for medical use to certain international markets.

Progress was also made during the quarter at Medigrow, a Lesotho-based cannabis producer, with which Supreme Cannabis has a 10% equity interest and preferential global distribution agreement. Medigrow’s operations scaled significantly, facilitating their growth to more than 250 employees. An industrial-grade extractor capable of producing fractioned, higher-margin cannabis oil was installed on-site and has begun producing oil. That oil successfully achieved a positive Certificate of Analysis from a U.S.-based laboratory. Medigrow is also continuing to advance the build out of their cultivation facility which is being constructed in accordance with EU GMP standards. With additional scaling, Supreme Cannabis estimates that Medigrow will have an annual production capacity run rate of 40,000 litres (50% active). With these items in place, Supreme Cannabis and Medigrow are now exploring export opportunities in various international jurisdictions.

Subsequent to quarter end, the Company’s 7ACRES brand continued to receive recognition for its marketing activities. On April 28, 2019, 7ACRES won the best marketing campaign at the O’Cannabiz Awards for its “Respect the Plant” campaign.

Towards the end of Q3 2019, Supreme Cannabis announced the appointment of Mr. Nikhil Handa to Chief Financial Officer. Mr. Handa will help lead the Company through its next stage of growth with a focus on capital allocation planning, M&A, and transactional execution. Mr. Handa joined the Company with a wealth cross-sector capital markets experience. In particular, Mr. Handa was the VP of Finance at Well.ca and held a variety of senior finance and operational roles at Restaurant Brands International, the fast food holding company majority owned by 3G Capital.

In the quarter, Supreme Cannabis strengthened its board of directors with the appointment of a new independent director, Kenneth R. McKinnon, Q.C. As an experienced corporate executive and director, Mr. McKinnon brings substantial financial oversight and business advisory experience to the Company’s Board. Since his appointment, Mr. McKinnon has been appointed as the Chair of the Audit Committee.

Supreme Cannabis’ 2019 third quarter MD&A and consolidated financial statements for the quarter ended March 31, 2019, along with all previous public filings of The Supreme Cannabis Company, Inc. may be found on SEDAR at www.SEDAR.com.

The Supreme Cannabis Company, Inc., is a global diversified portfolio of distinct cannabis companies, products and brands. Since 2014, the Company has emerged as one of the world’s fastest-growing, premium plant driven-lifestyle companies by effectively deploying capital, with an emphasis on disciplined growth and high-quality products. 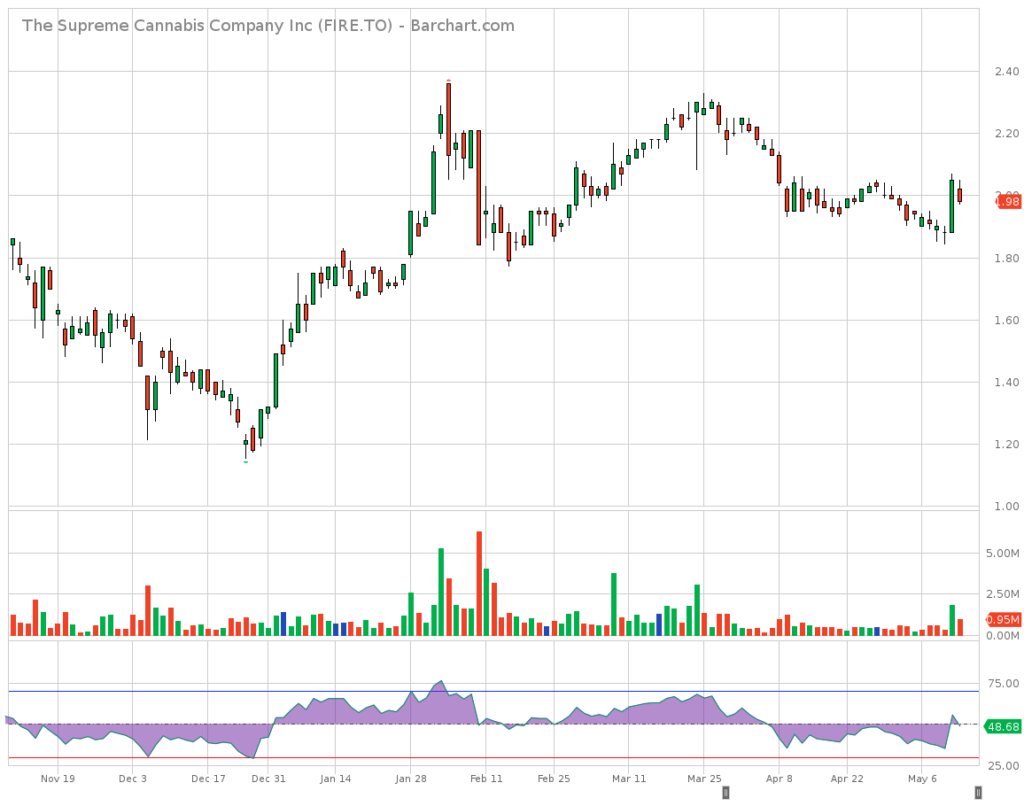 Create your own FIRE technical and interactive chart – Barchart

Technical Analysis for FIRE by TradingView