Should You Sell in May and Go Away? - The Cannabis Investor

Should You Sell in May and Go Away?

Maybe not. However, most investors are accustomed to the well-known phrase, “Sell in May and go away,” because historically the markets tend to slow down and sell off pre-summer, and throughout the summer. Whether this is due to investors taking time off or selling stocks to pay their tax bills, the true reason is unknown. Is it just a common adage used to try and explain a random phenomenon? If someone reliably sold all their stocks in May and bought back during the Fall, would their portfolio benefit? These are questions we can’t answer for certain but we can definitely look at the historical data around this so-called “strategy.”

If we dig deep enough, we notice that for over half a century the data does back up this saying. From 1950 to around 2013 we can see some strong data suggesting that the Dow Jones posted much lower returns between May and October. However ever since 2013, the statistics haven’t necessarily been suggesting this pattern is as relevant anymore. For instance, in 2016, the NASDAQ actually closed higher in May and sored in late June. 2017 holds a similar story, with the S&P/TSX Composite Index posting total returns of 4.3%. So if you would have followed this saying and tried to time the market, you may have missed some lucrative gains. I think it is fair to say that TIME IN the market, always surpasses trying to TIME the market.

Let us take a closer look at cannabis stocks to see if this is also the case there.

Looking at the leader of the pack, Canopy Growth (TSX: WEED) (NYSE: CGC), we see a strong sign of outperformance so far leading into May. WEED now sits at roughly $65.83 – however, this upward pressure could be due to their proposed billion-dollar deal with the leading U.S. multi-state operator (MSO) Acreage Holdings (CSE: ACRG.U) (OTCQX: ACRGF). Either way, it is a good indication for the broader sentiment in the cannabis space heading into the summer.

Organigram Holdings (TSXV: OGI) (OTCQX: OGRMF) and HEXO Corp. (TSX: HEXO) (NYSE-A: HEXO) are also outperforming, as they reached prices well above their 50 day EMA’s just this week. HEXO has emerged as one of the cannabis sector’s best performers this year, producing gains of up to 145% in 2019 alone. In April, one of the stock’s strongest months this year, it has risen as much as 24%. 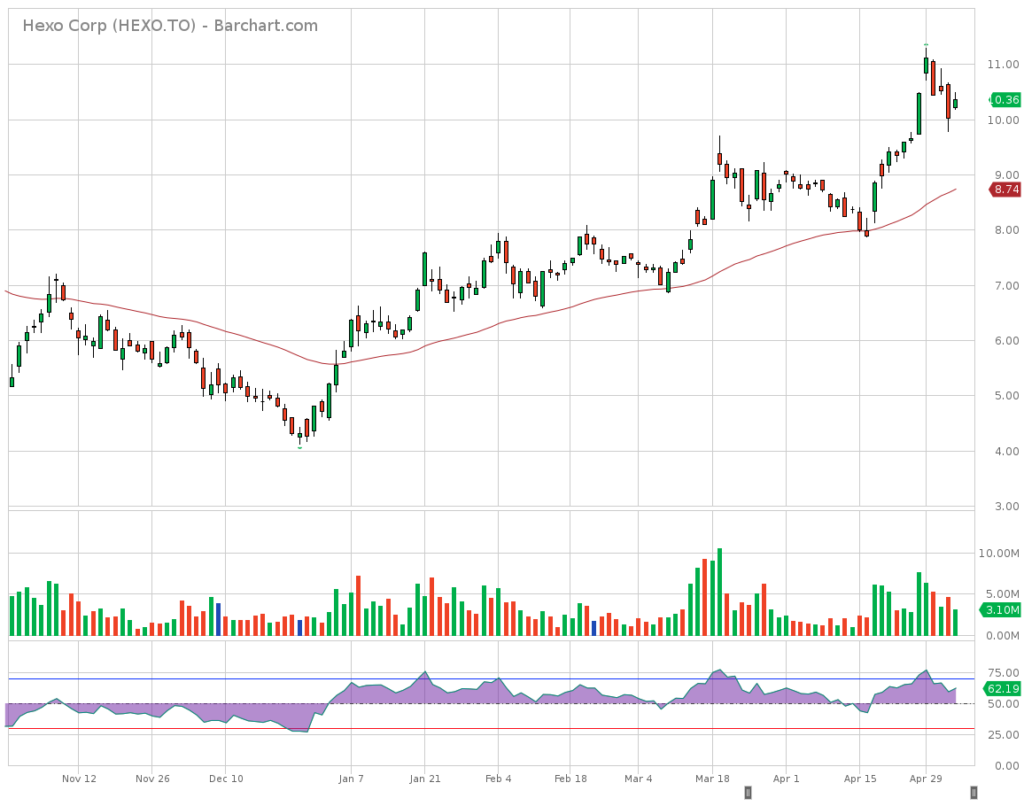 Cronos Group (TSX: CRON) (NASDAQ: CRON, Aphria (TSX: APHA) (NYSE: APHA), and Tilray (NASDAQ: TLRY) all have had more negative sentiments around them, as they have been retracing off previous highs. Cronos however still remains perched on the 100 day EMA, which is usually a safe place that technical traders will watch and often make purchases around or under if the opportunity arises. Tilray and Aphria, on the other hand, sit under their 100 day EMA’s which show signs of weaker demand. 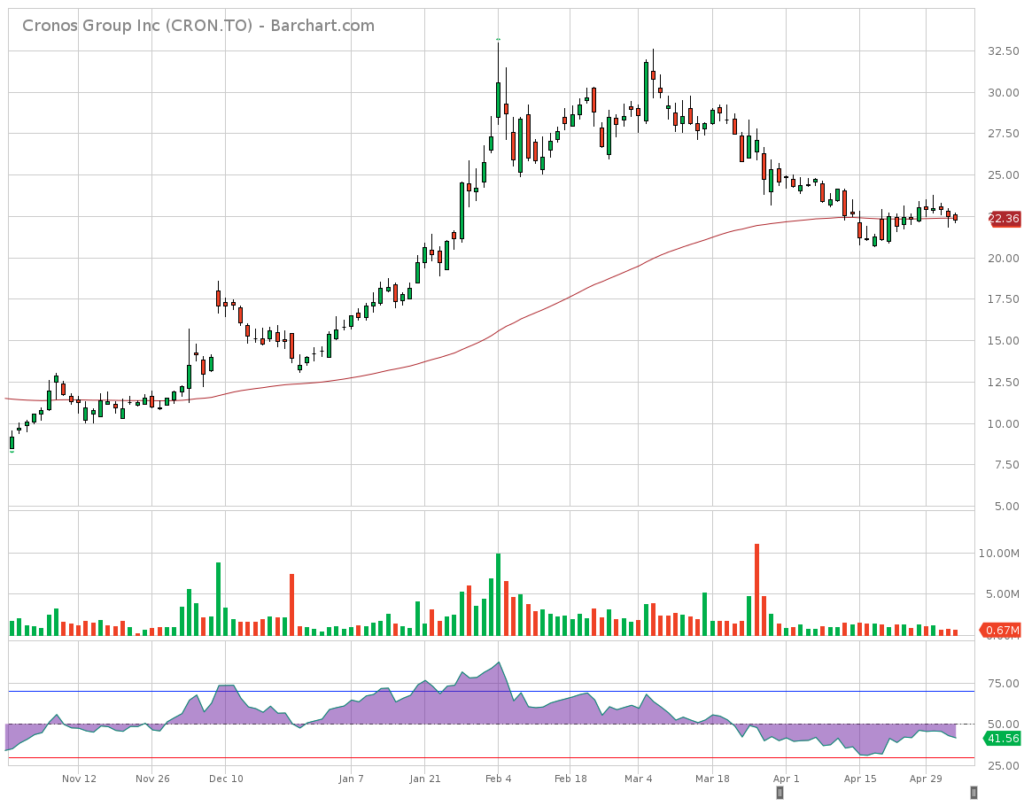 There is definitely a mix of performance across the cannabis sector, and even for bullish investors, it may be hard to image stocks ringing up further gains in the so-called late stage economic cycle. However, the marijuana sector faces a myriad of upcoming catalysts and will remain a boiling pot for even higher valuations in the near future. With the larger names leading strong into the month of May, we may see excess investment capital trickle down to the medium and small cap stocks. Although “Sell in May and Go Away” has a long-term record of being true, it certainly is not gospel.

Stay Connected to the Story and Happy Investing.

Disclaimer: We are long HEXO.