Just as the therapeutic benefits of Psilocybin are on the verge of being studied and recognized by the medical community, scientists are beginning to explore new ways of manufacturing the chemical that doesn’t require growing their expensive magic mushroom counterpart.

A team of researchers in Denmark have identified a new method of producing Psilocybin using common yeast. The DTU Biosustain researchers found that a common species of yeast found in brewing, winemaking, and baking — called saccharomyces cerevisiae — may be able to act as a host for Psilocybin through a process called ‘rational metabolic engineering.’

If Psilocybin — the psychedelic component of Magic Mushrooms that has the potential to treat depression and other psychological conditions — gets approved as a pharmaceutical drug, this yeast-based production appears to be a much more commercially viable option than removing the compound from mushrooms.

“While psilocybin is an interesting and pharmaceutically relevant molecule in its own right, one of the unique features of synthetic biology is the ability to ‘mix and match’ enzymes to create new interesting molecules that aren’t found in nature and are infeasible to produce by chemical synthesis,” explain the authors at DTU Biosustain.

Because yeast and Psilocybin are closely related species, the Psilocybin compound is able to be produced in yeast via a biosynthetic production method requiring only the addition of sugar and other nutrients — resulting in a more economical option than traditional lab-based psilocybin production.

“It’s infeasible and way too expensive to extract psilocybin from magic mushrooms, and the best chemical synthesis methods require expensive and difficult to source starting substrates,” says Nick Milne, former Postdoc at DTU Biosustain and CSO and co-founder of Octarine Bio. “Thus, there is a need to bring down the cost of production and to provide a more consistent supply chain.” 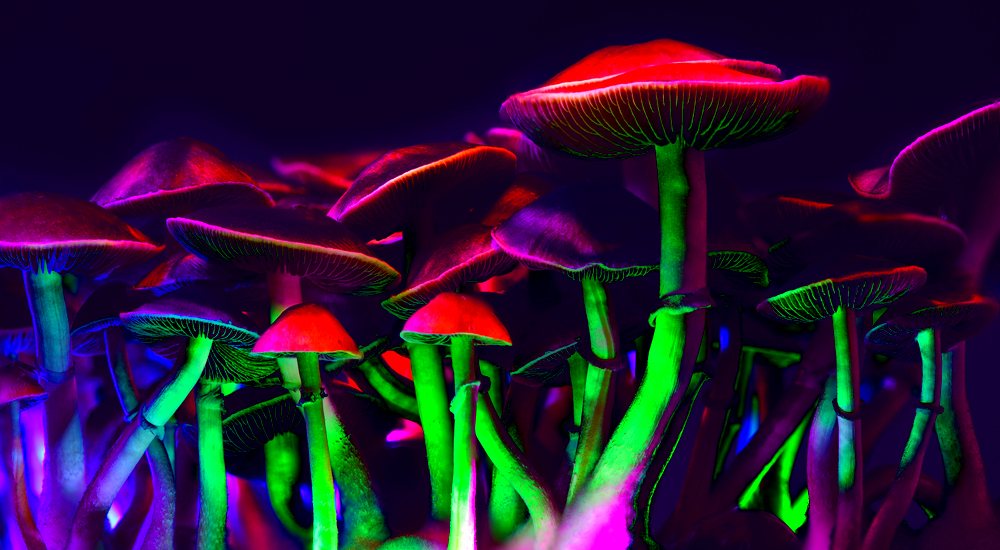 Obstacles Yet to Be Overcome

In the DTU Biosustain study, which was published in the Metabolic Engineering Journal, the researchers identified some significant obstacles that would need to be overcome if production was to be scaled up — one of which pertains to the phosphate group on the Psilocybin’s skeleton that is lost when the compound is converted into an active form.

“What we find in the study is that we get a lot of this non-phosphorylated compound psilocin,” explains Nick Milne. “Essentially, we are losing half of our product because the phosphate group falls off. Dealing with this high amount of psilocin is something that absolutely needs to be solved before realistically moving to a production process.”

How does this issue get solved? With a lot more metabolic research. The good news is that the scientists are starting from a well-known point: the shikimate pathway.

In the U.S. alone, at least 50 clinical trials exploring the efficacy of Psilocybin as a medical treatment are completed or currently underway. These studies are looking at the role of Psilocybin in treating a range of mental health conditions, including anxiety, severe addiction, depression, and cluster headaches.

“Although its notoriety originates from its psychotropic properties and popular use as a recreational drug, clinical trials have recently recognized psilocybin as a promising candidate for the treatment of various psychological and neurological afflictions,” stated the researchers in the Metabolic Engineering journal.

Because current studies rely on chemical synthesis, a time-consuming and costly way to produce Psilocybin, finding a way to produce the compound in a more financially efficient manner has become a key research priority. While certain U.S. cities — such as Denver and Oakland — have decriminalized the use of Psilocybin, the hallucinogenic substance remains illegal in most U.S. states and around the world. And because the amount of Psilocybin found in psychedelic mushrooms is too low to be extracted in a commercially viable and streamlined way, it’s difficult to consistent and scalable processes.

Is that all about to change?

The answer could be hidden in one of our most common household ingredients: yeast.