The recent protests against police violence that have swept across the country have helped organizers in Washington, D.C. collect over 5,000 new signatures for a measure to decriminalize psychedelics locally. Tents have been stationed along major streets throughout Washington, and signatures have been collected while adhering to physical distancing restrictions.

To continue building momentum, the Decriminalize Nature D.C. campaign announced it will be mailing petitions to all registered voters in Washington D.C. as part of the group’s effort to add its psychedelics decriminalization measure to the ballot in November.

The proposal in question is called Initiative Measure No. 81: Entheogenic Plant and Fungus Policy Act of 2020, or ‘I-81.’ If passed, I-81 would make law enforcement against entheogenic substances such as Ayahuasca, Ibogaine, and Psilocybin (the active ingredient in ‘Magic Mushrooms’) among the lowest priority for D.C. authorities. The deadline for Decriminalize Nature D.C. (DNDC) to submit approximately 30,000 valid signatures from registered voters is July 6, 2020. However, because of delays related to mail processing, along with petition errors and required resubmissions, signatures are requested by June 26, 2020. Meeting the date and submission number would mean that I-81 would qualify for the ballot.

“Initiative 81 would make a small change: shifting enforcement of laws against natural plant medicines to be among the lowest law enforcement priorities,” explains the DNDC on the I-81 section of their website. “This change would help thousands of D.C. residents suffering from anxiety, PTSD, addiction, or depression who currently fear arrest or prosecution for pursuing healing through natural, entheogenic substances. The initiative has the support of prominent medical professionals, police officers, and D.C. residents.” 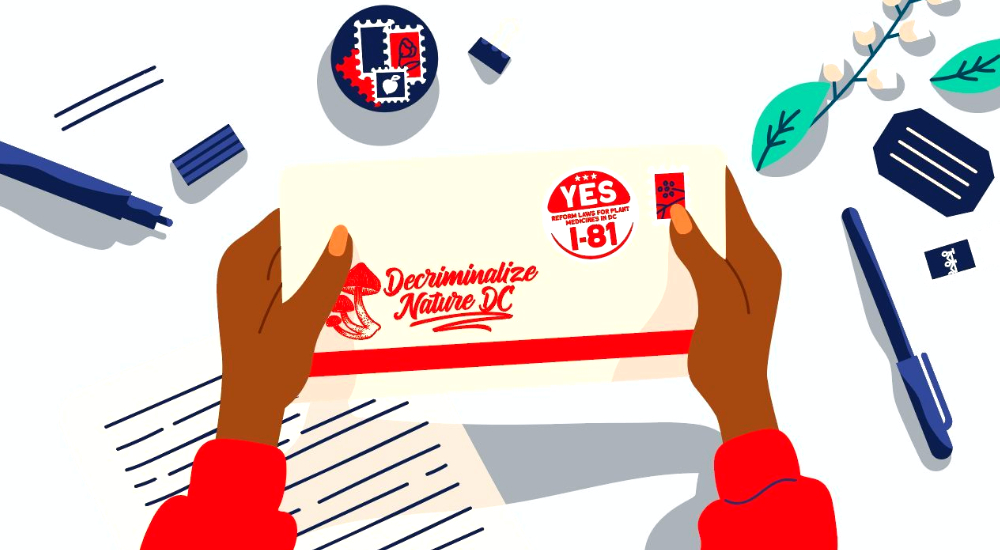 Collecting Signatures Hasn’t Been Easy, But DNDC Continues to Persevere and the Results Look Promising

In light of the physical distancing and stay-at-home measures resulting from the COVID-19 pandemic, activists and organizers have had an especially difficult time collecting signatures — to the point of having to suspend the collection of in-person signatures.

Local lawmakers gave the I-81 campaign a boost when Washington D.C. Council Board of Elections approved legislation allowing for alternative methods of signature collection. Thanks to the newly passed legislation, registered voters are now allowed to download the petition, print it, sign it, take a photo (or scan) the signed document, and email it to the campaign headquarters. It’s a win-win, as this allows residents in support of I-81 to make their voices heard, while still respecting the physical distancing measures required to slow the spread of COVID-19.

DNDC wasted no time in testing the new signature collection method, sending 10,000 petitions to residents throughout Washington, requesting that they print, sign, and return. In the four weeks following the mail-out, DNDC reported a 7.4% return rate with valid signatures and the group expects this rate to climb in the coming weeks. Encouraged by the initial response, DNDC expanded its mail-out to roughly 220,000 mailing addresses — at an estimated cost of USD $160,000 — which represents nearly every household in Washington, D.C. with at least one registered voter.

While the specific objectives of the two campaigns are obviously different, there is common ground between the DNDC and the Black Lives Matter movement: social justice.

The Black Lives Matter demonstrations have brought attention to a crucial part of the DNDC’s messaging, that the war on drugs plays a significant role in the racial injustices seen throughout the U.S.

“As a campaign of concerned D.C. citizens focused on reforming police priorities and enacting this small step to end the war on drugs in the District of Columbia, Initiative 81 compliments policing reforms demanded at ongoing Black Lives Matter protests which DNDC has attended and supports,” explained DNDC in a press release.

DNDC took to Twitter to further express its support of Black Lives Matter and to demonstrate the shared priorities of the movements.

In a time of such widespread division within the U.S., it’s a promising sign to see two like-minded campaigns coming together to support one another’s messages of social justice. Let’s hope all of the historic action we’re witnessing leads to meaningful and long-lasting changes to society.

Have you read the research on #entheogens? Recent clinical studies have demonstrated how these plant and fungi medicines can make a difference and help people live better lives: Learn more here: https://t.co/EJk8QzOSRv pic.twitter.com/zxBeRD5EKN