Canaccord analyst Tania Gonsalves assigned a “Speculative Buy” rating on shares of MindMed while slapping a bullish CDN $1.75 price target on MMED stock. As a result of the new research coverage, MMED shares have soared over 60% in the past week.

“Open your mind to a new kind of medicine,” wrote Gonsalves. “[MindMed] differentiated itself as one of the few legitimate companies in the space. Lead drug 18-MC is a non-substitute treatment for opioid use disorder (OUD),” added Gonsalves.

The report highlighted 18-MC‘s potential as a frontline therapeutic to combat opioid addiction as well as MindMed’s exclusive collaboration with the University Hospital Basel’s Liechti Lab, stating that it gives the company over ten years of psychedelics research.

The analyst went on to say that, “MMED is only at the beginning of sifting through this trove of data but has already selected five programs to advance.” Gonsalves anticipates that Liechti Labs will, “act as MMED’s research arm, funnelling new programs into its pipeline for years. “

In more recent news, MindMed announced today that the company in collaboration with Liechti Lab has been conducting R&D on psilocybin. The purpose of the joint study is to better understand and compare the altered states of consciousness induced by psilocybin and LSD.

“Both LSD and psilocybin are thought to induce hallucinations mainly through the stimulation of the 5-HT2A receptor. However, it is known that there are differences in the receptor activation profiles between the two substances and these differences may induce different subjective effects. Therefore, with this study we will try to understand and compare the altered states of consciousness induced by the two substances and identify potential medicines for patients,” stated Dr. Miri Halperin Wernli, President of MindMed. 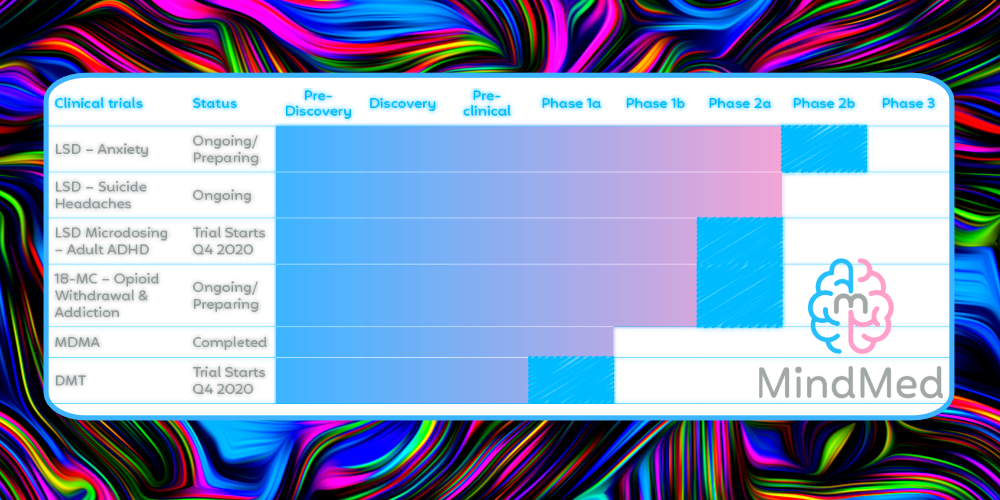 As part of the company’s plan to expand its American shareholder base, MindMed announced on Monday that it applied with the NASDAQ to list its shares to the national U.S. exchange. To assist with the company’s uplisting strategy, MindMed has retained Canaccord Genuity as its financial advisor. Canaccord will also be tasked with evaluating potential M&A opportunities for the psychedelics company.

“The psychedelic medicine industry is maturing and expanding rapidly, and we want to grow with it. We look forward to working with Canaccord Genuity to evaluate the opportunity for an up-listing on NASDAQ and help us navigate M&A opportunities now available to the company,” stated MindMed Co-Founder and Co-CEO JR Rahn.

According to the NASDAQ Initial Listing Guide, “it generally takes four to six weeks to process a listing application, this time frame is variable and may be shortened considerably if the application raises no issues and the company responds quickly to Staff comments.”

There is no guarantee the NASDAQ uplisting will be approved as it’s subject to certain regulatory hurdles as well as a company review. However, in the likelihood that everything goes smoothly, MindMed shareholders can expect the NASDAQ uplisting process to play out something like this:

If all goes well, MindMed will become the second psychedelics firm to list on the NASDAQ joining Compass Pathways (NASDAQ: CMPS), which made its trading debut this past Friday after completing its $127.5 million IPO. Shares of CMPS stock skyrocketed over 70% during its first trading session, providing further confirmation of the substantial investor demand for Psychedelic Stocks on the national U.S. exchange.

Commenting on the Compass Pathways IPO, MindMed CEO JR Rahn stated: “The immense success of the Compass IPO is a clear bellwether for the growing psychedelic medicine industry. A 70% rise on the first day of trading is a clear vote of confidence for a new asset class of medicines from Wall Street.”

Both CMPS and MMED (should it complete its uplisting) will hold a massive liquidity advantage over its publically traded peers. A NASDAQ listing provides a vast increase in exposure to retail and institutional investors, including Wall Street hedge funds.

Since its IPO on Friday, shares of CMPS stock have risen as much as 85%, closing Wednesday at $36.50 per share.

In the three days following the release of Canaccord’s new research coverage, shares of MindMed’s NEO listed MMED stock climbed as much as 59%, closing Wednesday at $0.65. The company’s U.S. MMEDF shares jumped 67% during the same three day period and currently sit at $0.473.