Psychedelics Are Creating a Pathway to Sustainable Addiction Treatment

There are already treatments for certain addictions—methadone for heroin and addictive pain killers, and a vaccine being developed for cocaine addiction. But these are old-school methodologies with their own serious side effects—for example, users can become addicted to the opiate methadone.

There have been a number of studies about the potential of psychedelics to help reduce opiate usage. One study used an anonymous online survey of 444 people who reported 4.5 years of problematic substance use on average before their psychedelic experience. Most reported taking a moderate or high dose of LSD (43%) or psilocybin (29%).

Another study by Johns Hopkins University with 15 habitual tobacco smokers taking psilocybin resulted in an 80% abstinence rate over six months, compared to an approximate 35% success rate for patients taking varenicline (Chantix), which is widely considered to be the most effective smoking cessation drug.

Yet another study found that psilocybin was effective in treating alcohol dependency.

Russian researchers found that tests with heroin addicts treated with ketamine produced a “significantly greater rate of abstinence in heroin addicts within the first two years of follow-up and a greater and longer-lasting reduction in craving for heroin.”

Just having prior experiences of using psychedelic substances has been shown to reduce the chance of opioid abuse or addiction, according to an article in the Journal of Psychopharmacology.

The success of that work has inspired even more research over the last few years. 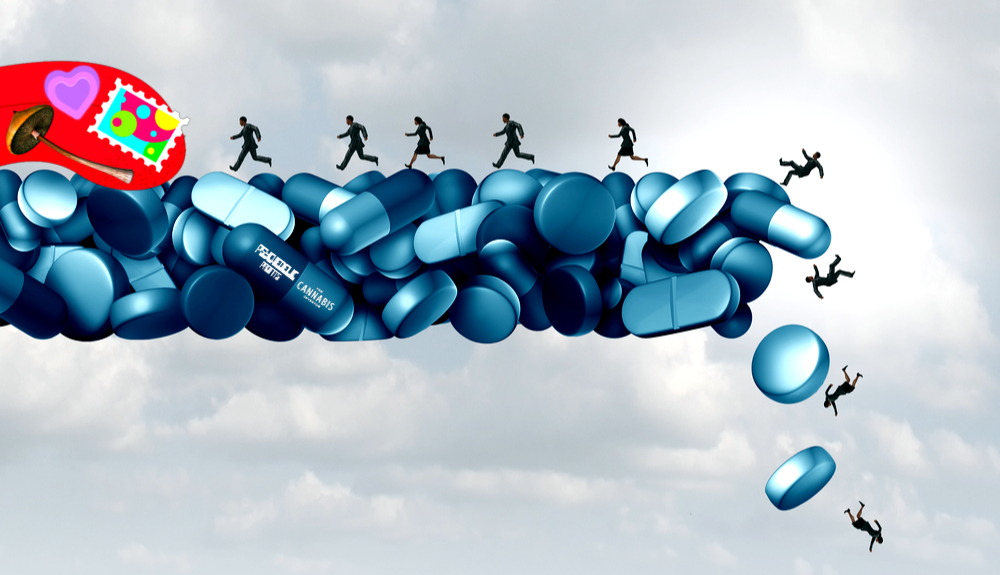 Dr. Mark Braunstein, a psychiatrist, speaking about ketamine at the 2020 Virtual PsyTech Summit in May, talked about treatment experiences with ketamine, an anesthetic medication related to phencyclidine, or PCP (but with less than 10% of the potency of pure PCP). “Doing treatments with ketamine, you see things change,” he said. “People with long-standing patterns of addictions were able to change and drop that addiction just like that. I can’t tell you how many of my clients were not necessarily trying to quit (their addiction), but as an aside of utilizing these medications, they have quit their Xanax or their cigarettes or their drinking.”

Dr. Jeffrey Kamlet, working with the plant-based hallucinogen ibogaine, said that, in 1997, a colleague brought him a psychedelic drug and said it could be used to detoxify an addicted person “in 24 hours.” “It takes 90 days using the detoxification model in the U.S system,” he said. “And so that was nothing short of a miracle happening.”

He added: “I will be the first person to tell you that ibogaine is not the cure for addiction. But how do I get clean without going through 90 days of hell? Then how do I stay clean? Those are two different paradigms.

“What makes ibogaine so incredibly important and so incredibly special is that it’s the only substance that exists on this planet which will stop acute opiate withdrawal in less than 24 hours,” he said. “It works like nothing else works.”

Also working with ibogaine to help curb opioid addiction is MindMed (NEO: MMED) with its 18-MC study. 18-MC is a synthetic and non-hallucinogenic derivative of ibogaine, which the company is developing as a potential treatment for opioid withdrawal and addiction. MindMed recently began dosing the first subject in its Phase 1 human safety trial of 18-MC and expects to begin Phase 2 trials in late 2020.

Psychedelic clinic operator AltMed, which was acquired by Champignon Brands (CSE: SHRM) (OTCQB: SHRMF), is advancing psychedelic medicines via clinical trials to assemble the most compelling IP portfolio, clinical pipeline and drug development platform in the psychedelics space. AltMed will sponsor its network of clinicians and thought leaders throughout R&D campaigns and clinical trials to target addiction as well as several other indications.

Kamlet thinks drugs like MDMA (known as the party drug “Ecstasy” or “Molly”), ketamine and ayahuasca, a plant-based psychedelic tea, are great in helping people stay clean even if they are working a 12 step program. “But let’s remember the difference between drugs like cocaine and methamphetamine, where the physical withdrawal is more mental, as opposed to drugs like alcohol and opiates. Those patients have to be detoxed first before doing MDMA.”

Dr. Ben Sessa, a clinical psychiatrist and senior research fellow at the Imperial College of London, wrote in an editorial for the Multidisciplinary Association for Psychedelic Studies (MAPS) that psychedelics are important tools for further academic study. “Their recognized psychological effects fit well into an approach looking for the neurobiological links between mental and physical states.”

In an article for the British Journal of Psychiatry, Sessa reported that there are examples of the use of psychedelic plants to tackle addictions by indigenous populations in West Africa (the iboga root containing ibogaine), and in North America (the peyote cactus containing mescaline) which have been reported to reduce rates of alcohol dependence.

Sessa’s article also included observations about another possible mechanism for the anti-addictive properties of hallucinogens and a period “afterglow” that gave patients emotional strength to continue abstinence and experience decreased cravings.

During the 2020 Virtual PsyTech Summit, he said that, as for the future of addiction and psychedelics, he wants to be using these “incredible unique pharmacological compounds” to turn around fixed narratives that develop in childhood. “Narratives such as ‘I am useless,’ or ‘I am a failure’ or ‘It’s my fault I deserve abuse,’ and ‘Only drugs or alcohol are going to stop me from feeling this way,’” Sessa said. “No amount of other medicines or psychotherapy to date has really effectively tackled those core trauma aspects that become so fixed and rigid. I have seen it with MDMA, and the way it tackles those cord, rigid narratives. That really is a fantastic opportunity for addiction and psychiatry.”

💡Also Read: Psychedelic Stocks May Be One of the Most Undervalued Opportunities, Here’s How to Play the Thriving New Sector