The psychedelics business is developing faster now than ever before, kicked off in earnest when the FDA granted a “breakthrough therapy” designation to Compass Pathways in October 2018 and has continued accelerating ever since.

Compass Pathways (NASDAQ: CMPS) filed a patent for its psilocybin formulation in January, and in August, the company filed with the SEC to raise $100 million via an initial public offering (IPO) on the NASDAQ. This week, the company announced its IPO was upsized from $100 million to $127.5 million.

Compass officially went public on Friday, joining a growing group of biotech and life science healthcare companies that have also filed IPOs on the NASDAQ. In its inaugural trading session, shares of CMPS Stock soared over 70%, easily becoming the most successful psychedelics IPO to date.

Then there is the uptick in research to back up product commercialization. The well-respected Johns Hopkins University is leading psychedelics medical breakthroughs at its Center for Psychedelics and Consciousness Research.

Legal obstacles to psychedelics development are being challenged and taken down. For example, psilocybin was decriminalized in Denver; decriminalized in Santa Cruz and Oakland, California; and, perhaps by this November, will be decriminalized in Washington, D.C. through the newly-created Initiative 81 “Yes on 81”, while at the same time becoming completely legalized in Oregon through Oregon Measure 109 “Yes on 109.”

More psychedelics business development deals are underway by a handful of other companies, some with big life science players.

Of particular note is the $30 million in non-profit donations raised in less than six months by the Multidisciplinary Association for Psychedelic Studies (MAPS) for its non-profit Capstone Campaign to fund the final research required for U.S. Food and Drug Administration (FDA) approval of MDMA-assisted psychotherapy for posttraumatic stress disorder (PTSD).

Among the contributors to the fund are four foundations that would normally support mainstream medical causes, including the Bob and Renee Parsons Foundation, created by Bob Parsons, the founder of GoDaddy and PXG, and his wife Renee Parsons, president and creative director of PXG Apparel; and the Fournier Family Foundation, created by Alan Fournier, hedge fund manager and founder of Pennant Capital Investors.

Other contributors included Blue Ridge Capital, a real estate investment company, and Walden Venture Capital, who bill themselves as lead investors in first or early institutional rounds of financing after a company “has shown audacious progress on angel or seed capital.”

All of this funding was built under the auspices of the MAPS’ umbrella organization, the Psychedelic Science Funders Collaborative, which represents an organizing perspective that mirrors similar developments in mainstream life science, and gives additional credibility to psychedelics as a wellness treatment choice.

According to an article by a stock analyst at the Motley Fool, psychedelic medicine “has the potential to be a goldmine for early investors.”

But as more big business players get involved in the development of this industry, do they all know what they are getting into? Do they realize the significance of being part of a new movement in mental wellness involving the use of a formerly banned substance that is still fighting the stigma associated with it, and all of the other misinformation coming to it from over 50 years of misunderstanding psychedelics? Shouldn’t these new movers and shakers be held accountable to something higher than just capitalizing on the next new thing? 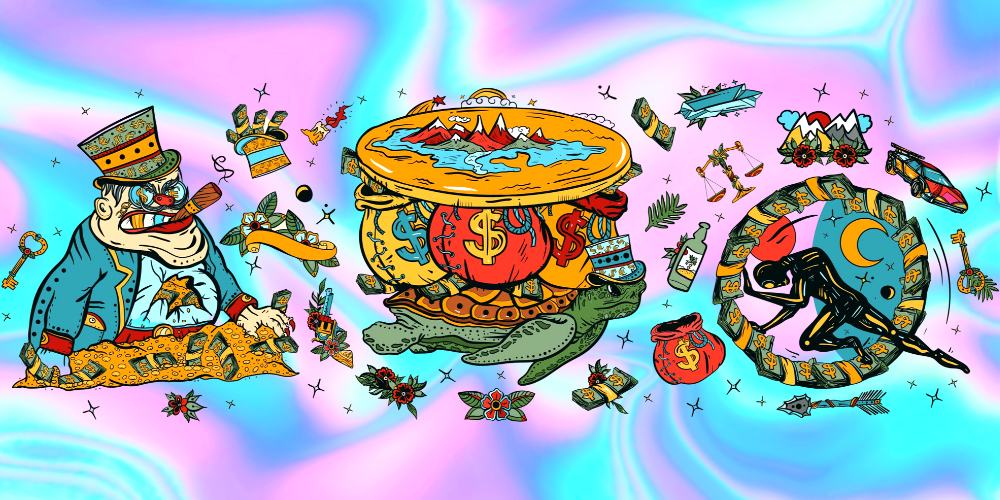 One organization comprised of psychedelics advocates and business developers have proposed a pledge that attempts to hold the newcomers accountable. The North Star Ethics Pledge, described as “a first step in the demanding work of shaping the psychedelic industry around psychedelic wisdom,” has been created to help find shared values for the emerging psychedelic field and is expected to be used as a tool to “set and name the intention for this work.” Stakeholders have suggested creating a sort of seal from North Start that certifies ethical business practices.

This pledge came about after a dinner with twenty of the psychedelics “elders” who were asked questions about their hopes and fears for this moment in psychedelics, and what they’d like to see done.

At other information-seeking sessions, clinicians and researchers were asked for their perspectives on commercialization and what would support their work now. “Here a concern was raised of a ‘nuclear arms race’ effect, where unethical actors would have a competitive advantage to seize power, rapidly scale and control the narrative,” pledge creators stated.

It’s the scaling up of the psychedelics businesses that have really prompted business ethics concerns.

And Compass is putting more mojo behind its move. The company announced a bump in the firepower for its business development efforts with the addition of Chief Development Officer Trevor Mill, formerly with one of the first global biotechnology companies, Biogen (which had over $12 billion in revenue in 2017); and Chief Financial Officer Piers Morgan, who had worked previously as either CFO or CEO for multiple large European biotech companies and has a background as an investment banker specializing in mergers and acquisitions. Morgan has also led various IPOs on NASDAQ.

As it stands now, there is a perception that for-profits like Compass could be taking advantage of the research by non-profits, a clear business ethics problem. Compass opened its doors in 2015 as a non-profit, then switched to a for-profit two years later, causing some consternation among industry watchers about its true intentions.

In light of psychedelics, business development moves like that, Rick Doblin, founder and executive director of Multidisciplinary Association for Psychedelic Studies (MAPS), urges caution—but understanding—as the industry continues to develop. “I think we’re in a terrific situation, and the easy criticism of ‘Oh capitalism is bad, for-profit companies are bad, and they are trying to do evil things with psychedelics to monopolize the market’- I don’t think that’s really happening,” he said in an interview published on MAPS website about “psychedelic capitalism.”