Organigram meets schedule and is on track to increase target annualized production capacity to 113,000 kg1 by the end of 2019

MONCTON, NB, April 30, 2019 /CNW/ – Organigram Holdings Inc. (TSXV: OGI) (OTCQX: OGRMF), the parent company of Organigram Inc. (the “Company” or “Organigram”), a leading licensed producer of cannabis is pleased to announce that it has received an expanded cultivation license from Health Canada in line with its previously announced Phase 4A and 4B expansion plans for its Moncton Campus.

The scope of the amendment includes approval of the following:

As a result of this approval, cannabis plants will be moved into these new rooms on a rolling basis in early May.  The Company anticipates being able to harvest product from these new rooms by the end of July, based on normal cultivation timelines.  Subsequent Health Canada licensing amendment submissions will follow to allow for a continuous filling of the remaining 50 Phase 4 cultivation rooms (4A (18 rooms) and 4B (32 rooms)) mirroring the successful approach utilized with the Company’s Phase 2 and 3 expansions.

A Phase 5 refurbishment is also underway for an edibles and derivative facility and additional in-house extraction capacity.

“Our stalwart commitment to our customers is reflected in our ongoing investment in exceptional processes and delivering exceptional products,” says Engel.

Organigram is focused on producing the highest-quality, indoor-grown cannabis for patients and adult recreational consumers in Canada, as well as developing international business partnerships to extend the company’s global footprint. Organigram has also developed a portfolio of legal adult use recreational cannabis brands including The Edison Cannabis Company, Ankr Organics, Trailer Park Buds and Trailblazer. Organigram’s primary facility is located in Moncton, New Brunswick and the Company is regulated by the Cannabis Act and the Cannabis Regulations (Canada). 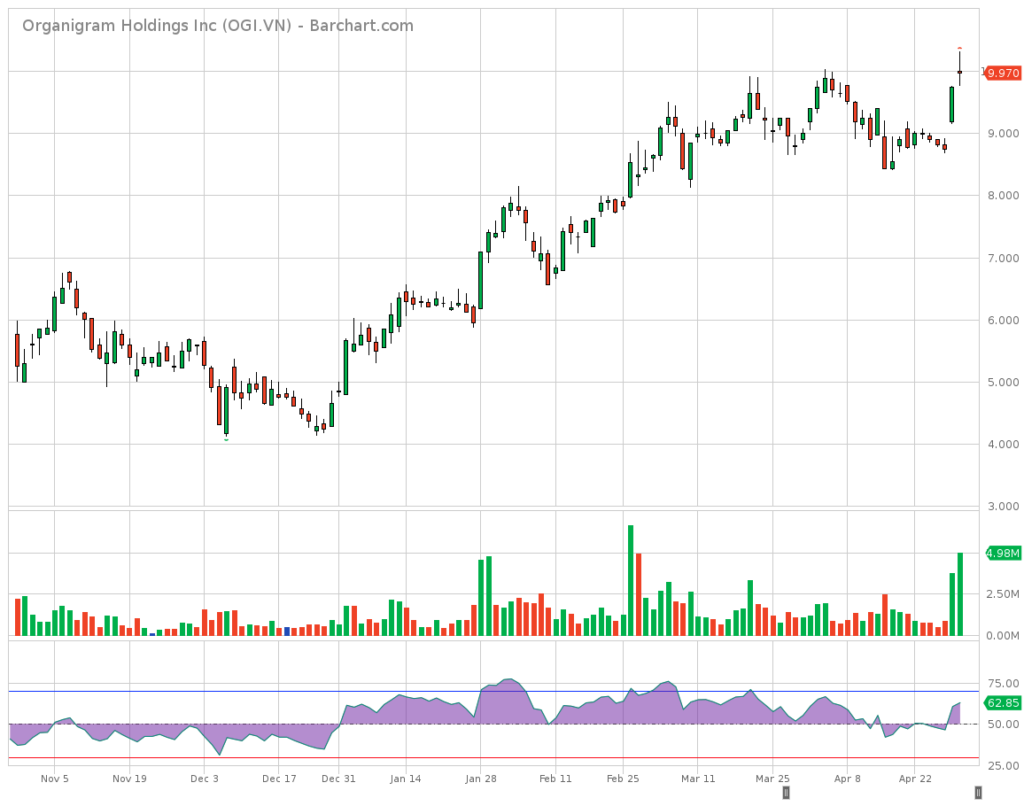 Create your own OGI technical and interactive chart – Barchart