MONCTON, NB, Dec. 14, 2018 /PRNewswire/ – Organigram Holdings Inc. (TSX VENTURE: OGI) (OTCQX: OGRMF), the parent company of Organigram Inc. (the “Company” or “Organigram”), a leading licensed producer of cannabis, is pleased to announce its 2018 fiscal year and fourth quarter results. The Company’s fiscal year-end and fourth quarter encompasses operations up to and including August 31, 2018 and as a result, does not include adult-use recreational cannabis revenue.

“The importance of 2018 can not be overstated for Organigram as well as the industry,” said Greg Engel, the Company’s Chief Executive Officer. “We are incredibly proud of our ability to meet the challenges of scaling our business in preparation for the adult recreational use market. We are pleased with our progress to date and believe that we have performed well in a highly competitive space while always maintaining a sustainable cost structure. Ultimately, it is our view that our Moncton Campus will be seen as a crown jewel in the industry as it is able to produce consistent, high-quality indoor grown product at scale to support our brands with the lowest dried flower cultivation costs reported to date in Canada.”

The Company reported biological assets and inventories of $19.9 million and $45.0 million, respectively, as of August 31, 2018. The Company believes that these balance sheet categories are an important indicator of a licensed producer’s ability to service its medical and adult recreational customer.

The Company continues to add resources to refine and streamline its packaging, excise stamp application and logistics processes to draw down its dried flower and oil inventories to meet ongoing demand.

Based on media coverage and physical presence in stores, the Company is confident that it currently has the leading market share position in the Maritime provinces of New Brunswick, Nova Scotia and Prince Edward Island with a strong presence in Alberta, Manitoba, Newfoundland and Ontario.

Cultivation and Other Operations

Other Milestones and Strategic Initiatives

The following results do not include any of the sales to the adult recreational use market which began in September to fill supply pipelines for adult recreational use launch on October 17, 2018. Those sales will be reflected in the first quarter of fiscal 2019 which includes the three-months ended November 30, 2018. 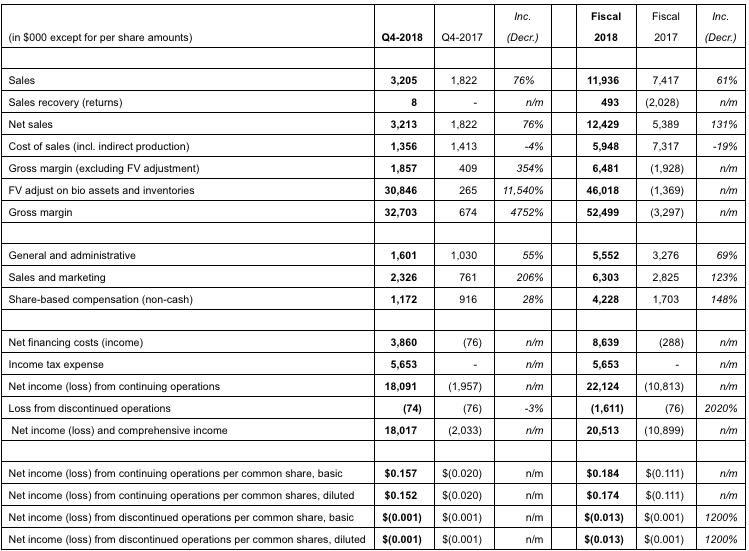 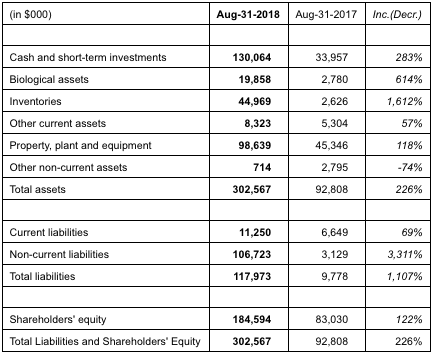 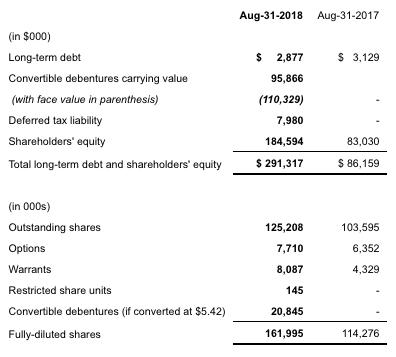 Outstanding share count as at December 12, 2018 is as follows: 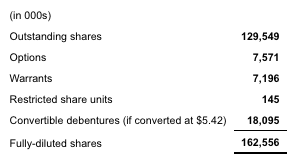 Organigram is focused on producing the highest-quality, indoor-grown cannabis for patients and adult recreational consumers in Canada, as well as developing international business partnerships to extend the company’s global footprint. In anticipation of the legal adult use recreational cannabis in Canada, Organigram has developed a portfolio of brands including The Edison Cannabis Company, Ankr Organics, Trailer Park Buds and Trailblazer. Organigram’s primary facility is located in Moncton, New Brunswick and the Company is regulated by the Cannabis Act and  theregulations under the Cannabis Act.

This news release contains forward-looking information which involves known and unknown risks, uncertainties and other factors that may cause actual events to differ materially from current expectations. Important factors – including the availability of funds, consummation of definitive documentation, the satisfaction of closing conditions including the receipt of any required regulatory approvals, the results of financing efforts, supply risks, construction risks, changes in law and regulation, industry competition, crop yields – that could cause actual results to differ materially from the Company’s expectations are disclosed in the Company’s documents filed from time to time on SEDAR (see www.sedar.com). The forward-looking estimates of additional production capacity are based on a number of material factors and assumptions including that: The facility sizes will be as estimated with the same amount of cultivation space being used per grow room for cultivation as in Phases 2 and 3; The ratio of dried cannabis cultivated per canopy square foot of grow room will be consistent with historical output in the Company’s existing facilities; All grow rooms designated as grow rooms will be utilized for their intended purposes (from time to time rooms may be used for other purposes, such as for storage); Construction of the facilities will be on time in accordance with the estimates in time to meet the target onboarding dates. Readers are cautioned not to place undue reliance on these forward-looking statements, which speak only as of the date of this press release. The Company disclaims any intention or obligation, except to the extent required by law, to update or revise any forward-looking statements, whether as a result of new information, future events or otherwise.

The financial information in this news release contains certain financial performance measures that are not defined by and do not have any standardized meaning under IFRS and are used by management to assess the financial and operational performance of the Company. These include but are not limited to target production capacity; cost of cultivation per dried flower harvested (both “cash” and “all-in”); Gross margin (excluding fair value adjustments); Adjusted net profit; Adjusted EBITDA and Cash flow. The Company believes that these non-IFRS financial measures, in addition to conventional measures prepared in accordance with IFRS, enable investors to evaluate the Company’s operating results, underlying performance and prospects in a similar manner to the Company’s management. These non-IFRS financial performance measures are defined in the sections in which they appear. As there are no standardized methods of calculating these non-IFRS measures, the Company’s approaches may differ from those used by others, and accordingly, the use of these measures may not be directly comparable. Accordingly, these non-IFRS measures are intended to provide additional information and should not be considered in isolation or as a substitute for measures of performance prepared in accordance with IFRS.

These Pot Stocks Soared Today as Demand for Cannab