Now Listed on the NEO, MMED Stock Was Very Active on its First Day, Trading Over 14 Million Shares

For those unfamiliar with the NEO Exchange, the NEO’s website describes it as “a progressive stock market that brings together investors and capital raisers within a fair and transparent environment. The NEO Exchange lists senior companies and investment products who want a stock exchange that enables investor trust, quality liquidity and broad awareness, including unfettered access to market data.”

“Today, MindMed sits at the tipping point of doing things differently by realizing the untapped potential of psychedelics-derived medicine to find treatments to neurological disorders. As a stock exchange, we also do things differently by always putting the best interest of investors and capital-raising companies first in everything we do,” said NEO President and CEO Jos Schmitt.

“We are honoured to be MindMed’s global go-public partner. Their decision to list with us is a testament to our values and innovation that deliver tangible solutions and results. MindMed’s listing on NEO will enable their ability to access investor interest around the world.”

Before going public, MindMed recently completed a pre IPO financing round, which added another USD $24.2 million to the company’s coffers. As you may have read in our previous Psychedelic Profits article, MindMed is being backed by some very high profile investors in Kevin O’Leary and Bruce Linton. Linton is the founder and former CEO of Canopy Growth (TSX: WEED) (NYSE: CGC) (FRA: 11L1) and currently sits as a director on MindMed’s board.

O’Leary, also known as Mr. Wonderful on ABC’s hit show “Shark Tank,” has been very active in creating awareness for MindMed and the psychedelics space as a whole. Mr. Wonderful was front and center this morning during MindMed’s historic IPO bell-ringing ceremony and wasted no time making the media rounds, which included sit-down interviews with BNN Bloomberg and Midas Letter.

“Psychedelics have been under-researched and stigmatized by society. As an investor, I am attracted to MindMed because they are solving health problems through federally-authorized clinical trials, and have no interest in recreational use,” stated O’Leary. 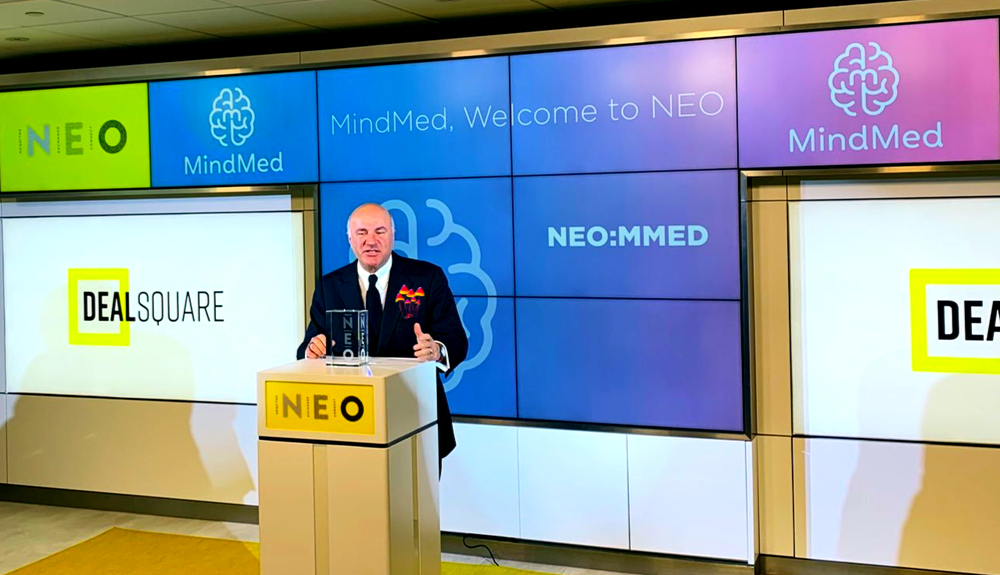 MindMed is developing psychedelics derived medicines aimed at targeting the medical needs of the opioid crisis as well as other forms of addiction. The company has established a division dedicated to the science surrounding psychedelics microdosing and under government supervision, will move forward with clinical trials to evaluate its efficacy.

With MindMed now publicly traded, the company has access to larger pools of institutional capital. This will allow it to ramp up operations and further build out its pipeline of clinical trials for medicinal psychedelics.

“Today marks a significant step forward in our ability to access further institutional capital to fund our ground-breaking clinical trials and mission to build the most compelling pipeline of psychedelic inspired medicines. NEO provided a clear, efficient path to go public on their institutional-grade main-board stock exchange. Psychedelic medicines present an opportunity to address large societal problems, like the opioid crisis, and a public listing of MindMed could help accelerate the path to a cure.”

The company is also preparing to conduct a Phase II clinical trial focused on adult ADHD using LSD micro-dosing, which it expects to begin later this year.

“We believe that hallucinogenic therapies have great merit and benefits for treating addiction. But, undergoing a ‘psychedelic trip’ might be a daunting proposition to some patients. We want patients to pick up these medicines from their local pharmacy with a prescription. We feel there is an immense opportunity to create next-gen versions of psychedelics for approval as FDA drugs,” said Rahn.

Shares of MindMed’s NEO listed MMED stock officially closed its first day of trading at $0.405 per share, up 22.7% on the day. The company’s U.S. OTC Markets listed MMEDF shares closed the day, even at $0.23 per share. Investors should be aware that MindMed’s OTC listing is currently quoted on the Grey Market, so liquidity will likely be low until the company gets its paperwork completed to uplist to the OTCQB or OTCQX in the future. 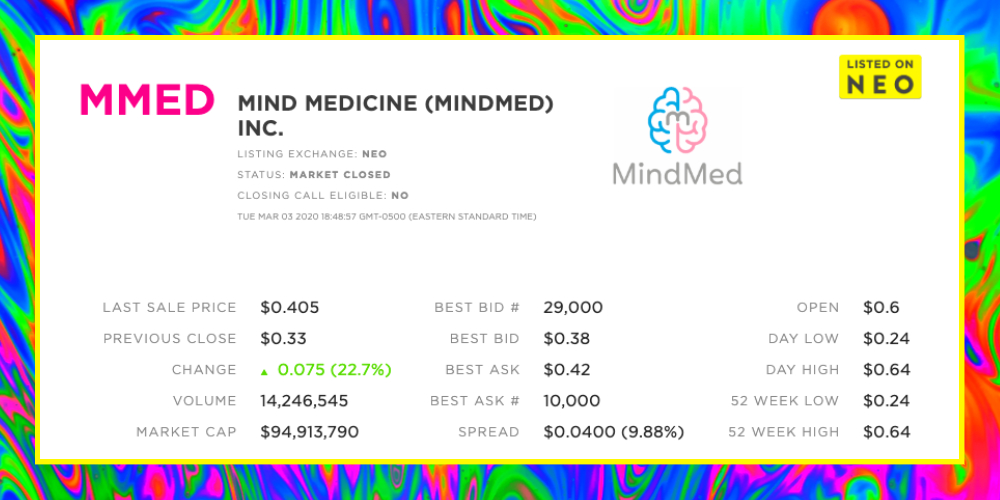