MedMen (CSE: MMEN) (OTCQX: MMNFF) released its Q4 earnings yesterday after the closing bell and the “Apple Store of Weed” disappointed investors once again. MedMen reported revenue of $42 million for the fourth quarter, an increase of 104% year-over-year. Full-year revenue came in at $130 million, up 227% year-over-year.

MedMen continued burning through cash at an alarming rate as the company’s general and administrative expenses ballooned from $98.18 million in 2018 to a whopping $244.05 million in 2019. As you can see from the images below, MedMen spent over $95 million on salaries and benefits, $32 million on share-based compensation and $7.7 million on travel and entertainment. Private jets and Ripper Magoos can add up quickly. Total key management compensation came in at over $43 million. 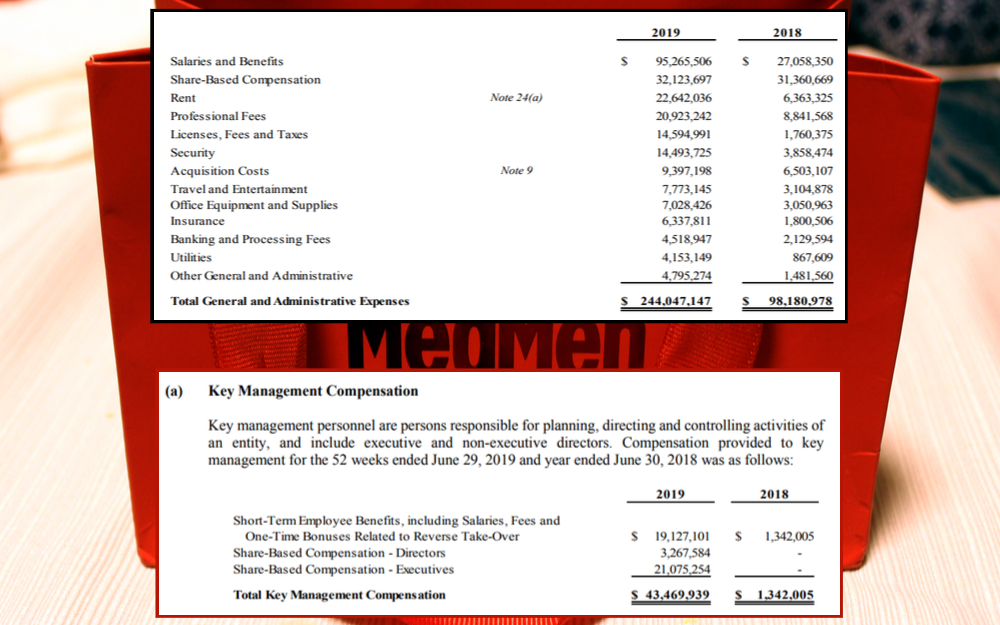 For a company nowhere near being EBITDA positive, this type of absurd spending should be illegal. MedMen shareholders have been royally screwed while management flys around the globe on private jets. There isn’t even a point in going over any more of MedMen’s numbers. I think you get the picture here. Let’s hear what management has to say.

“Fiscal 2019 was a transformative year for MedMen, with over two million completed retail transactions to date and revenues increasing 227% year-over-year. Our success was due, largely in part, to our loyal customer base. Throughout the year, we served over one million customers from all 50 states and more than 100 countries. In California, the largest cannabis market in the world, MedMen surpassed a record $110 million in annualized run-rate retail revenue,” said MedMen Co-Founder and CEO Adam Bierman.

“While industry tailwinds propelled us forward over the past twelve months, changing macroeconomic conditions have led us to refocus our strategy, to reevaluate our assets and to determine where it makes most sense to allocate capital going forward. As we progress into the next fiscal year, our go-forward strategy will, therefore, focus on three key objectives: optimizing our current retail assets, unlocking the further potential of our factories, and leveraging our omnichannel strategy. As we bring all of our factories online and up to full capacity, and simultaneously optimize our current retail assets across our core geographic markets, we continue on our path toward profitability,” added Bierman.

This morning, MedMen announced it has made certain amendments to its $250 million credit facility with Gotham Green Partners. The amendments to the facility included certain provisions taken to minimize dilution due to the current poor market conditions. Both sides have also agreed to adjust the size of tranche 3 and 4 which will now consist of $10,000,000 and $115,000,000 in available credit respectively. The timing of tranche 3 was also adjusted so that funds will be available within 30 days instead of the originally planned date in December of this year.

Another adjustment was made to tranche 4 to require both parties’ consent before funding can take place. Certain financial covenants under the facility were also modified to provide MedMen with additional balance sheet flexibility. These modifications include “a reduction in required minimum cash balances, removal of restrictions on equity issuances and an additional ability to spin-out or borrow against certain non-core assets, in addition to sales and indebtedness that were permitted prior to the amendment.”

Shares of MMEN stock plummetted today in response to yesterday’s after-hours earnings report. MMEN closed trading today at $1.42 per share, down 21.11% on the day.