Liberty Health Set to Open Dispensary in North Miami, Bringing Total to 9 Dispensaries in Florida: Liberty Health Sciences Inc. (CSE: LHS) (OTCQX: LHSIF), a provider of high quality cannabis, announced today that it will be holding a grand opening celebration on Tuesday, February 19 from 10 a.m. to 7 p.m. for its new dispensary opening in North Miami, and increasing the number of the Company’s dispensaries in Miami to two, and in the state of Florida to nine.

“Liberty continues to fulfill its promise to provide our Florida customers with access to the highest-quality medical marijuana throughout the state, including increasing our capacity to provide premium quality products developed at our Liberty 360 Innovation Campus in Gainesville, where we expect to add an additional 160,000 square feet of cultivation space this year,” said George Scorsis, CEO of Liberty. “Our new North Miami location will offer the community state-of-the-art waiting and consultation rooms for medical marijuana educational meetings and provide access to Liberty’s line of superior cannabis products in a 4,270 square-foot modern and safe environment to which our customers have become accustomed.” The Cannabis Investor

“Aurora continues to execute strongly across all of its market segments, as demonstrated by the 83% revenue growth over last quarter and the significant increase in confirmed production results,” said Terry Booth, CEO of Aurora. “Our brands continue to resonate extremely well in the consumer market, our patient numbers continue to increase steadily, and we have maintained our market leadership in Germany and other key international markets. We are experiencing exceptional demand for our Canadian medical and consumer products, as well as sustained strong demand internationally. With our Aurora Sky and MedReleaf Bradford facilities ramping up production as anticipated and our other licensed facilities operating at full capacity, we are reiterating our earlier guidance of achieving sustained EBITDA positive results from the second calendar quarter of this year (our fiscal Q4).” The Cannabis Investor

Liberty Health Announces Results of Independent Short Seller Report Investigation: Liberty Health Sciences Inc. (CSE: LHS) (OTCQX: LHSIF), a provider of high quality cannabis, announced that it has received the report of its independent directors regarding allegations made by Hindenberg Research in its report dated December 6, 2018.

The principal conclusions of the Directors’ Report were:

TransCanna’s Acquisition of GoodFellas Will Include Proprietary Brand Called Simple:

TransCanna Holdings Inc.(CSE: TCAN) (FSE: TH8) is pleased to announce that subject to completing of the acquisition of Goodfellas Group, LLC (“Goodfellas”), the company will, in addition to the branding and marketing business of Goodfellas, acquire its existing in-house brand “Simple”. Simple has created as a user friendly, smart cannabis package called the Simple Kit.

“An exceptional product for the times. We’re witnessing an unprecedented number of patients and consumers participating with cannabis. The Simple Kit is innovative, simple and easy to use. Conditional on the acquisition we look forward to expanding the Simple Kit throughout California,” states Jim Pakulis, CEO of TransCanna. The Cannabis Investor

“The advantage of a strengthened Canopy Rivers/Canopy Growth relationship is that it accelerates and derisks execution for invested companies,” said Bruce Linton, Founder and Co-CEO, Canopy Growth. “The strength of the Canopy Rivers team, coupled with their selective approach to business development and execution of strategic investments, creates value for shareholders and for Canopy Growth.” The Cannabis Investor

“The expansion of our European senior leadership team strengthens Tilray’s ability to enter into new addressable markets and solidify our presence in existing European markets,” says Brendan Kennedy, Tilray CEO. “Sascha brings an unmatched level of expertise from his years of experience in the European and global pharmaceutical industry and we’re very pleased to welcome him to our team.” The Cannabis Investor

Aurora Cannabis Completes First Commercial Cannabis Oil Export to the U.K.: Aurora Cannabis Inc. (TSX: ACB) (NYSE: ACB) (Frankfurt: 21P; WKN: A1C4WM) announced today that it has completed its first commercial export of cannabis oil to the United Kingdom (UK) and the product has been successfully dispensed from a pharmacy. Authorities there recently granted the Company approval for its first shipment of medical cannabis into the UK from Canada under its new legal framework that came into effect on November 1, 2018.

“Being one of the first Canadian companies to commercially supply cannabis-based medicines into the UK under the new legal framework reflects Aurora’s ability to do business in international markets that have complex and evolving regulatory systems,” said Neil Belot, Chief Global Business Development Officer. “Aurora continues to grow its international footprint, which now includes the UK, a country with a population of approximately 66 million people. Regardless of the barriers, we may be faced with, we are focused on helping patients around the world get access to the medicine they need.” The Cannabis Investor 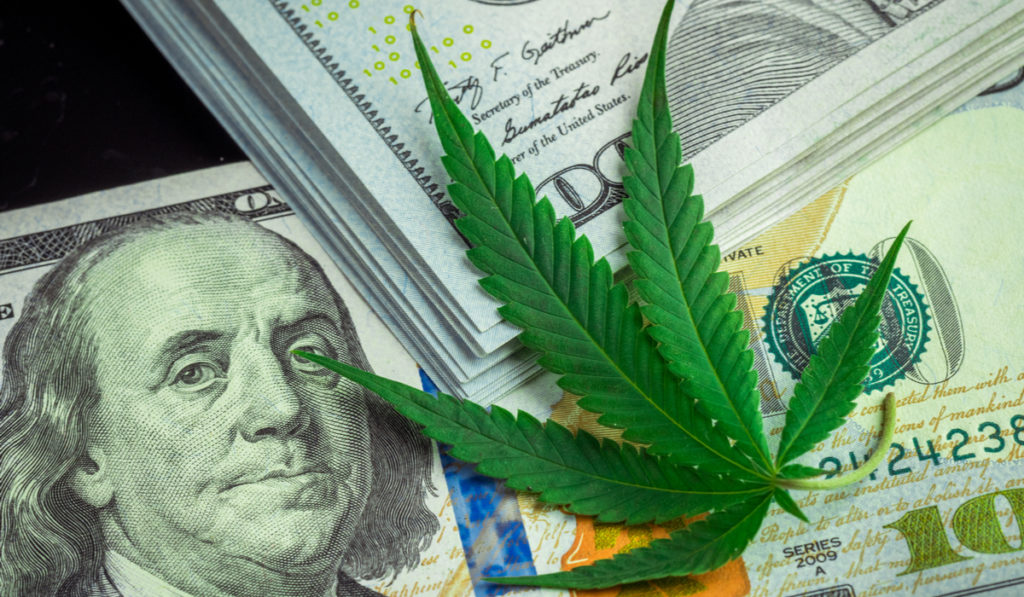 MediPharm Labs Signs $35 Million Private Label Cannabis Oil Sale Agreement with Option for Additional $13.5 Million: MediPharm Labs Corp. (TSXV: LABS) (OTCQB: MLCPF) announced that its wholly-owned subsidiary, MediPharm Labs Inc., has entered into a significant sales agreement with a leading Licensed Producer to supply approximately $35 million of private label purified cannabis oil concentrates. Under the terms of the agreement, the Licensed Producer will immediately purchase upfront $7.66 million of cannabis oil concentrate from MediPharm Labs’ inventory in February 2019. In addition, the Licensed Producer will purchase a minimum of $27 million of cannabis oil concentrate over a 12-month period commencing March 2019, with an option to purchase an additional $13.5 million over the same period, bringing the total potential aggregate value of the agreement to over $48 million to February 2020. Globe Newswire

Plus Products Announces an Increase to the Previously Announced Private Placement to $25 Million: Plus Products Inc. (CSE: PLUS) (OTCQB: PLPRF) is pleased to announce that due to strong demand from investors, it has increased the maximum size of the previously announced private placement led by Canaccord Genuity Corp. involving a syndicate of agents. Pursuant to the revised terms of the offering, the Company has engaged the Agents to sell, on a “best efforts”, placement basis, up to C$25 million of convertible note units (the “Units”) of the Company at a price of C$1,000 per Unit. EIN News

New York Cannabis Trade Group Kicks out MedMen After Former CFO Alleges Racism, Corruption: The New York Medical Cannabis Industry Association is kicking out MedMen (CSE: MMEN) (OTCQX: MMNFF) following accusations of racist and sexist remarks, as well as allegations of financial corruption among executives, according to the New York Daily News. The association has asked MedMen to resign, but they are ready to expel the company if they refuse to do so, the News said.  Last month, MedMen’s former CFO James Parker filed a lawsuit against the company in Los Angeles Supreme Court.  In the lawsuit, Parker said he was “confronted with an environment replete with racial, homophobic and misogynistic epithets and slurs, drug and alcohol abuse [and] personal humiliation occasioned by the words and deeds of the CEO and president of the company.” MedMen spokesman Daniel Yi told the Daily News “We have already addressed these allegations publicly. They are patently false. They were made by a disgruntled employee and are untrue.”  CEO Adam Bierman and other executives used MedMen to ran up huge expenses, according to the lawsuit. Benzinga

Biome Grow Announces MOU to Purchase up to 20,000 kg Per Year of Hemp-Grown CBD Extract from Industrial Hemp Grower CBD Acres: Biome Grow Inc. (CSE: BIO) (OTCQB: BIOIF) announced an MOU providing Biome with preferential access to a high quality and low-cost supply of Cannabidiol concentrate from CBD Acres Manufacturer Inc. The MOU is for a period of five years pursuant to which Biome may acquire up to 20,000 kilograms per year of sun-grown, hemp-based CBD extract from CBD Acres using its unique Nano lipid, solventless extraction process. Globe Newswire

Aurora Cannabis Announces Construction of Aurora Polaris: Aurora (TSX: ACB) (NYSE: ACB) announced that the company’s construction of a 300,000 square foot expansion at the Edmonton International Airport is progressing well. The new facility, named Aurora Polaris, is intended to serve as Aurora’s centre of excellence for the industrial-scale production of higher margin, value-added products, such as edibles which Health Canada regulations propose to permit from October 2019 onwards. Aurora Polaris will allow for enhanced capabilities for the company’s logistics and warehousing needs required to serve ever-increasing global requirements. Construction of the facility is anticipated to be completed in late 2019. Characteristics and highlights for the new logistics operation include:

Canntab Enters into Supply Agreement with FSD Pharma and World Class Extractions on Organic Hemp Deal: Canntab Therapeutics Limited (CSE: PILL) (OTCPK: TLFTF), has entered into a supply agreement with FSD Pharma Inc. (CSE: HUGE) (OTCQB: FSDDF) and World Class Extractions Inc. to purchase hemp flower from Thomas Elcome. Pursuant to the agreement, the Purchasers have agreed to buy approximately 1,000 kg of the Supplier’s 2018 hemp crop at a purchase price of $100.00 per kg per 1% of CBD extracted from the flower. Working alongside Canntab and World Class, FSD Pharma will extract CBD from the organic hemp obtained in the purchase order. The Purchasers will process the hemp flower into gel capsules and tablets at the FSD Pharma facility in Cobourg, Ontario. This facility is currently being transformed into a large hydroponic indoor cannabis production and processing facility, with multiple business units co-supporting each other and operating under a single roof to exploit economies of scale and operational efficiencies. Globe Newswire

TerrAscend Establishes US Retail Footprint: TerrAscend (CSE: TER) (OTCQX: TRSSF) announced the signing of definitive securities purchase agreements facilitating a significant investment in three entities in California operating the award-winning retail dispensary brand known as “The Apothecarium”.  The purchase agreements also include the acquisitions of a vertically integrated operation in Nevada with cultivation, edible manufacturing, and an Apothecarium retail location, as well as Valhalla Confections, a provider of leading premium edible products. TerrAscend has agreed to pay cash consideration of US$73.7mm plus proportionate voting shares in the equity of TerrAscend equivalent to 7.325mm TerrAscend common shares, which, based on the price of TerrAscend common shares from Friday’s close, would represent total consideration of approximately US$118.4mm.  The combined California and Nevada operations had 2018 revenues in excess of US$45mm. PR Newswire

Green Growth Brands Partners with Simon Property Group to Launch America’s First Chain of CBD Shops: Green Growth Brands (CSE: GGB) (OTCQB: GGBXF) announced that it has entered into an agreement through which the company will gain access to 108 prime shop locations in U.S. malls owned and operated by the Simon Property Group, Inc. (NYSE: SPG).  Pursuant to the arrangement, GGB will further expand its chain of CBD-infused personal care product shops under the Seventh Sense Botanical Therapy brand and other GGB brands. The first shop is expected to open in March 2019 at Castleton Square Mall in Indianapolis, Indiana. The remaining shops will be opened over the course of 2019. Morningstar

Trulieve Announces Partnership to Bring Cannabis-Infused Edibles, Concentrates to Florida: Trulieve (CSE: TRUL) has signed an agreement with Colorado-based Love’s Oven, LLC to bring their edible cannabis-infused baked goods, craft concentrates, and other products to Florida’s growing patient base. Based in Denver, Colorado, Love’s Oven is a family-run cannabis company committed to creating high-quality products, using all-natural ingredients sourced locally and organically, and using a proprietary extraction method designed to ensure consistency and effectiveness. Over the past decade, Love’s Oven has built a reputation for crafting clean, natural products while remaining innovative, approachable, and potent. Newswire.ca