Aleafia Health Study Indicates 45% of Patients End Benzodiazepine Use Following Medical Cannabis Treatment: Aleafia Health Inc. (TSXV: ALEF) (OTCQX: ALEAF), announces today what it believes to be the first study reporting reduced benzodiazepine use among patients initiated and monitored on medical cannabis. Benzodiazepines, a class of psychoactive drugs, include the most common sedatives and anti-anxiety medications.

The retrospective study, published in Cannabis and Cannabinoid Research, a peer-reviewed journal, is entitled “Reduction of Benzodiazepine Use in Patients Prescribed Medical Cannabis.” It found that 45.2 percent of patients regularly consuming benzodiazepines had stopped taking the medication within approximately six months of beginning medical cannabis. These patients, following prescription cannabis use, also reported decreased daily distress due to medical conditions. The Cannabis Investor

Organigram Posts Record Q1 Net Revenue of $12.4 Million, An Increase of 287%: Organigram Holdings Inc. (TSXV: OGI) (OTCQX: OGRMF), the parent company of Organigram Inc., a leading licensed producer of cannabis, is pleased to announce its first quarter results for fiscal 2019. The Company’s fiscal first quarter encompasses operations up to and including November 30, 2018 and as a result, includes the impact on revenue of adult-use recreational cannabis for part of the quarter, which was legalized on October 17, 2018.

“The first quarter of 2019 is just the start of what we expect to be a year of tremendous growth,” said Greg Engel, the Company’s Chief Executive Officer. “We’ve always believed the Moncton Campus would be a competitive advantage for us being able to produce high-quality indoor-grown product at low cash cost of cultivation.  Our first quarter results confirmed that as we reported an adjusted gross margin of 71%.” The Cannabis Investor

TransCanna to Acquire Goodfellas Group: TransCanna Holdings Inc. (CSE: TCAN) (XETR: TH8) is pleased to announce that it has signed a non-binding Letter of Intent to acquire Goodfellas Group, LLC, a full-service advertising and marketing agency for the cannabis and hemp industries, from which the Company is already acquiring 23 branding agreements. The acquisition price will be derived from two times the previous 12 months revenues, at the time of execution of definitive agreements, as set forth in the audited financial statements of Goodfellas. 60% of acquisition price will be paid at closing, of which ½ will be payable in cash and ½ will be payable through the issuance of the Company’s common shares, and the remaining 40% of the acquisition price will be paid 12 months following the closing. The Company also anticipates retaining key members of the Goodfellas staff. The Cannabis Investor

HEXO Closes $57.5 Million Common Share Offering: HEXO Corp. (TSX: HEXO) (NYSE-A: HEXO) is pleased to announce the closing of its previously announced marketed offering of 8,855,000 common shares at a price of C$6.50 per share for aggregate gross proceeds of C$57,557,500, which includes the exercise of the full over-allotment option of 1,155,000 common shares. The Company will use the net proceeds from the Offering for general corporate purposes, including funding the Company’s global growth initiatives and research and development to further advance the Company’s innovation strategies. The Cannabis Investor

This raises the total flowering room space from 90,000 sqft to 120,000 sqft and 7ACRES’ annual production capacity estimate increases from approximately 13,300kg to 17,500kg. With further production efficiencies and the completion and licensing of all 25 flowering rooms, the potential capacity of the 7ACRES facility is anticipated to reach approximately 50,000kg per year. Newswire.ca

Plus Products Announces Private Placement of Unsecured Convertible Note Units for up to C$20 million: Plus Products Inc. (CSE: PLUS) (OTCQB: PLPRF) is pleased to announce that it has entered into an agreement with a syndicate of agents led by Canaccord Genuity Corp. (the “Agents”) with respect to a private placement of unsecured convertible note units. Pursuant to the Offering, the Company has engaged the Agents to offer to sell, on a “best efforts”, private placement basis, up to C$20 million of convertible note units (the “Units”) of the Company at a price of C$1,000 per Unit, for aggregate gross proceeds of up to C$20 million. Newswire.ca

Emerald Health Therapeutics’ Licensed Endo Product Line Gains Boost with Entry into Whole Foods Market Stores Across US: Emerald Health Therapeutics, Inc. (TSXV:EMH) (OTCQX: EMHTF)  today announced that its joint venture partner, San Diego-based Emerald Health Bioceuticals, has launched its award-winning Endo products in Whole Foods Markets across the United States, highlighting the unique positioning and opportunity for this product line when it is launched in Canada in 2019.  The joint venture, called Emerald Health Naturals, secured Canadian distribution rights for this product line that was developed to support the body’s endocannabinoid system, but which does not contain cannabis. Canadian retailers have not been announced. Globe Newswire

Cultivation License Secured for TGOD’s Operations in Denmark: The Green Organic Dutchman Holdings Ltd. (TSX: TGOD) (OTCQX: TGODF) is pleased to announce that the Danish Medicines Agency, the Government body responsible for issuing cannabis related licenses, has granted an initial cannabis business authorization to TGOD’s joint venture production partner Knud Jepsen. This licence will allow TGOD’s JV partner Kund Jepsen to immediately begin importation of starting materials and to begin research and development related to the creation of elite cannabis genetics. Per the terms of the recently completed definitive agreement, Knud Jepsen will submit a request to the Danish Medicines Agency for the assignment of this licence to the TGOD-Knud Jepsen Danish joint venture, a process that is already underway and expected to be completed within the coming weeks. Newswire.ca

GTEC Announces Brokered Private Placement of up to $5,005,000 led by Sprott Capital Partners LP: GTEC Holdings Ltd. (TSXV: GTEC) (OTCQB: GGTTF) is pleased to announce that it has entered into an engagement letter pursuant to which GTEC has appointed Sprott Capital Partners LP, as lead agent, to sell, by way of a private placement, on a “commercially reasonable efforts” basis, units of the Company at a price of $0.55 (the “Issue Price”) per Unit, for gross proceeds of up to $5,005,000 (the “Offering”). Globe Newswire 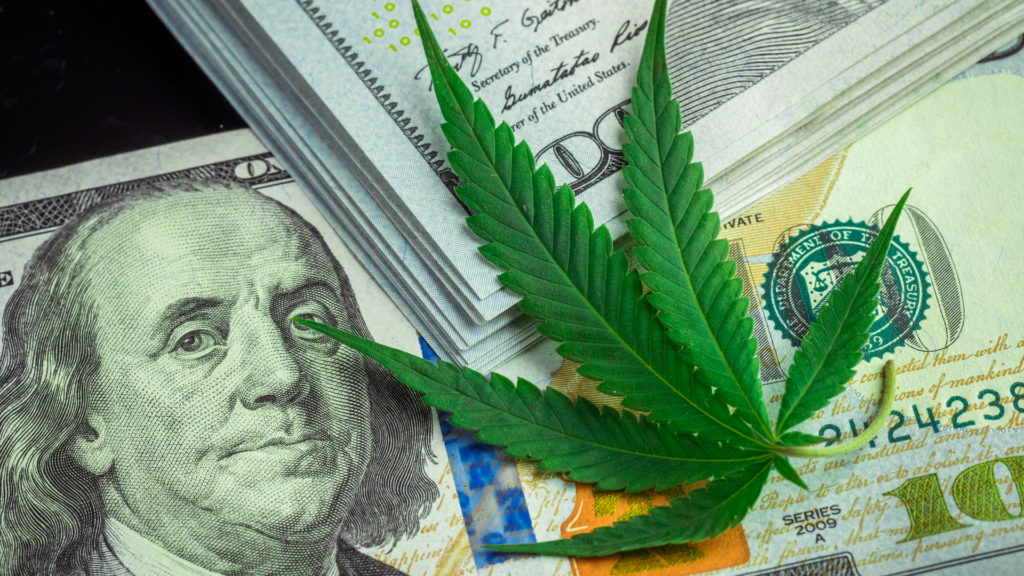 Aurora Cannabis Closes Offering of Convertible Senior Notes: Aurora Cannabis Inc., (TSX: ACB) (NYSE: ACB) announced that it has closed its previously announced offering of 5.5% convertible senior notes due 2024 for gross proceeds of US$345 million (including US$45 million pursuant to the exercise of the initial purchasers’ over-allotment option). The notes are unsecured and will mature on February 28, 2024. The notes bear cash interest semi-annually at a rate of 5.5% per annum. The initial conversion rate for the notes is 138.37 common shares per US$1,000 principal amount of notes, equivalent to an initial conversion price of approximately US$7.23 per common share. www.newswire.ca

Cronos Group Inc. Announces Closing of $65 Million Credit Facility: (NASDAQ: CRON) (TSX: CRON) announced that it has entered into a credit agreement with Canadian Imperial Bank of Commerce (“CIBC”), as administrative agent and lender, and the Bank of Montreal, as lender in respect of a $65 million secured non-revolving term loan credit facility. The Company intends to use the funds available under the Credit Facility to repay the Company’s existing loan facility with Romspen Investment Corporation and for general corporate purposes pending the closing of the Company’s previously announced equity investment by Altria Group, Inc. PR Newswire

Village Farms Int’l Expands Pure Sunfarms’ Licensed Cannabis Production Area to 825,000 Square Feet: Village Farms (TSX: VFF) announced that its 50%-owned joint venture for large-scale, low-cost, high-quality cannabis production, Pure Sunfarms, received from Health Canada the sixth amendment to the cultivation license for its 1.1 million square foot greenhouse in Delta, BC (the Delta 3 facility). This amendment permits Pure Sunfarms to expand its cannabis production area by approximately 138,000 square feet to a total of approximately 825,000 square feet.  With this amendment, the entirety of the first three quadrants of the 1.1 million square foot Pure Sunfarms facility is now licensed for cultivation. “The Pure Sunfarms cannabis operation continues to execute on plan, steadily expanding production towards its target of reaching full run rate annual production of 75,000 kilograms in the first half of this year. www.prnewswire.com

Delta 9 sells interest in Calgary facility to Westleaf for $14.95 Million of Westleaf Shares: Delta 9 (TSXV: NINE) announced that it has entered into a definitive agreement to sell its 50% interest in the Delta West extraction facility to Westleaf Inc. (TSXV: WL). Under the Definitive Agreement, Westleaf has agreed to issue an aggregate of 5,600,000 common shares in the capital of Westleaf in consideration for the acquisition of Delta 9’s 50% interest in the project. Closing of the transaction is expected to occur on or about January 31, 2019. This move will allow Delta 9to streamline  allocation of capital and focus on continued expansion of  Winnipeg based cultivation facilities, continued expansion of Delta 9 Cannabis Stores unit, and explore other strategic investments in the industry.” www.prnewswire.com

Cigarette Giant Philip Morris Decides Not to Invest in Cannabis: Last month Big Tobacco company Altria Group, the makers of Marlboro, made a $2.4 billion investment into cannabis. Another Big Tobacco giant Philip Morris announced that they would not be investing in cannabis at this time. The company’s CEO Andre Calantzopoulos said there were several factors that led to this decision. Calantzopoulos noted that international markets don’t regulate marijuana the same way, and that could pose a logistical issue for the company. He also said the company is focused on its IQOS heated-tobacco system that they claim is better than normal cigarettes. In a somewhat weird statement, Calantzopoulos also said he wasn’t “comfortable” with the science behind cannabis and believes more research needs to be done.  www.civilized.life

Marijuana Firm Caliva Closes $75 Million Funding with Assist from NFL Great Joe Montana:  Caliva, a vertically integrated cannabis company based in California, closed its first round of funding, snagging $75 million the firm will use to expand its product offerings as well as its retail footprint in the Golden State. Former Yahoo CEO Carol Bartz and Super Bowl Most Valuable Player and Hall of Fame quarterback Joe Montana were among those participating in the funding. Bartz will serve on Caliva’s board. Caliva, which employs more than 440, operates a cultivation facility and store in San Jose. The company also sells branded cannabis, joints and vape pens at more than 200 dispensaries across California, and has its own delivery service in the Bay Area. mjbizdaily.com

Flowr Expects to More than Double Current Capacity with Additional Grow Rooms: The Flowr Corporation (TSXV: FLWR) (OTCQB: FLOOF) announced that it received approval from Health Canada to open additional grow rooms at its Kelowna 1 cultivation facility.  The company expects to begin growing in a portion of the newly approved rooms immediately. The company expects to have the facility complete with a total of 20 grow rooms prior to the end of the third quarter of this year.  When complete, Flowr expects the approximately 85,000 square foot facility to produce at a capacity of approximately 10,000 kilograms of premium cannabis flower on an annualized basis. globenewswire.com

All JS Greenspace LLC Announces Commitment to Purchase Up to $150 Million Securities of Green Growth Brands Inc.: All Js Greenspace LLC announced today that, in connection with Green Growth Brand Inc.’s proposed offer to purchase all of the issued and outstanding common shares of Aphria Inc. , it entered into a commitment letter with GGB on January 22, 2019 whereby All Js agreed to purchase up to C$150 million common shares of GGB at a price of C$7.00 per common share. In consideration of the commitment provided under the Commitment Letter, GGB has agreed to pay All Js a non-refundable commitment fee of C$7.5 million, which is payable by GGB through the issuance of 2,504 PV Shares of GGB at a price of C$2,995 per PV Share. www.newswire.ca