Here on the Marijuana Minute, you will find the top stories from around the industry in this week’s Cannabis Industry News Recap for the week of May 6th – 12th, 2019.

In an attempt to reduce the cannabis shortages throughout Canada, Health Canada announced today their plans to introduce changes to the way cannabis licenses are issued.

Effective immediately, Health Canada will require new applicants planning to sell, process or cultivate medical cannabis in Canada to have a fully built site. The site must also meet all of the Cannabis Regulations requirements at the time of the application.

“This is a game changer,” said Matt Maurer, a cannabis lawyer with Torkin Manes LLP, in a phone interview with BNN Bloomberg.

More stars are making their love cannabis well known, as they have been launching their brands throughout the course of 2019. On Tuesday, April 30th, the Hall of Flowers, an annual trade show that features the top cannabis brands in the world had some great surprises for marijuana enthusiasts. Among the lines, Rapper and Grammy award winner, Post Malone’s new brand Shaboink brought in a lot of attention. Shaboink aims to focus on premium lines of flowers and vapes.

The Initiated Ordinance 301, or the Denver Psilocybin Mushroom Initiative, was approved Tuesday by less than 2,000 votes, according to preliminary results from the elections division. About 50.5% of voters supported the ordinance, while about 49.4% were against it, election officials said.
Read full CNN article here
Top Congressional Democrats Announce Bill To Federally Deschedule Marijuana
Senate Minority Leader Chuck Schumer (D-NY) and Rep. Hakeem Jeffries (D-NY) announced on Thursday that they will be reintroducing legislation to federally deschedule marijuana and encourage minority and women participation in state-legal markets.

The bills are the latest in a series of bold reform proposals that have been filed this Congress, but Schumer’s backing is particularly emblematic of the mainstreaming of marijuana, as the top Senate Democrat has historically embraced punitive drug policies and is now—for the second year in a row—introducing legislation to remove cannabis from the Controlled Substances Act altogether.

A new study suggests Canadians aren’t embracing cannabis with the same pre-legalization enthusiasm, and uncertainty is also growing over this fall’s rollout of edibles.

The Dalhousie University study “Edibles and Canadian consumers’ willingness to consider recreational cannabis in food or beverage products: A second assessment,” was released on Thursday.

As Gov. Steve Sisolak signed what he called a transparency law, the state Department of Taxation posted to its website what it said are roughly 10,400 documents that include the names of winners and losers for adult-use business licenses in Nevada.

The Alabama Senate approved a bill to legalize medical marijuana on Thursday.

In a 17 to 6 vote, the chamber cleared the legislation, which would allow patients 19 and older with certain conditions to obtain a medical cannabis card that would allow them to use, possess and purchase marijuana from licensed dispensaries.

It would also establish an Alabama Medical Cannabis Commission to oversee the program. Patients would have to have tried traditional treatment options and also be subject to random drug testing.

Health food and hemp industry groups are calling on Ottawa to change the regulations for CBD to treat the cannabinoid as a natural health product rather than a drug.

The Canadian Health Food Association and the Canadian Hemp Trade Alliance say CBD, a non-intoxicating compound which can be derived from cannabis and hemp, should be removed from the prescription drug list.

The marijuana industry is booming in the United States.

From the $52 billion in sales the industry posted to the 76% increase in cannabis jobs this year, there are plenty of statistics to show marijuana’s startling contributions to the US economy.

Marijuana initiatives have swept through state legislatures in recent years. Recreational marijuana use is legal in 10 US states, while medicinal marijuana is legal in 33. Illinois became the most recent state to weigh the topic when Gov. JB Pritzker introduced a bill to legalize the drug on Saturday.

The Netherlands is laying the groundwork to become the first country in Europe to allow commercial production of adult-use marijuana – although initially the program would be considered an experiment.

Under the Dutch plan, a limited number of companies would be allowed to legally grow marijuana to supply coffee shops in the country that would, in turn, sell the products to consumers.

The Nebraska Legislature’s Judiciary Committee passed a bill to legalize medical marijuana on Friday, and it will now head to the full legislature for consideration.

The legislation, sponsored by Sen. Anna Wishart (D), would establish a system allowing patients suffering from a wide range of conditions to use, possess and purchase certain amounts of cannabis from licensed dispensaries.

Phoenix-based 4Front Holdings, a vertically integrated cannabis group, has secured a $50 million loan to help it build cultivation and production facilities connected with the company’s expected merger with Cannex Capital.

The deal with Vancouver, British Columbia-based Cannex is awaiting final approval from U.S. antitrust authorities. The resulting combined entity is to be named 4Front Ventures.

Some marijuana businesses turned away when Nevada awarded 61 new dispensary licenses last December are ratcheting up pressure in court for the state to redo the selection process.

A filing this week in a lawsuit filed by Las Vegas pot retailers Planet 13 and The Dispensary accuses state tax officials of improperly having temporary employment service Manpower screen the 462 applications the state received.

The lawsuit by MM Development Co. and LivFree Wellness is among several in state court seeking to freeze the awarding of new licenses until applicants’ names are made public and the selection procedure is reviewed. 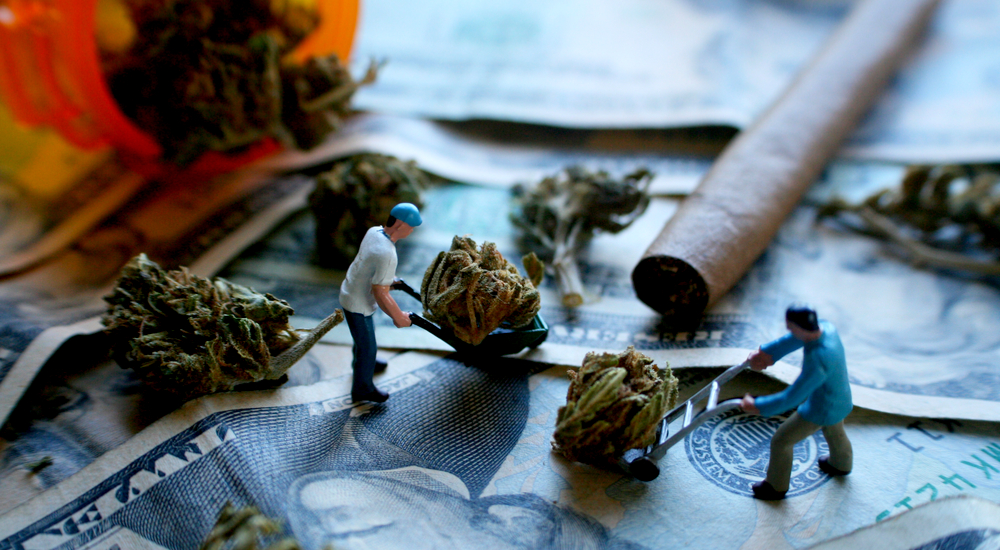 House committee votes on two bills concerning medical marijuana and military veterans that were scheduled for Wednesday have been canceled, with the chair of the panel planning to hold a later hearing on the legislation instead.

The reasoning behind the cancellation isn’t entirely clear, nor is it known at this point when the hearing will be held.

With Europe fast becoming a cornerstone in the global medical marijuana industry, business leaders from dozens of countries descended on Copenhagen to discuss emerging opportunities in the burgeoning market.

Capital markets, partnerships and more were on the docket Monday at Marijuana Business Daily’s inaugural European Cannabis Symposium in Denmark, one of the countries leading the medical marijuana charge.

The bank reported that it held 382,352 shares of Aphria (TSX: APHA) (NYSE: APHA) as of its latest disclosure with the US Securities and Exchange Commission, as per a Finance Daily report on Saturday (May 4). Bank of America has taken decisive steps forward in the marijuana industry as it recently launched its coverage of the space.

Bank of America’s subsidiary BofA Merrill Lynch is acting as an underwriter for CannTrust Holdings (TSX: TRST) (NYSE: CTST). Last Thursday (May 2), the Canadian cannabis firm priced an offering at US$5.50 per share, seeking to gain gross proceeds of approximately US$170 million.

Interest for agreements between Canadian firms and US operators have seen increasing attention from investors thanks to the Canopy Growth (TSX: WEED) (NYSE: CGC) deal with MSO Acreage Holdings (CSE: ACGR.U) (OTCQX: ACRGF).

Thirty members of the House of Representatives sent a letter to the leaders of the Drug Enforcement Administration and Department of Justice on Tuesday, calling on the federal agencies to speed up research into the medical uses of cannabis. The letter was signed by a bipartisan group of lawmakers including cannabis advocate and Democrat Rep. Earl Blumenauer of Oregon and three of the nearly two dozen candidates for the Democratic Party’s nomination for president.

Florida’s medical marijuana market is booming, with an average of nearly two dispensaries opening each week across the state. The number of enrolled patients recently zipped past the 200,000 mark with more than 10,000 new patients signing up each week.

The five dominant players are (current number of dispensaries, % of total dispensaries in state):

On May 7, Maine held a public hearing on a trio of bills that would clear criminal and civil records related to marijuana. The hearing, which took place before the Legislature’s Judiciary Committee, heard testimony from private citizens and those working in Maine’s developing legal industry. And while the state gets set to release the final version of its regulatory plan for that industry, Tuesday’s public hearings provided an opportunity to discuss the social justice aspects of Maine’s 2016 legalization of adult-use cannabis.

The owner of a London cannabis retail store that still isn’t open has been penalized $50,000 by the province’s pot regulator.

An Ontario numbered company behind Tweed, located at 1025 Wellington Rd. S, is one of seven store owners forfeiting an additional $25,000 to the Alcohol and Gaming Commission of Ontario (AGCO) for failing to be in business by April 30, a spokesperson for the regulator confirmed.

The Texas House advanced a bill Monday that would expand the list of debilitating conditions that allow Texans to legally use medical cannabis.

House Bill 1365 would add Alzheimer’s, Crohn’s disease, muscular dystrophy, post-traumatic stress disorder, autism and a bevy of other illnesses to an existing state program that currently applies only to people with intractable epilepsy who meet certain requirements.

The federal Alcohol and Tobacco Tax and Trade Bureau issued a memo concerning the legality of adding CBD to alcoholic beverages.

Mexico’s government released a plan calling drug prohibition “unsustainable” and suggesting that consumers should be provided with a “supply of doses with prescription.” The document talks about creating “sustainable economic alternatives” for people working in the currently illegal drug market.

Republican Gov. Brian Kemp has signed legislation into law to facilitate the licensed production and distribution of oils and other products containing limited amounts of plant-derived THC.

House Bill 324 (aka Georgia’s Hope Act) establishes a regulatory commission to oversee the eventual “production, manufacturing and dispensing” of products possessing specified quantities of plant-derived THC to qualified patients. The law allows for the licensing of up to six privately owned cultivation operations, and also seeks collaboration with the University of Georgia in the manufacturing of THC-infused extracts and oils.

But June’s a possibility.

Louisiana State University’s agricultural center, which oversees one of two state-sanctioned marijuana growers, said it now expects to have some cannabis products ready for testing by state regulators at the end of May.

China Cashes in on the Cannabis Boom

China has made your iPhone, your Nikes and, chances are, the lights on your Christmas tree. Now, it wants to grow your cannabis.

Two of China’s 34 regions are quietly leading a boom in cultivating cannabis to produce cannabidiol, or CBD, the nonintoxicating compound that has become a consumer health and beauty craze in the United States and beyond.