Study: Marijuana Would Provide 24,000 Jobs, $1B to Illinois: Illinois voters just elected a new governor who supports legalizing, regulating, and taxing marijuana — and a new study indicates that the state would reap significant economic benefits if lawmakers follow through in 2019. According to an analysis from the Illinois Economic Policy Institute and the Project for Middle Class Renewal at the University of Illinois, fully legalizing cannabis would bring in 24,000 jobs, more than $500 million in tax revenue and infuse about $1 billion into the state economy overall by 2020. Legalization would also reduce law enforcement costs to the tune of about $18 million per year, the study found. www.marijuana.com

Texas Lawmaker Files Marijuana Decriminalization Bill: Possessing small amounts marijuana would no longer come with the threat of jail time if a Texas Democratic representative—and the state’s Republican Party—have their way. On Monday, the pre-filing period for the upcoming 2019 legislative session, which begins in January, kicked off, and one of the first bills put forward is a proposal to decriminalize cannabis. “Civil penalty legislation is the first thing I’ve filed on the first day of filing for the 86th Session. There’s been an incredible swell of bipartisan support since last session, and the official Texas Republican and Democratic platforms both approve of this kind of reform now,” Rep. Joe Moody, the bill’s sponsor, said in a press release. “I’m optimistic that this will be the session we finally see smarter, fairer marijuana laws in Texas.” In June, the Texas Republican Party adopted a platform plank endorsing marijuana decriminalization for the first time. Advocates believe that 2019 could finally be the year for far-reaching marijuana reform in Texas. www.marijuanamoment.net

U.S. Government Seeking Research into Cannabinoids, Terpenes:Tetrahydrocannabinol (THC) — the marijuana compound known for getting you high — is the most well-know cannabis constituent. In recent years, cannabidiol (CBD) has garnered attention for its non-intoxicating medicinal properties. Now, the federal government is recruiting researchers to investigate how the dozens of other lesser-known cannabinoids and terpenes work and whether they can treat pain. It’s going to be a weighty task for any interested parties. There are more than 110 known cannabinoids and 120 terpenes, very few of which have been extensively studied. The federal research project will cover all “minor cannabinoids,” which is defined as anything other than THC, according to a pair of funding notices published by the National Center for Complementary and Integrative Health this week. In addition to CBD, the feds say they are particularly interested in research on the following compounds: cannabigerol (CBG), cannabinol (CBN), cannabichromene (CBC), myrcene, beta-caryophyllene, limonene, a-terpineol, linalool, alpha-phellandrene, alpha-pinene, beta-pinene, terpinene and alpha-humulene. www.marijuana.com

The Complicated Relationship Between IP Law & Cannabis: The relatively new industry revolving around the legal growth, distribution, and commercial sale of cannabis represents a golden (or, should I say, green) opportunity for emerging entrepreneurs. As one can imagine, given the complicated and controversial history of marijuana legalization, there are many obstacles and complexities that green entrepreneurs face in securing IP rights on their pot products. This article will specifically focus on the problems and solutions in trademarking, patenting, and licensing cannabis-related inventions. It is not impossible to secure IP rights on cannabis-related inventions, but there are a number of factors to consider and a number of complexities to be aware of. If you are a cannabis grower seeking to learn more about filing a plant patent application, you can find a patent guide available here. 420intel.com

California Rules May Black Out ‘White-Label’ Canna-preneurs: White-label deals can enable businesses without a license from the appropriate state agency to enter into the marijuana business under the umbrella of licensed operators. Proposed regulations from the California Bureau of Cannabis Control (BCC) that could end many “white-label” deals have some marijuana-related businesses concerned. The BCC in mid-October 2018 launched a 15-day public comment period on the newly proposed regulations. Those include prohibiting marijuana business licensees from conducting commercial cannabis activities on behalf of any entity that is not licensed under California’s Medicinal and Adult-Use Cannabis Regulation and Safety Act (MAUCRSA). Specifically, the proposed regulations state that “licensees shall not conduct commercial cannabis activities on behalf of, at the request of, or pursuant to a contract with any person that is not licensed under the Act.” The comment period ended on Nov. 5, 2018, and if passed, the rules could end up being in force by the start of 2019, according to BCC spokesperson Alex Traverso. Manufacturers, distributors, and unlicensed businesses inside and outside of the state and in Canada that are engaging manufacturers as co-packers could be affected, Geisser said. www.marijuana.com

Mitch McConnell Guarantees Industrial Hemp Legalization: Senate Majority Leader Mitch McConnell (R-KY) is guaranteeing that the 2018 Farm Bill will include his industrial hemp legalization provision after the Senate and House reach a compromise—ideally by the end of the year. “I don’t want to overstate this—I don’t know if it’s going to be the next tobacco or not—but I do think it has a lot of potential,” he said. “And as all of you already know, in terms of food and medicine but also car parts. I mean, it’s an extraordinary plant.” When industrial hemp is legalized, it will be “lightly regulated” by the U.S. Department of Agriculture, McConnell stressed. He added that . the Justice Department wouldn’t be involved and the “only federal involvement would be [hemp farmers would] be eligible for crop insurance.” www.marijuanamoment.net

Mexico Moves Closer to Legalizing Cannabis: The party of the president-elect of Mexico submitted legislation earlier this week that would legalize the possession, growth, use and sale of cannabis. If the legislation passes, it would be a major change to the laws currently in place in Mexico. Senator Olga Sánchez Cordero has been chosen to be the interior secretary by president-elect Andrés Manuel López Obrador, and said that prohibition has only contributed to poverty and violence within Mexico. The new bill would allow Mexican residents to grow up to 20 plants on private property as well as produce up to 480 grams annually. Public consumption would be legal but edibles would remain illegal. López Obrador will take office on December 1st and has promised to make drastic changes to the way that Mexico handles drug use and trafficking. He wrote in a 26-page bill that has been posted on the Congress website that in the 12 years that Mexico has been at war with the drug cartels that an estimated 235,000 people have died. He has suggested negotiating peace and amnesty for those involved in the illegal trade. 420intel.com

Survey Offers a Glimpse of What California Cannabis Users Prefer: Flower, Vape or Edible? New product types are increasingly accessible and driving trends in consumer behavior, but clear demographic preferences for ingestion methods haven’t truly emerged yet in California. The study found that while smoking still ranks highest among our California users who did express a specific preference, the overwhelming majority of them said they were up for everything. Vaporization of concentrated cannabis dabs was the top choice in the Los Angeles County area, while smoking was the most popular among respondents in the Sacramento area. A particular penchant for cannabis-infused edibles was also highest around Sacramento. Vaping is the most popular method among both men and women over 44, which makes sense given its reputation as a healthier choice. Survey users in general prefered to “Stay In” (22.2 percent overall) than “Go Out” (16.5 percent), suggesting that a large portion of cannabis users are still more comfortable consuming out of public view. 420intel.com

Where Jeff Sessions’ Successor Stands On Marijuana Policy: Anti-marijuana U.S. Attorney General Jeff Sessions tendered his resignation Nov. 7, 2018, one day after Republicans lost control of the House. That left cannabis policy observers scrambling to find out where the temporary replacement at the top of the Department of Justice, Sessions’ Chief of Staff Matthew Whitaker, stands on marijuana.

Blumenauer: Congress Will Be ‘Better Than Ever’ on Cannabis: The top cannabis ally in Congress sounded downright giddy Wednesday as he discussed what the midterm election results could mean for cannabis reform at the federal level. “The incoming Congress will be better than ever,” he said. “I think that we will continue to see more bipartisan progress.” Not only did Democrats take control of the House in Tuesday’s elections, but voters booted a handful of outspoken cannabis opponents, including US Rep. Bob Goodlatte (R-VA), who chairs the House Judiciary Committee, and US Rep. Pete Sessions (R-TX), whom Blumenauer described as “regarded by advocates as the No. 1 enemy of cannabis progress in Congress.” “Jeff Sessions is one of the worst Attorneys General we’ve ever had,” Blumenauer told Leafly in a statement. “Time and time again, he attempted to impose his own views which did not match the majority of the American people when it came to reforming our outdated marijuana laws. I look forward to working with our new majority in the House to finally end the federal government’s policy of prohibition, which continues to ruin lives—and disproportionately the lives of people of color.” www.leafly.com 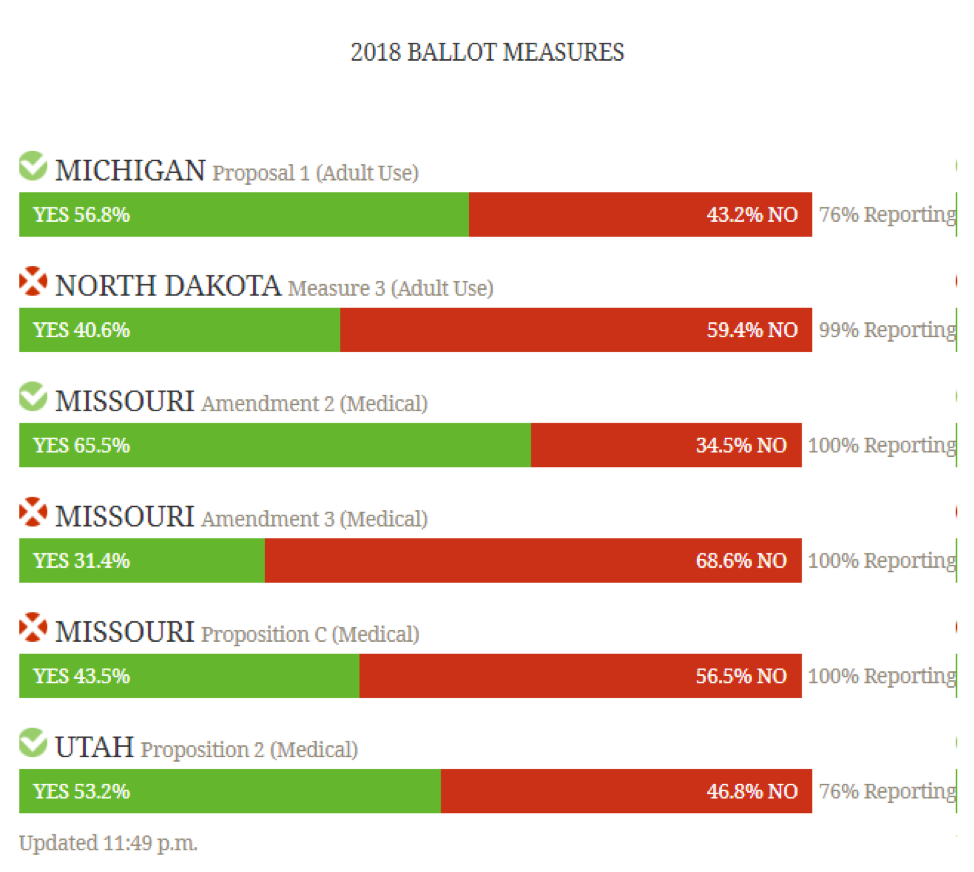 Here’s What we Know at the End of Election Night 2018: America still loves legalization. In fact, more Americans love legalization.

With the House of Representatives now in Democratic control, there’s fresh opportunity for a breakthrough on federal prohibition. The STATES Act, the Marijuana Justice Act, and other long-languishing bills have new hope, but still face an uphill battle in the Senate. The good news: 1 in 4 Americans now lives in a state where cannabis is fully legal for all adults. Canada just legalized nationwide last month. Mexico’s Supreme Court abolished cannabis prohibition last week. It’s time for America to get moving. www.leafly.com

Key Cannabis Legalization Wins Could Bring in Upwards of $2 Billion in New Sales: Marijuana scored a sweeping victory at the ballot box on Tuesday, with voters approving new markets in Michigan and Missouri that eventually could generate $2 billion in medical and recreational sales. And across the nation, voters installed the Democrats as the new majority party in the U.S. House of Representatives, improving the odds that lawmakers will pass federal marijuana reforms that benefit MJ businesses. Cannabis-friendly gubernatorial candidates, meanwhile, won in California, Colorado, Illinois, Michigan, New Mexico and New York. mjbizdaily.com

Colorado Issues Report Assessing Legalization’s Impact on Public Safety: The Colorado Department of Public Safety has issued its first-ever baseline report assessing the impact of adult use marijuana regulations in Colorado. Lawmakers in 2013 passed legislation authorizing regulators to conduct the five-year review, which seeks to better identify ways in which legalization has impacted public health and safety.