Magic Mushrooms Pills vs Synthetic Psilocybin: Which is the Better Option? - The Cannabis Investor

Magic Mushrooms Pills vs Synthetic Psilocybin: Which is the Better Option?

Magic mushrooms appear to be having a moment.

Not long ago, psychedelic mushrooms were ill-understood street drugs that had little perceived value beyond fueling a few wild nights you had in high school. But as the compound moves from the ‘recreational drug’ category into the realm of legitimate medicinal uses and mental health treatments, don’t expect to see patients chomping on woody stems and dried up caps.

The future of magic mushrooms — and psilocybin, the active compound found therein — is more likely to look like other mass-produced medications: pill form, synthetic, produced in a lab, and characterized by profit-friendly patents.

Psilocybin: the Magic in the Mushroom

In 1963, Swiss chemist Albert Hofmann — the man responsible for synthesizing LSD — received 100 grams of magic mushrooms from María Sabina, a Mazateca healer from the mountains of Oaxaca State in southern Mexico. Hofmann worked his magic and was able to isolate psilocybin, the ingredient responsible for the famous hallucinogenic effect. From there, he created a synthetic version of the psilocybin compound and made it into pill form, which he eventually travelled to Mexico to share with Sabina.

Hofmann’s synthetic pills represented the beginning of our understanding that transcendent experiences are possible from not just the actual magic mushrooms themselves but from a man-made version of the drug’s psilocybin compound. It was a breakthrough that continues to inform our scientific understanding of the substance even today, including the ongoing trials being conducted at Imperial College London and Johns Hopkins University.

Although psilocybin mushrooms can be grown with relative ease and at little cost, researchers prefer synthetic alternatives, which allow for highly regulated, predictable, and chemically consistent products. The natural psilocybin compound, on the other hand, simply doesn’t offer the degree of control needed to conduct rigorous studies.

“Clinicians need to know how much of a drug they’re giving to a patient, how long it takes to kick in, and how long it lasts,” explains Shayla Love for VICE. “They also need to be sure their drug isn’t tainted with other chemicals. It also helps to be able to mass-produce large amounts and not be threatened by variables, like weather, that affects agricultural products.” 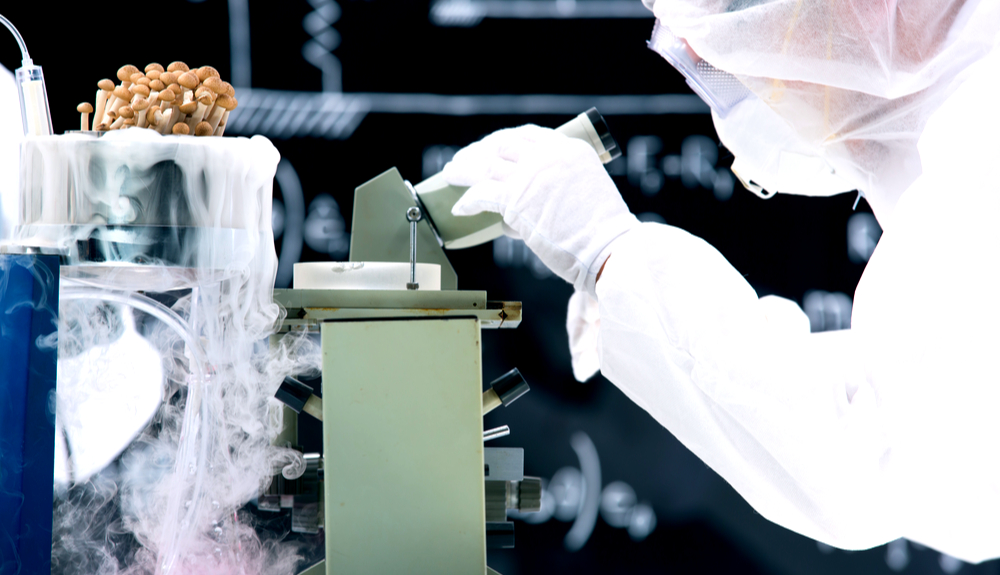 Synthetic Psilocybin Comes at a Premium

As we inch closer to fully legal and regulated psilocybin, all signs of its ‘magic mushroom roots’ will likely fade into the rearview. Goodbye piles of stems and caps, hello synthetically produced and widely prescribed medication.

The astronomical cost isn’t only due to the chemical production; it’s also a result of adhering to the U.S. Food and Drug Administration’s (FDA) strict drug-producing standards, commonly referred to as the Current Good Manufacturing Practice.

The Times They Are a-Changin’

In just the blink of an eye, illegal magic mushrooms are becoming legal synthetic pills, ready for pickup at your closest pharmacy. So it’s no surprise there’s some trepidation from within the psychedelic community. What will synthetic psilocybin mean? Exclusive patents? Shady investors? Big business cooking up big prices and even bigger margins?

“Companies investing in psychedelics, of course, will be motivated by a desire to improve the human condition, but they will also be motivated by profit, which invariably will skew things,” explains Adam Winstock, a medical doctor at University College London. “That’s the case with the pharmaceutical industry time and time again: Good intentions are marred by the drive to maximize revenue.”

Luckily, because psilocybin is a natural compound, it cannot be patented — but how it’s produced can be. We’re already seeing companies scrambling for patents for their synthetic production processes and intellectual property rights.

Because there’s no difference, chemically speaking, between natural and synthetic psilocybin molecules, the question is not about quality, but rather about the race to commoditize a substance that’s been spiritually significant for centuries.

“This is getting into non-scientific questions,” explains Matt Johnson, psychologist and Associate Director of the Johns Hopkins Center on Psychedelic and Consciousness Research. “I think people are reacting to the idea that someone would have the goal to patent anything associated with this whole area — which they consider sacred.”

Also Read: Here’s What You Need to Know About the Coming Wave of Psychedelics-Based Psychotherapy Clinics