Jim Cramer, the long-time host of CNBC’s hit television show Mad Money has been pretty quiet on the subject of pot stocks, likely a result of the sector’s brutal performance in 2019.

However, the former hedge fund manager turned TV personality is bullish on one particular cannabis stock which he discussed during the Lightning Round on a recent episode of Mad Money. For those not familiar with Mad Money, the Lightning Round is a segment of the show which consists of Cramer ringing the lightning round bell before taking calls from viewers in rapid succession.

Cramer‘s object is to give callers his opinion on their investments as well as showcase his overall knowledge of pretty much every stock known to man. The goal is to answer as many callers as possible before the buzzer goes off ending the segment.

During the Lightning Round on the December 10th episode of Mad Money, one caller asked Cramer for his opinion on the cannabis/pharmaceutical stock GW Pharmaceuticals (NASDAQ: GWPH).

Caller Jason from New York asked: “Most cannabis stocks were down over 3% today but GW Pharma was up over 6%, is this a long-term hold?”

Cramer responded: “I’ve said it’s a long-term hold, now remember, we had to do a piece which just said you had to sell cannabis stocks. I feel like cannabis and oil are two very very difficult areas but I think GW Pharma is actually a pharmaceutical [stock] that has cannabis as opposed to a recreational play.”

A month earlier, the topic of GW Pharma was also brought up during the lightning round on a November episode of Mad Money. Cramer blamed GW Pharma’s bearish price action on the Cannabis ETFs that he says have been pulling GWPH stock down.

Caller Joe from North Carolina said: “Thank you for your sage advice, it’s helped me to start my retirement at a younger age and I was interested in information that you might have on GW Pharmaceuticals.”

Cramer answered: “Ok, we like GW Pharma but we’ve said it’s part of the cannabis cohort and because of that it’s being pulled down by a lot of ETFs and therefore it’s still too early.”

In late September of 2019, Cramer had the CEO of GW Pharma, Justin Gover on the show. At the beginning of the episode, Cramer again accuses the ‘Cannabis Cohort” and Marijuana ETFs for dragging down the price of GWPH stock.

“I’ve been railing about the rise of ETFs for years, but sometimes the fact that everything trades as part of a larger basket creates some fabulous buying opportunities for you. Take GW Pharmaceuticals, GWPH, this is one we’ve liked for a long time, a British drug company with a twist. They study cannabis to find new medicines. Even though this is a legitimate pharmaceutical company with a terrific anti-seizure drug Epidiolex, its stock has been included in all sorts of marijuana ETFs which means it’s been hammered in recent months because the actual cannabis cohort has been absolutely awful. In fact, GW Pharma is down nearly 40% from its highs back in May even know the company is in great shape,” said Cramer.

Cramer went on to praise GW Pharma and the massive success the company has had recently which included the United States launch of Epidiolex, the European approval of its EU version Epidyolex and back to back strong quarterly earnings reports. Despite all of the bullish corporate developments, GW Pharma’s stock has been stuck in the mud.

Cramer believes that the “inferior companies” that he called “posers” which make up the majority of the cannabis ETF portfolios are the main reason why GW Pharma’s stock is so low right now. The Mad Money host thinks this situation has created a “remarkable buying opportunity” for long-term investors.

In June of 2018, GW Pharma became the first company to have a cannabis-based drug approved by the U.S. FDA when the company’s Epidiolex drug was cleared by the regulatory agency. Epidiolex was created to treat seizures in patients suffering from Lennox-Gastaut Syndrome or Dravet syndrome, two severe forms of childhood-onset epilepsy. The company’s European version, Epidyolex, was approved for sale in the EU this past September.

Justin Gover, the CEO of GW Pharma says the company is in the best shape it’s ever been with sales of Epidiolex beating expectations. With no serious competition for its cannabis epilepsy drug and the current low price of GW’s stock, now may be a great time to consider adding GWPH to your long-term portfolio.

Shares of GWPH stock closed Friday’s trading session at $103 per share, down 0.6% on the day. Since hitting an all-time high of $196 in May of 2019, the stock has declined over 47%. Looking at the 5-year chart below, it seems GWPH is building a base with $100 as its support level in preparation for the resumption of the uptrend.

The 1-year chart below the 5-year shows a closer look at the bottoming formation and the inverse head and shoulders pattern being formed. It’s looking like January could be a strong month for GWPH with the stock setting up nicely to reverse sharply off the bottom. Like Cramer, we’re also bullish on GW Pharma. 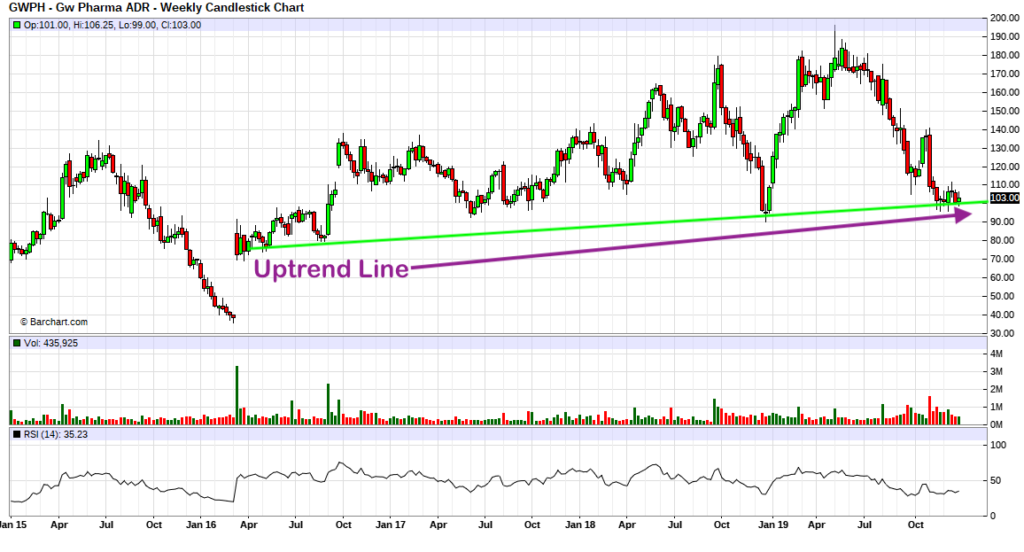 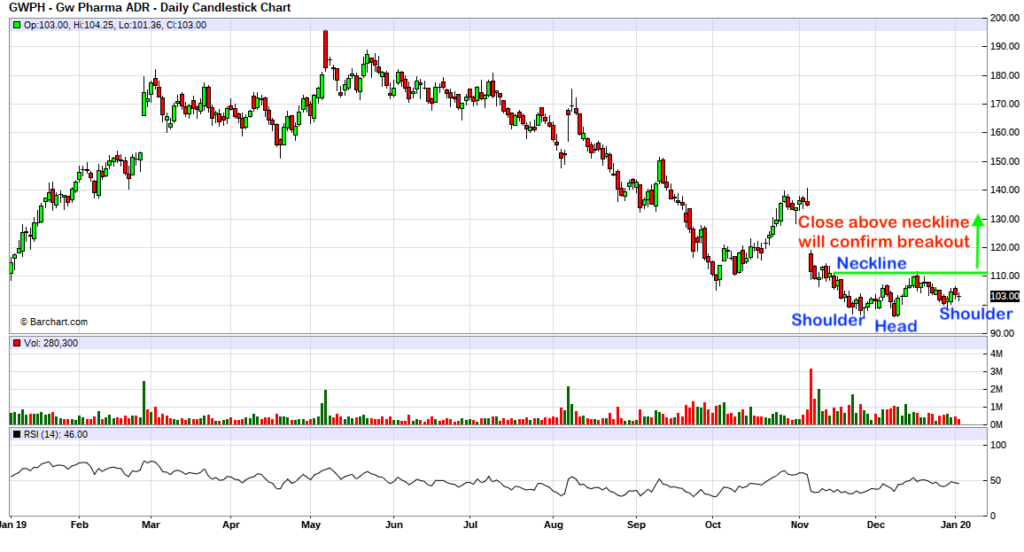