Is the Large Outflow of Money from Canadian Cannabis Permanent? - The Cannabis Investor

Is the Large Outflow of Money from Canadian Cannabis Permanent?

With the advent of legalization there has been a lot of talk of consolidation, disintegration and the scariest of them all bankruptcy. The real question is what kind of preparation will separate a company from the dying pack, to running with the alphas.

After an in depth analysis of North American Cannabis, anyone with investment experience will tell you that valuations were extremely high and a correction was “technically due.” But no one will likely take a stab at what valuations “should” be. Their next piece of advice to the retail investor would be “buy an aggregate basket of stocks” such as the HMMJ fund. The problem here is that while the next decade of realized profits may be rosy for some number of marijuana producers and retail or medical brands, not all companies will have a future in this market. That is just the rough reality, and we should begin to believe that the major success stories would have to start breaking off from the pack. I know I know, we’re so used to all ships rising with the tides… but investing in this space will not be that easy in the upcoming years.

This isn’t a reflection on the businesses that flood our venture exchanges and Canadian markets; so much as it is a realistic view on the prices and valuations. If we get too caught up in the stories behind the companies, we may forget that the current evaluations do not give nearly enough room for ALL companies in the market to continue growing at the rate they have been. Even many of the largest producers have much to prove domestically and have global markets to dominate before they can justifiably continue onward to valuations the size of Google, Facebook, Tesla etc. Does this mean it’s impossible for a handful to keep growing into long lasting impenetrable giants? NO, of course not! This is only the birth of an entirely new industry and many of the major players have planned accordingly to stay ahead.

Are the Major players in Canada still investable?

The major question is, are the more reputable players still investible? As I mentioned above, if you believe in the future of Cannabis, we think there may be no need to worry. A lot of pressure is being put on the industry from press, and sure a lot of companies seem to have larger eyes than stomachs, but just as the tobacco and alcohol industries took decades to develop, we are still on the cusp of a massive consumer driven industry. There is also a whole world of medical advances waiting to happen that will shift the entire way the globe may look at this plant. Anything is possible. The smarter companies also have a better view of the entire market including the US market and the leadership behind these companies have positioned them to be ready for any price compressions or supply and demand compressions that may come their way.

If we look back historically we can see that some major corrections of the larger players are not an uncommon occurrence, and the dooms day dialogue that follow such corrections are nothing short of normal.

Let us take a glance at the technical analysis, which shows that similar retractions of %25-35 have been normal in this sector. Back in January of this year Canopy Growth Corp. (TSX: WEED) (NYSE: CGC) had seen highs of $37 only to find its self retracted 2 weeks later down to $24. (A correction of 35%) Granted, Canopy Growth has been giving the public constant catalysts for growth and has been under the enormous limelight of speculation and major media coverage… so they may be a precarious example to use. But examples will ring true between most of the other LP’s in the space.

Looking at the Aphria Inc. (TSX: APH) (OTCQB: APHQF) chart below we see a correction of roughly %40 from the price on April the 2nd 2017. Only months later APH found itself climbing steadily back to the promise land. 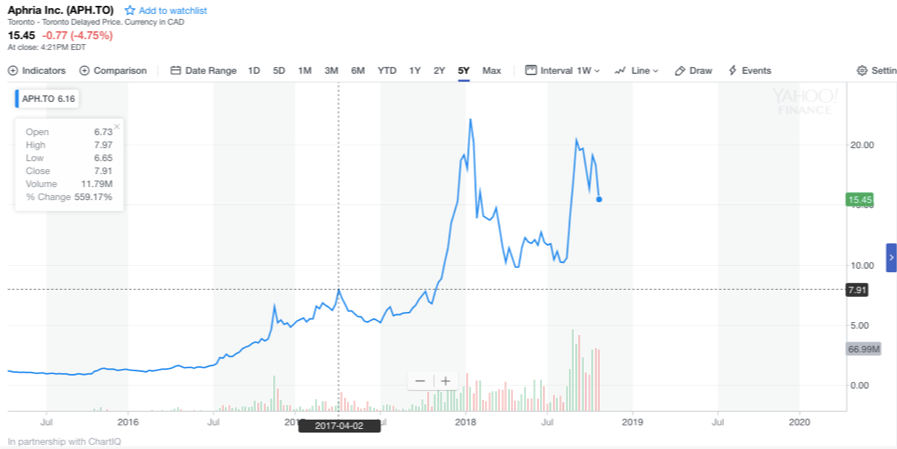 For the right cannabis companies the future is bright and this dip is nothing more than an opportunity for investors to re accumulate stock at what they feel are reasonable prices. No industry, sector, or reputable stock will move up consistently without periods of healthy consolidation. Remember as a long term investor you aren’t concerned with the chart today as much as you are concerned with the future of the company as a whole. It’s your job to connect the dots during times of weak market conditions.

Remember to continue to follow the story and always do your due diligence before planting your flag!